Although Mattel's Masters of the Universe Classics toy line proved popular enough to sustain itself through their online collector store and ridiculous subscription model, they weren't sure that success would carry over on to retail shelves. To test the waters Mattel decided to create redeco'd versions of the most popular characters and pair them with characters from the DC Universe, borrowing figures from the Classics line. Aside from the initial set featuring He-Man and Superman, none of the two-packs proved successful enough to continue creating them, so the tactfully titled DC Universe Classics vs. Masters of the Universe Classics line was cancelled, but not before three more sets were released. Let's look at one from the final wave. 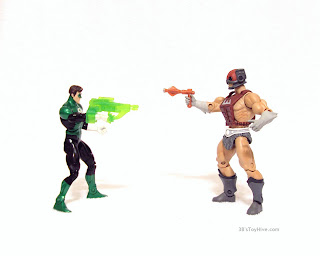 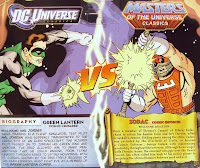 This is the third set of "DCUC vs MotUC" I purchase (after Luthor/Skeletor and Aquaman/Mer-Man) and I have a weird feeling of disappointed satisfaction. I'm not sure how to explain it, but I'll do my best to. Real quick, not that it's all that important to me, but what the hell is going on with the artwork on the cardback and mini-poster?! Do the artists even now what's going to be in the package before they start drawing? There's Silver Age Hal Jordan when it's the Modern Age version in the box and they got their Zodac confused with, um, Zodak because he's holding a cosmic staff instead of the blaster he's carrying in the package. You know what? Let's just move on to the toys...

Do you collect Mattel's DC Universe Classics? Are you even mildly interested Green Lantern? Well, Matty wants to make sure you have plenty of Green Lanterns, specifically Hal Jordan. You'd have to ask NoisyDvl5 over at IAT what the exact DCUC Hal Jordan count is, but I can tell you this is the sixth one I've owned (WGSH re-release, GL 2pk, All-Star, 5pk, Sinestro 2pk.). I'm certain he is the cause of my mixed feeling about the "value" in this set, but I'm going to dare to say that he is my favorite out of all the Hals I've owned, except for my custom "First Flight" version, which I've tinkered with continually. He reuses the same sculpt (which most of the line reuses, anyway) and features a metallic finish on the green parts of his costume, but unlike the TRU "All-Star" release, he features a glossy finish on the black sections just like the one from the Green Lantern vs. Sinestro two-pack. There's also a pearl white finish for his gloves. Altogether I like this deco on Hal much better than the previous "modern" version. Aside from the "First Flight" figure, this is my "go-to" Hal and I can always swap the head on either one to add a new member to the GL Corps.

If I'm not mistaken this is the first re-release of Zodac (not to be confused with Zodak, who is a different character) because the second time he was available on MattyCollector, it was just left-over, customer service stock. I wasn't into the line when he first hit and was too late to snag him the second time. I've had a couple of chances to buy him through other avenues, but it just didn't line up. When I found out about this set, I was much more interested in this comic-inspired version. There are two main changes with this version: his feet and his gloves. Instead of the three-toed Skeletor feet the first Zodac has (just like the original toy), this one has boots, just like the Eternian Palace Guards. Also, comic Zodac is sporting some nifty cosmic gloves! Okay, so Mattel just painted his arms, but that's not too bad since the Skeletor arms do have a seam at the top that goes almost all the way around the forearms. I think the gloves were supposed to be white, but something happened in production and they ended up grey like the interior of his belt. I don't mind it much, in fact, I think he looks better than he would have with white gloves. 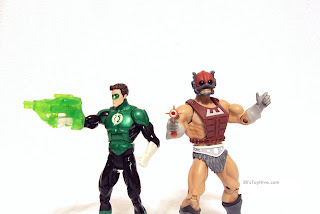 Accessories are light in this set. While what was to be expected with Zodac (despite what that mini-poster would have you believe), Green Lantern gets packaged with another machine gun construct. You know the one, it debuted with DCUC wave 11 John Stewart and then remolded in a darker green plastic for the GL/Sinestro set. This one is identical to Stewart's, though, which works better thanks to its lighter shade of green. Zodac, like his previous release, only includes his cosmic pistol, unless you count his cosmic vest as an accessory. I tried to get it off of him for some shots of his hairy Beast Man torso, but it seems to be glued and I didn't want to tear it apart.

I did have one QC problem with Zodac: his head. It was really loose and flopped around in a comical fashion, but I wasn't laughing. It also pops off easier than any of my other MOTUC figures. I wrapped a clear rubberband around the neck post and that help at least stabilize it enough to hold a pose. On GL, the additional paint apps caused some tightening of the joints. Nothing major, I just had to work them loose and thankfully he didn't suffer any chipped paint. 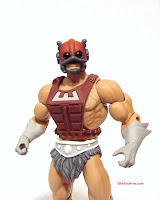 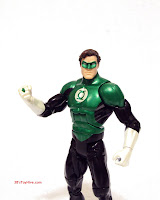 I think my mixed feelings about this set came from a combination of the cost and the heavy reuse and almost zero new deco. At least it was... I found the set a few days ago and it was marked on the shelf as being $29.99, which I felt was too expensive for this set. I walked around a bit, then I remembered that whenever I've bought a single MotUC figure from Matty Collector it ends up costing me over $30 after shipping and taxes, so in that respect this set was a great deal! And I realized I already had five HJs, one that was almost identical to this one, but I really liked this new deco and he's basically Zodac's other accessory. So I decided to bite the bullet and spend the thirty bucks, however, when the cashier rang it up, it was only $19.99! It was on sale and I didn't even know it! That's always a fun bonus when buying toys. For a little over twenty bucks I picked up the version of Zodac I wanted most and a new Hal, which at the very least could serve as a base for new GL corpsman. Overall, a great deal and a fun two-pack.
Posted by 3B at 12:25 PM