Heavy Labor is the second release in TFC Toys' "Hercules" series of transforming construction vehicle-themed robots. The series is an obvious homage to the classic TransFormers Decepticon subgroup, the Constructicons, and their combined form, Devastator. Heavy Labor is specifically based on Long Haul, who transformed into a dump truck and formed Devastator's lower torso. Does this second release build upon the foundation laid by the first "Hercules" figure, or give cause to quit now and skip the rest of the pricey team? Let's find out! 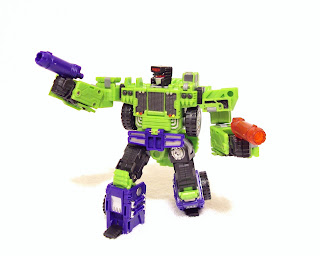 Heavy Labor's head features a shielded mouth, just like Long Haul, and features light piping through the back of his head, allowing for illumination of his visor and forehead section. HL's robot mode does its best to look like a solid wall of mean machine. His chest forms the front end of the dump truck, so his torso is just as wide in robot mode. His arms are appropriately blocky, very reminiscent of classic TF toys. Unlike the G1 Long Haul, Heavy Labor's legs have nothing to do with the dump truck's bed, allowing for better articulation in his lower appendages. TFC sculpted lots of mechanical details into HL, giving him a more "real-world" look as opposed to the clean lines of old-scholl Constructicons. 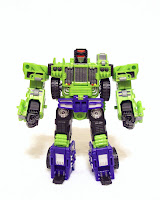 Converting Heavy Labor into his alternate mode isn't particularly complicated, but slightly more involved than Exgraver. His head folds down into his chest via a trap door in the truck's grill, then you flip up his waist armor, which doubles as the truck's front bumper. The arms straigthen out, with small flaps that close to make them look seemless, and then fold up behind the torso, tabbing into the mostly solid piece that forms the bed of the dump truck. 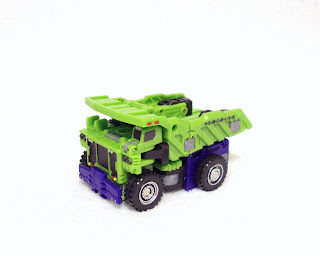 The hood flips over the driver cockpit to complete the top portion of the truck. Transforming his legs is a straight forward process: the lower legs flip over the upper legs, then the waist hinges towards the back, locking up with the bed. The front wheels slide into a lower position and he's done. The best part is that he's solid in his alt-mode. No loose panels, or unlocking pieces to worry about.

When the going gets tough and the Constructicons are overwhelmed, they rely on Devastator to even the odds. For Heavy Labor forming the mighty Hercules means he shifts into "crotch" mode. He forms what is essentially the giant robot's lower abdomen, waist and upper legs. It's a simple few steps away from his vehicle mode. HL's converted legs flip down at the waist, then rotate to reveal Hercules' waist with swinging panels over each hip joint to allow for forward movement of the legs. Because the legs are short and only have the connecting posts at the bottom, 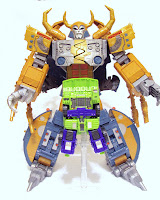 I'm assuming the other team members that form the lower legs will also feature the knee joints. At this point you just have to flip the entire bed down against his back, then flip out and rotate the cockpit, thus allowing the next-to-be-released figure, Dr. Crank, to plug into the top of HL's torso and form the rest of Hercules' upper body. The cockpit is a nice touch, it's on an arm that hinges off of the truck and has a ball-joint connection to the cockpit piece itself. 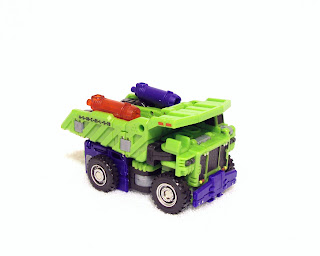 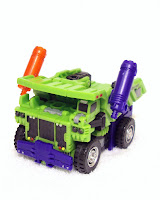 Like Exgraver, Heavy Labor includes two identical blasters, one molded in transparent red and the other in Decepticon purple, that fit in the robot's hands or plug into holes on the vehicle mode. The blasters aren't too intricate in their design, but I suppose that's due to the fact that they will combine with all the other figures' weapons to form a giant weapon for the combined robot. 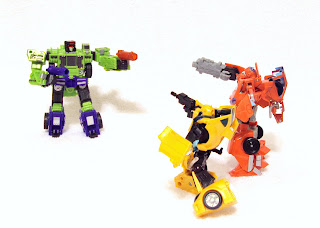 Long Haul was my favorite Constructicon when I was a kid because I loved his dump truck mode, so I was quite eager for this release. I'm happy to see that he's a great figure all around and loads (wink) of fun to play with. There have been several reports of problems with his hip joint, specifically the ratchet that swivels his legs forward and backward. I can already detect the issue on mine, so I haven't messed around with it too much until I hear some response from TFC on how to correct it. Hopefully, it' won't be too difficult because considering the cost of these figures, they should be damn-near flawless. The price, as with most toys these days, is the biggest problem. They way I see it, this will be the be-all, end-all version of Devastator and I will NOT be buying another, unless Hasbro miraculously designs a similarly scaled version. I've seen pictures of the upcoming MakeToy "Giant", but I'm not convinced by the alt modes and the fact you have to attach separate pieces for the forearms turns me off. One of the best parts of Hercules' is that all the pieces are integrated into the individual robots, which is a vast improvement over the G1 design. 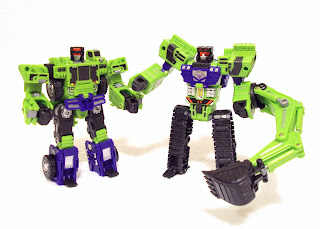 Well, next up is Dr. Crank (aka Hook), which thanks to some recent eBay sales I've already pre-ordered from Robot Kingdom and expect to see at the end of the month. Madblender (aka Mix Master) will follow in December and then I think it will be a couple of months before we see figures 5 and 6. It's a long wait, but I believe it will be worth it. 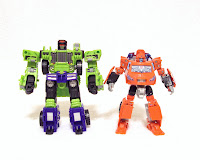 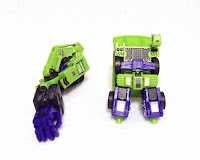