Didn't get your fill of TransFormers toys this past Summer with the release of the Dark of the Moon toys? Well, you're in luck because Hasbro is about to unleash an all-new line based on the (fairly) new TransFormers: Prime animated series (not to be confused with the previous animated series TransFormers Animated). The main line should be hitting toy shelves in the U.S. very soon, but in anticipation of it's arrival, Hasbro released this box set as a New York Comic Convention exclusive, which was later available on their webstore. Let's take a look if you haven't already and see what the set has to offer. 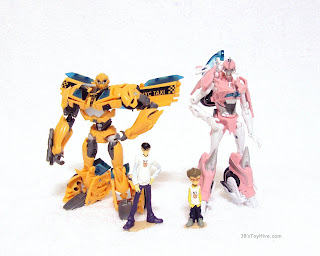 The set consists of Deluxe Class Bumblebee and Arcee along with figurines of two of the Autobots' human allies, "Raf" Esquivel and Jack Darby. Bee and Arcee are entirely new molds (as will be the rest of the "Prime" toy line), but feature decos specific to the NYCC event. 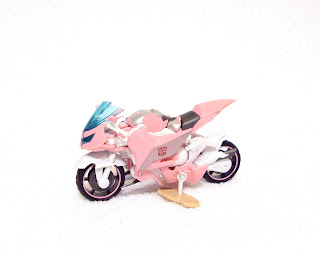 In TransFormers Prime Arcee's alternate mode is a motorcycle, or sport bike. This version features a pink and white deco inspired by her original, "G1" colors and was the primary reason I wanted this set. I figured she'd fit in nicely with my "Classics" TF collection. More on that later. In her motorcycle mode, she's out of scale with Bumblebe and the human figurines. I like the design of the bike and thankfully the bladed weapons are removable while in this mode.

It's a cartoonish vehicle mode, but looks just (color aside) realistic enough to possibly be something you would actually see on the road. There are plenty of small, sculpted details across this mode, especially the speedometer/gauges between the handlebars which are just begging for a Repro Labels upgrade.

The transformation is a pretty interesting process: the lower half of the motorcycle unfolds and separates to form Arcee's legs, the gas tank swivels 180 degrees from the seat to form her torso, and the panels on each side of the tank disguise her folded up arms. The most intricate part of the process is revealing her head, which is tucked into the gas tank, and separating the panels below the windshield to form her breast plates. The front wheel and handlebars are the only sore spot for me as the just hang of her back when she's in robot mode. The way the legs come together to form the enging and rear wheels is really cool and you can even keep them together to give her a "unicycle" mode.

Her robot form makes her look lethal, but majestic, much like another popular female alien warrior. The blades can plug into her forearms and that's good because she can't hold them in her hands. I like the pink deco a lot for nostalgic reasons, but the arms look too plain for me. There's some great detail on her hands and it would have been great to see a bit of silver thrown on them to highlight the sculpt. I guess I can always do that myself when I have the time, there are a few other TF figures that are in need of some silver paint (I'm looking at you, Ironhide!). 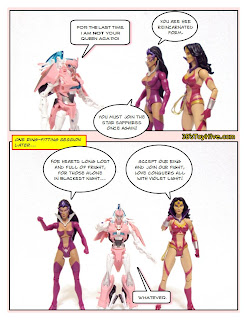 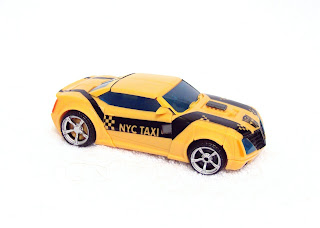 Bumblebee keeps his (now) familiar sports car alt mode and the one in Prime is VERY similar to the Chevy Camaro used in the live-action franchise. His racing stripes have been modified from the cartoon model's and include "NYC TAXI" on each side, along with some squares mimicking the familiar decorations used taxi cabs. It's interesting to note that the rear wheels are larger than the front wheels. I don't know if that true of the on-screen Bee or if it was done solely for the toy to aid in the conversion process. It looks cool because it works as a nod to hot-rodded muscle cars of the past. 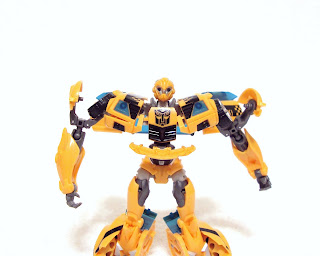 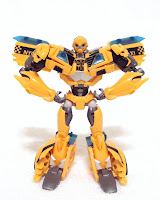 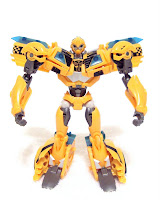 His conversion isn't too difficult, except a few tricky bits with his chest and shoulder area. Like his vehicle mode, his robot mode looks quite similar to his live-action version. There seems to be some confusion caused by the instructions and the package photos on how his shoulders are supposed to look when he's transformed. I prefer to keep them at his sides instead of the correct-to-the-animation model position rotated towards the front. That makes him look way too much like a gorilla, although it's difficult to avoid anyway. 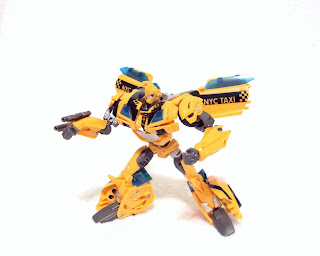 He features one accessory: a double-barreled blaster that plugs into either of his forearms. The weapon is also designed to fit beneath his car mode, but I think I wore down the tabs on mine because it doesn't stay in place in that mode. It would have been nice to get two of those for each arm. The sections below each headlight that slide down were REALLY tight when I first removed Bee from the box. It took some leveraging with the dull side of my Exacto knife to pry them open. I'm able to open them now using only my hands, but even then they're still a bit tight, especially the one on the right side. My only real complaint with Bumblebee's robot mode is the Autobot symbol on his chest is obscured due to the outer hood/front-end sections. I think that won't be an issue with the standard line release because it features a smaller logo. 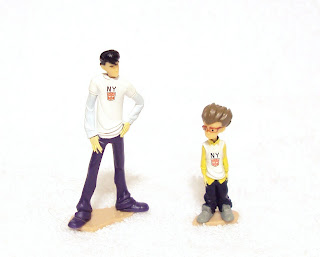 The humans in this set are both static figurines, but they do feature swivels at the neck for some expression. They are each attached to a stand that looks like gravel or sand, odd considering the box is designed to look like a paved roadway. Good news is you can remove the bases from the figures and they will stand on their own. I don't follow the show, so I really don't care for the human characters. These figurines are out of scale with the vehicle modes of Arcee and Bumblebee, especially the latter, so I don't see any appeal in them, that is, for me at least. 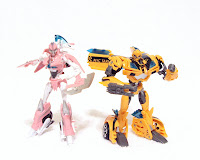 All in all, this is a pretty cool set and while I was most excited for this version of Arcee, which I do really enjoy, Bumblebee turned out to be really fun and I can't wait for the full line to hit retail. I've already seen a few reviews of the first wave of Voyager class figures (Optimus Prime and Bulkhead) and will most certainly be adding them to my collection. This Arcee blends in fairly well with the Classics figures, but I'll still be adding the regular, blue version and will use her as Chromia. Inspite of what one reviewer would have you believe, there were other female TransFormers before Arcee. I think as far as a "Classics" Arcee, the best bet will be the proposed "RC" by third-party creator Perfect Effect, which will utilize a more "G1" aesthetic in the head sculpt, but still feature a motorcycle alt mode. 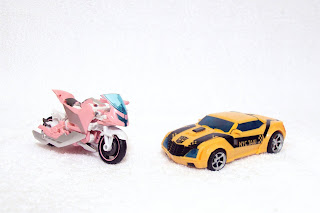 Bumblebee rivals Optimus Prime for the sheer amount of figures created and aside from the fact that this one is the first based on the new show, he's still a fun figure that fans of any TF incarnation can enjoy. If you don't care much for this Arcee or the humans in the set, I wouldn't recommend buying it solely for Bee, because very soon stores will be swamped with this mold and the "NYC" deco isn't enough to make him worth the $30 plus s&h. However, he is still a very nice figure. 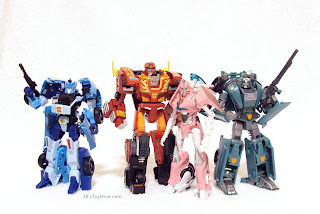