In my continuing effort to review all WWE Elite figures (or at least all the ones I own) I'm bringing you a figure from early on in the Elite series. Today we're looking at Randy Orton from way back in wave 2. Ironically I've already reviewed Orton before in the WWE All-Stars series of two-packs, which was released over a year after the E3 figure. Well, no time like the present... 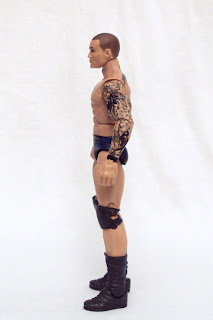 If you read the "All-Stars" review, you pretty much no exactly what to expect from this version, which also appeared in the end of the year "Best of" series last year. Randy's built on a slim, but ultra-ripped body, showing off extreme muscle definition. You may notice that the figure in my pictures has different knee pads. I swapped them out with Stone Cold's because it seemed that they each received the wrong pads. Austin looks way better with the closed pads, while the opened-back knee pads are more in line with what Orton utilizes.

The Viper has had plenty of ink done on his body since he first appeared in the WWE and it's all represented well on the figure. There is some writing on his arms that's difficult to make out, but it's a combination of the font used and the small size. His tights feature the same design as seen on the AS release, but here it's applied in dark blue paint, making it subdued against the black tights.

His articulation is the standard model we're used to by now: ball-joints at the head and hips, swivel/hinges on the shoulders and wrists, hinges for the chest, elbows, ankles and doubled at the knees, while swivels move the biceps, thighs and boots. The lower boots also feature "rocker" joints.

For all the fantastic work Mattel's able to do via digital scanning and virtual sculpting, a minor paint slip up can throw everything off. The right eyebrow on my figure is painted incorrectly. His face was sculpted with the right brow lowered and the left eyebrow raised, but the right eyebrow was painted arched as if it was being raised. This kind of makes him look intoxicated. I know the All-Star figure shares the same head sculpt and even has a similar app on the eyebrows, but the face looks better on that one. May be it has something to do with the fact that Mattel gave this Orton blue eyes while the AS version has brown eyes (!). Don't bother asking me Randy's actual eye color because I have no clue. But the figure looks better with dark eyes. 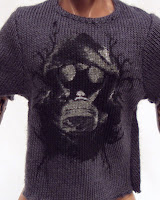 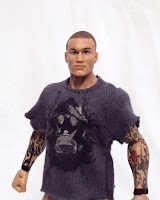 All "Elite" series 2 figures included the black WWE display stands with insertable cardboard name tags. Randy's true accessory is his "gas mask" t-shirt. It's a cloth shirt made of grey material and featuring a velcro closure on the back. It's rather loose fitting on Orton, not at all like the t-shirts he's worn on his way to the ring. Mattel seems to have crafted each of these cloth shirts in the same size all they're mean to be worn on the beefier Superstars because the look too big on guys like Orton and CM Punk who use the slimmer body styles. The design is neatly printed on the shirt, but was out of date even when the figure was first released. We'll just have to chalk that up to Mattel's action figure production timetable. 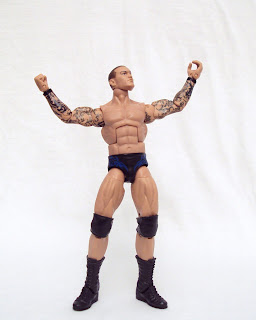 Although I understand how Mattel's design team came up with the parts library for the various shapes and sizes of WWE's roster, there something I find to be off about Randy Orton's figures. I don't feel the torso used accurately captures the Viper's physique. He just turned out just a bit too slim in my opinion. I guess he was right at the threshold between this torso and the bulkier one and the designers choose to go with the slimmer build. It's not completely off, but just enough to throw it off. I'm eager for Orton's upcoming series 12 figure, which will include a new, "scowling" head sculpt and a molded t-shirt, a first for the line. 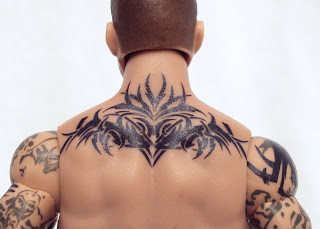 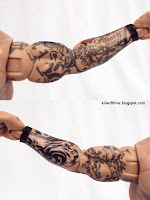