Mattel may have replaced their inaugural WWE Entrance Greats collector line with the better articulated WWE Defining Moments, but that doesn't mean the EG line was without it's gems. Case in point, "the Heartbreak Kid", Shawn Michaels, commemorating his entrance (and subsequent first World Title victory) at WrestleMania XII. When he was first released I thought he was a cool figure, but not twenty-two dollars cool, so I skipped him. But just a couple of months ago I spent several weeks hunting for bargains at the major discount stores and just a couple of days after finding EG Undertaker, I found HBK for 8 bucks and change! 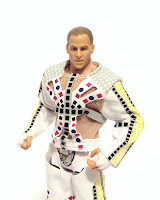 As is customary, I'll start the review with his entrance attire. HBK includes one accessory that makes up his entire entrance costume. The chaps are stitched to the jacket portion creating a jumpsuit. However, it's created from several different pieces and materials to achieve the look of Michaels' gaudy outfit. Most of the attire is made from a vinyl-type material. The torso area features a flesh-colored mesh material underneath the intersecting strips on the chest and back.

The whole thing is held together by a velcro strip down the back. Once you separate the sides you can slide the upper part of the costume off his arms, then down his legs to reveal his ring attire. You have to make sure to keep his feet pointed downwards while you remove the costume, taking your time so as to avoid wrinkles and creases in the suit. 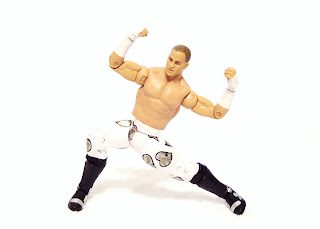 I think the above picture perfectly demonstrates why collectors prefer superior articulation, but I digress... 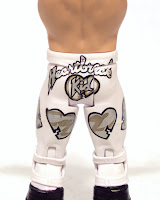 Once you have the entrance attire completely off you can admire HBK's ring gear. He shares the same body as EG Jericho, minus the head and with the addition of knee pads. Yep, this HBK is one of the rare figures that receives knee pads over his tights. The pads are adorned with the same broken heart logo displayed around the molded white tights. All of which are tampos with clean applications. "Heartbreak Kid" is printed in highly stylized text on Michaels' rear end. 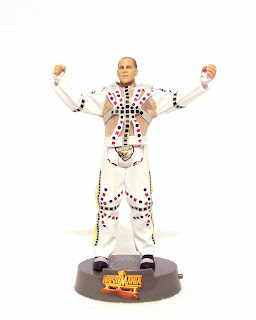 Aside from the entrance costume, HBK also includes the standard "Entrance Greats" musical display stand that plays his not-altered-since-the-early-90s theme song, "Sexy Boy." The stands feature diamond-plating on the top and a sticker commemorating the event the figure is based on. Unfortunately, the sticker was crookedly applied on my copy. There's a switch on the bottom that lets you select between a "demo" version of the song or an approx. 90 seconds of the tune. 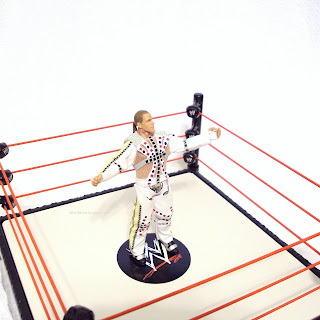 For $20, this figure was an easy pass for me (I was rooting for Bret Hart, anyway), but at eight and some change, he was must-have! As much as I appreciate the hard work Mattel puts into these and "Defining Moments", I think the price kept (keeps) a lot of fans away, and that's completely understandable. In the case of "Entrance Greats" it led to the line's demise. I truly hope the DM figures continue because they've been really nice, so far. But I really hope they can keep the costs down and if that means cutting out the stands again or (preferably) toning down the packaging, I'm all for it. 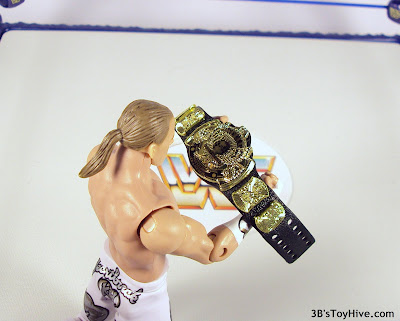 If you sat out on the EG figures, but are even mildly interested in them, even for just their entrance attires, make sure to check your local "second-hand" retailers (i.e. TJ Maxx, ROSS, Marshalls). I've seen nearly all of the EG figures in those stores and all for less than ten bucks. That's cheaper than the accessory-less Basic figures.