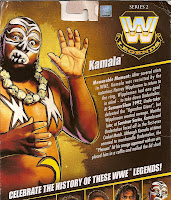 Today I'm finishing out my reviews of Mattel's WWE Legends series 2. Kamala is part of a wave that focused on wrestlers from the same era of (then) WWF, including: Iron Sheik, Jimmy Snuka, Rick Rude, Terry Funk and Jake Roberts. While I remember those other guys fairly well, my recollection of Kamala is really vague. In fact, if not for his outlandish attire, I'm sure I wouldn't remember him at all. As such, I don't have much to talk about in terms of the character, so we'll just be taking a straight-forward look at the figure and see what he brings to the collection.

Immediately you'll notice upon looking at Kamala, he's in the "super-heavyweight" class of grapplers. Billed at nearly 6'7" and weighing well over 350lbs, he's a whole lot of man. He's face sculpt is fantastically wacky and that rare instance within the Legends line where the expression on the figure's face matches the one on the card art. Black, white and brown paint are used for his beard, tribal warpaint and eyes, respectively. The applications are good, with just a bit of fuzziness that helps make it look realistic, instead of just sloppy.

Kamala's a bit doughy in the mid-section, so his figure presents the perfect oppurtunity to reuse Dusty Rhodes' torso. He shares his arms with Dusty, too, but the lower body parts, specifically his legs, are a whole different story. They are much more massive than those on Rhodes and feature new, barefoot sculpts, since Kamala didn't bother wearing boots in the squared circle. The feet are nicely detailed, you can make out each tow clearly, including toenails. I wonder if Mattel's design team digitally scanned the real Kamala's feet... His skirt is a cloth piece that's been inserted between the middle and lower torso. It's not removable, but you can flip it up to get a better view of the lower body. The skirt has a felt-type feel to it and is beautifully detailed in leopard print. Or is that jaguar? Cheetah? 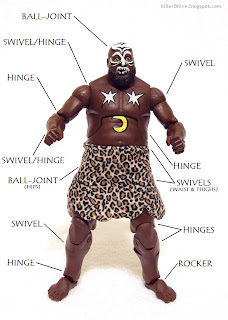 Kamala keeps the standard Legends/Elite articulation model. Mattel was wise to keep the calf swivel intact, inspite of Kamala being barefoot, which makes you question their decision to remove that point on a figure from another of their licensed toy lines. Kamala's points all move well, or as well as they can on a figure with his bulk. The loose ankle problem is still present and I think it's augmented because of his size, like it was with Bam Bam Bigelow. 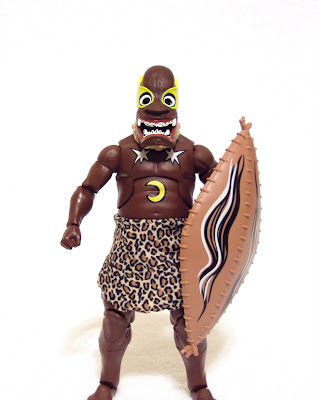 Kamala's accessory are strictly entrance-themed in nature, but I guess the shield could double as a weapon. He's mask is creepy/wacky/cool falling in with the tribal warrior theme. It's molded in brown rubbery plastic and has a harness that fits over his head. There are eye and mouth holes cut out that allow Kamala's face to peak through. He also has a necklace, which I'm not sure what it supposed to be made of, but the figure version is molded in one piece and has is finished with a scratchy texture. 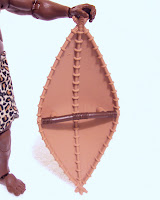 It slips on and off over Kamala's head. The shield is constructed from a couple of pieces. The front shield portion is molded to look like two panels stitched together. There's a handle piece on the inside where Kamala can hold the shield. It has a nice, authentic look to it and features clean paint apps. Being from series 2, Kamala also includes the WWE display stand and cardboard name tag, neither of which are particularly interesting and don't do much to enhance the figure itself. As you can tell, I don't miss them at all. 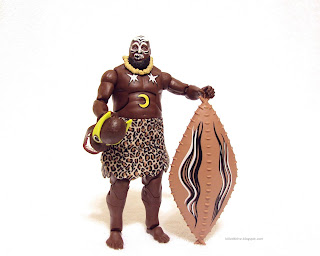 I can't say I'm a fan of Kamala and would have fine without him in my collection, but I found him at Marshalls for $9.99, and that's a great price for a highly-articulated collector figure. I don't know if Kamala was short-packed or just really popular, but I didn't see many of him at the "first-run" stores, even when series 2 was first released. The quality is good, though, and he's probably one of the best looking Legends figures to date. If you can find him at a bargain priced retailer, you'd do good to pick him up, especially if you're fan. Of course, if you are a fan of Kamala, you probably already did.
Posted by 3B at 12:10 PM