Hello all! And welcome to 3BTH's year-end "Best of" review for 2011. I know content's been light around here lately and I wasn't even sure if I would be able to get this list done in time, but technically it's still 2011, so I'm right on time!

Anyway, I've been working on this list in one form or another for the last month, but I decided to take a cue from my action figure-blogging peers, Lemonjuice McGee and Novelty, and pick one figure from each of the lines I collect. In some cases (like Transformers) I've distilled the various lines into one and in other cases (like Mattel's WWE lines), I've picked a figure from each series. So without further ado, come see what impressed me the most over the past twelve months!

2011 was an interesting year for MotUC. The line expanded to include never-before-released characters, even a few that never passed the development stage, but it also seems the line peaked in it's popularity as subscription numbers for next year were at an all-time low, forcing Mattel to scale back on it's output for 2012. I found myself a lot less willing to pay $30+ for a single figure off of MattyCollector this year, yet still did more than a few times.

With that said, the MotUC figure that delivered the most for me was MEF. That was a shock to me, too! I thought Vikor was really cool, the Palace Guards were lots of fun and I was sure Capt. Glenn was the best thing since sliced moon cheese, but MEF delivered a simple action feature that relays a complex idea: a being torn between three personalities. To me it's fantastic to have a figure with that "tri"-ality on the shelf and the toy looked great, even though I voted for the classic orange look. 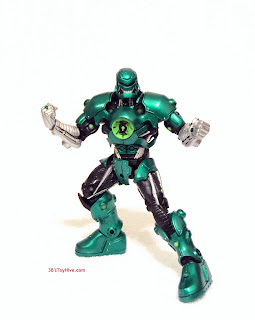 This year Mattel once again expanded it's DCUC line to include a spin-off featuring solely on Green Lantern characters. Through two waves of figures, they delivered several eagerly anticipated figures, but for me the best was the second wave's "Collect-and-Connect" figure, Stel. The robot GL appeared for the first time in action figure form and he was awesome! His size was a sore spot for many fans, something Mattel continues to struggle with (i.e. Swamp Thing, Bane, etc.), but overall, Stel is so highly-detailed and fantastically put together, I just had to put him on this list.

2011 was a landmark year for toy collecting for me personally because it was the year I returned to the Transformers franchise, this was mainly instigated by watching Dark of the Moon this past Summer. Although I (mostly) enjoyed the film, I didn't care for the corresponding toyline at all, but the fact Hasbro still had "classics" versions of G1 characters being released in their "Generations" line (and a few from "Reveal the Shield") was enough to get me back into everyone's favorite form-altering robots. The best out of the whole batch this year? Warpath.

His alt-mode is a tank, always fun. His robot mode perfectly captured the best of what you remember about him and this time around he's a highly-articulated "deluxe" class figure! Now this one was close, because if you read my Unicron review, you know how much I loved him, but Warpath beat him out on the basis of price and availability. For under twelve bucks, you'd be hard-pressed to find a better Transformer this year. And I wasn't the only who thought so. 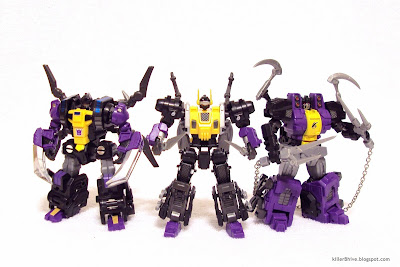 There's no denying the popularity of Third Party toys, it seems 2011 was a real boom year for the unlicensed industry, now whether that's a good or bad thing is up to you. For me the idea of creating original toys (albeit based on established characters) tugs at my customizer's heart strings. I don't approve of knock-offs, myself being a victim of a bootleg G1 Devastator, but the stuff companies like TFC, Spy Monkey and FansProject is coming up with is phenomenal and only serves to enhance what we get from the "real" toy companies.

For me the best non-licensed items (because you have to count them as a team) this year were FansProject's Thundershred, Stormbomb and Backfiery from their Crossfire: Causality series. But it wasn't just FP that brought "classics" versions of the Insecticons to us, Repro Labels deserves some of the credit thanks to the fantastic work they do with their aftermarket decal kits. With FansProject's already impressive catalog of items, I can't wait to see what the come up with next year!

I scored the last wave of Defining Moments earlier this month and I so very much wanted to get them reviewed before I wrote up this list, but fate had other plans. Bret Hart and John Cena turned out to be two of the best figures in the line so far, but I had to give the number one spot to the Hitman. While the inclusion of the Canadian flag and the classic WWE "Winged Eagle" world title are technically inaccurate to his appearance at "In Your House: Canadian Stampede", the total package delivered the Bret Hart figure we've been longing for since Mattel took over the WWE license in 2010.

CM Punk with a ninja mask. Do I really have to say anything else? Also, Zack Ryder really impressed me with Mattel's attention to detail. Orton scraps by series 8 Undertaker and makes the list of honorable mentions thanks to a new headsculpt and a new way to deliver t-shirts for our figures that surpasses the cloth versions in a couple of ways.

This one was another tough one: on one hand you have Randy "snap into a Slim Jim" Savage, who we tragically lost this year, and on the other you have a dominant tag team from the early '90s. But we're judging the toys and not the performers, so edge goes to Ax and Smash! A bit of inconsistency with their heights aside, Mattel delivered big-time on the accessories for these two, sure they're technically the same accessories, but they had to create separate pieces for the harnesses, vests, gauntlets and masks. It would have been easy to release them without the entrance attire, but the design team proved they can pull off some amazing accessories when they're unrestricted.

Yeah, this one is bittersweet. Fans of Mattel's Ghostbusters Classics (or whatever the hell they wanted to call it) scored a huge win last year when after much bitching, actually influenced Mattel to correct the torso on their prototype Winston with Slime Blower. The figure, originally planned for January, was delayed until the Summer, but when he arrived he had an appropriate torso sculpt to recreate the look of the Slime Blower's harness. The sad part is that after lackluster subscription sales, the Ghostbusters 2012 line was all but cancelled. We'll still be able to purchase the few figures that were announced at SDCC '11, but the future of the line past those releases looks bleak.

The high-cost aside, WWE Defining Moments delivered some amazing figures thanks to it's expanded accessory budget. There were a few missteps, but for the most part each release was phenomenal and I truly hope we see this line continue into 2012.

The character selection wasn't the problem. The rampant QC issues were. I had broken pegs on Riddler's neck and Mercury's wrist. Several collectors had issues with Robin's ankles and let's not even get into the paint/coloration issues on the Boy Wonder and Bane. Yeesh, it's amazing Azrael Batman made it out as one of the best this year.

Well, that sums it up for me. In all it's been a very fun year, although some budget issues really forced me to take a good look at my collecting habits, something that will only be amplified in 2012 as I just took a significant paycut. In a way, it's good because it forces me to really consider what is necessary in my collection and makes me appreciate each purchase that much more. I hope you've enjoyed following the Hive this year and hope you'll do the same the next.