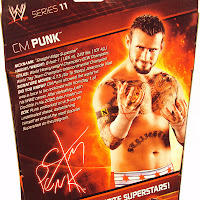 Toys R Us may be clogging their WWE Elite pegs with WrestleMania 27 figures, but it seems the holiday rush has cleared enough space at my local Walmart for them to start stocking series 11 and that means a new CM Punk figure! This updated Punk brings a few new items to the table, so let's see what he has to offer and find out if he's worth adding to your collection!

This is the third headsculpt Punk receives in the Elite series and the first to feature Punk's shorter, and current, haircut. It also features a sculpted beard along with a very P.O.'d expression on his face. The paint work is decent, although the left eyebrow on my figure has a small chip in the middle. There are a couple of smudges on his face, which makes him look a little dirty. I'm not sure how I feel about the contrast between his dark brown hair and black beard. I think some highlights would have helped his hair look more natural and make the figure more accurate. 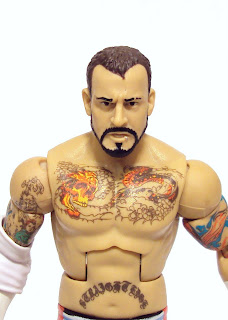 Below the neck the sculpting is identical to the previous four Elite Punks. Like the other figures, this receives a new deco on his shorts and kickpads, this time they have a white and light blue design with red stars. However, to modernize their Punk figures, Mattel had to add the huge tattoo across his chest and couple of other smaller ones as well.

The chest tattoo (which includes a dragon and flaming skull) is printed with the same quality and detail Mattel has put into the tattoos on other Elite figures, Punk included. What I'm most satisifed with is the design team's continuing effort to perfect them. The tattoos on Punk have been recolored to achieve a more realistic tone as opposed to the overly bright colors on the series 1 Punk. There's also the new tattoo behind his ear, which due to the manufacturing process had to be lowered on to his neck. It's an odd shape, but features the number 31 and four stars, all printed clearly. 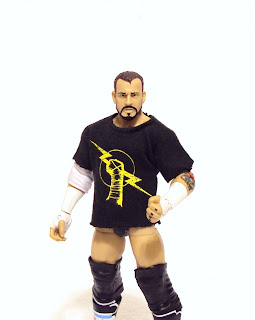 As far as accessories E11 Punk includes his New Nexus t-shirt with Punk's fist grabbing a lightning bolt and a Nexus armband, which is removable. Also removable is his white elbow pad that's been a fixture of the last several Punk figures in both the Elite and Basic lines. The elbow pad looks much more authentic now because Punk wears an actual pad as opposed to the wrap he used previously. That fact that it's removable just opens up your display options. He still uses the larger knee pads, which are separate pieces, but I don't consider those accessories. 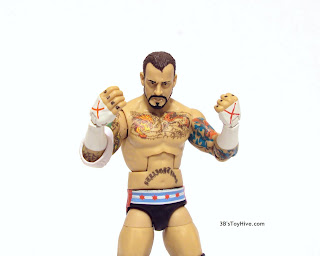 All in all, another great CM Punk figure that I'm more than happy to add to my collection. I would have preferred the figure's face to match Punk's image on the package, but the new head still looks good, minus the somewhat off hair color. The new tattoos go a long way to making him a must-have also. I like the combination of the colors on his costume and the now red "X" markings on his fists and it's a costume he still wears regularly. 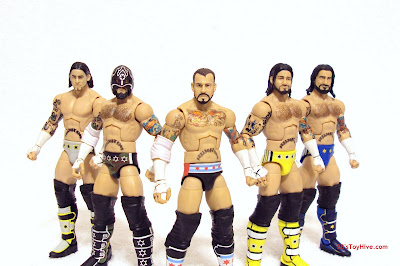