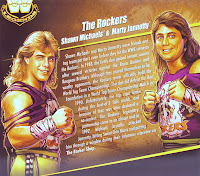 The glory days of tag team wrestling in the WWE are arguably behind us. Most teams nowadays do little more than serve as filler for Battle Royales and opening card matches. It seems that if two Superstars are popular enough as a team, they are promptly split up and repackaged as "singles" competitors. But thanks to Mattel's WWE Legends line, we can recreate some of the most iconic tag matches in wrestling history and that includes their latest tag team two-pack, the Rockers! 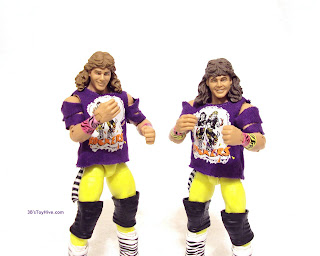 The Rockers were comprised of Shawn Michaels and Marty Jannetty, two young athletes that were a team even before they joined the promotion known as (at the time) World Wrestling Federation. The two displayed an explosive, cooperative offense that was not commonly seen in the WWF in those days. I, like many WWF fans, enjoyed watching the Rockers in my youth, so when this set was announced at San Diego Comic Con 2010, I was really looking forward to it. It would be more than a year before they arrived, so needless to say (but saying it, anyway!), expectations were high. 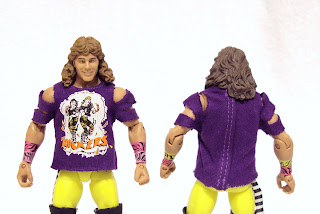 The Rockers had several different outfits they wrestled in, but for the most part retained common elements, like the zebra-print boots and frilly tights and t-shirts. As best as I can tell these outfits are based on their look in this video. The entrance t-shirts on the figures are constructed like many of the t-shirts we've seen in the line before, with the exception that the sleeves have been cut in two places to recreate the torn look of the shirts Michaels & Jannetty wore to the ring. To be 100% accurate Mattel would have had to slice up the shirts on the sides as well, but at this scale I think that would ruin the cloth, so the chosen alternative is quite passable.

The shirts utilize the familiar velcro strip down the back making the removal process easy. Each shirt features an image of the Rockers rockin' & rollin', struttin' & strollin, screen-printed on the front. In true Mattel WWE fashion, the printed image has plenty of clear details like shaded lettering, colored costumes and allows you to make out the faces on each of the Rockers. 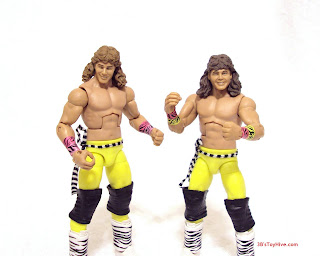 Once the shirts are off you'll notice the soft goods don't end with their entrance attire. Each Rocker is also sporting a sash around their waist, tied in a knot with the excess dangling off the side. Out of the package the knot was on the left side of each figure, I spun the sashes around to place the knots on the correct right side. The Rockers' tights also featured frilly, dangly bits all over, which is something Mattel understandably left off of the figures. Making them out of cloth would have been impossible, sculpting them would have failed to achieve the free-hanging look of each thread, so I approve of their decision to leave them out all together.

Sculpting is a bit of a sore spot for me with this set, but the problems aren't immediately obvious, more on that later. For now I'll focus on the head sculpts which are probably the most important part of the sculpts, anyway.

First up, the hair is big. Really big! You have to remember, these guys made their debut in the late '80s, when big hair was the thing. Even worse, the WWE has a record of being late to the party when it comes to trends and more importantly when it comes to abandoning a trend, so there you have it. I think Mattel went a bit overboard on Marty's hair, especially. The face sculpts are pretty great, effectively capturing the Rockers' happy-go-lucky smiles. Something a couple of other reviewers have pointed out is the cross-eyed look on Shawn Michaels. While he does have this defect now, it wasn't as obvious back in his Rockers days. You can't even make it out on his "Entrance Greats" figure which is based on his look only a few short years after he left the Rockers. That's more of a paint issue, bue considering they don't sculpt the eyes, I thought it was better to point out here. 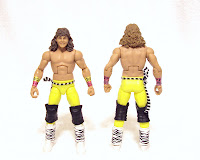 Just like some of the other Legends two-packs (Bushwhackers and Piper/Orton) Mattel was able to use the same sculpt to create both figures, or so I thought. While both Rockers share the same torso, arms and boots, Marty borrows his legs from Ricky Steamboat, which actually makes him just a bit shorter than Michaels. Mattel gets an extra point for height accuracy! Bravo.

But all is not well in sculpt land because Mattel tried to pull a fast one on us. For some reason beyond my comprehension they used the standard, below-the-calf, laced boots on the Rockers, hence creating a need for those bulky, over-sized knee pads. I've looked through as much historical Rockers footage as I could and best as I can tell the Rockers used the taller, over-the-calf boots with smaller knee pads. The trick is that the knee pads lined up right above the boots and I guess that's why Mattel used the larger pads. But the error was their choice of boots, not knee pads.

They wouldn't even of had to create new parts, all the necessary parts already exist for both of the Rockers! The over-the-calf boots have appeared on (in chronological order): Jake Roberts, Rick Rude, Jim Duggan and Randy Savage. You may be asking, "But what about the lower leg pieces? Where would those come from?" How about from the Road Warriors? Both of those guys are sporting over-the-calf boots (abeit a different style) and have sculpted wrinkles on their legs to recreate their tights. AND Hawk is about average height and taller than Animal. So you see why it can be a bit frustrating to see how the Rockers turned out.

Mattel went with plenty of reused parts to create this set, but it turns out they reused some of the wrong parts. The only new sculpting the Rockers required (aside from their heads) was the rubber sleeves that cover the laces on their boots. It's molded in white rubber and later painted with the familiar, and extremely tacky, zebra print. That same zebra print also appears on each of the Rockers' wrist bands. 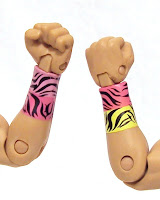 True to the Rockers appearance, each received two different colors on their wrist bands: yellow and pink for Marty, pink and light purple on Shawn. The colors may not be accurate to the appearance I linked to above, but it could have been true for a different occassion, plus they look fine with the current attire.

Something that continues to bother me a bit about Mattel's wrist decos is that while just painting on wrist tape is fine for wrestlers who use it, the same technique isn't as effective when it comes to wristbands. Sure, tooling new forearms just to add wristbands would be counter-productive (from Mattel's point-of-view), but they could have solved the problem just like they did with the boot sleeves. Molded them out of rubber and then paint them, allowing Mattel to slip them over the wrists in production. That doesn't seem to difficult and may be a good point to bring up to their design team. 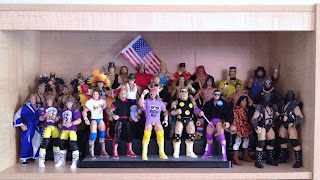 The Rockers were originally slated to be released in series 2 of Toys R Us' exclusive Legends two-packs series. The lackluster sales of series 1 forced them to cancel the second wave, which at the time of SDCC '10 was only revealed as containing the Rockers and the Von Erichs. Kevin and Kerry Von Erich were split up and released as single figures in Legends series 6 while the Rockers got the "exclusive" treatment, being made available on MattyCollector and (surprisingly) Ringside Collectibles. I order my set from RSC along with Elite 12 Randy Orton during their "Black Friday" sale, which let me get all three figures for under $50 after shipping, that's just about retail, so I had no problem ordering from them. Plus, it was a better deal than Matty where I would have paid $30 for the set, plus $12 for shipping and taxes, and this set is NOT worth forty-two dollars! If you can snag these for the retail price of $30 and somehow get them shipped to your for free, it's not a bad deal. I'm a bit disappointed that Mattel just kind of phoned-in the details on what will surely be their only Rockers set, but if you can look past the design team's shoddy work on the lower bodies, then you'll definitely find a place for them in your WWE Legends collection. 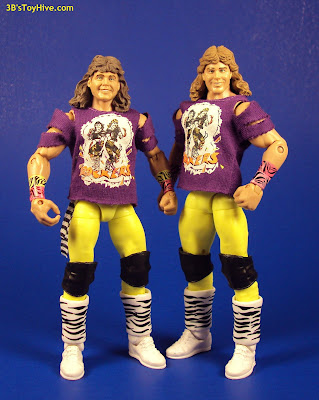 Last month I decided to do a little tinkering and "improve" some of my WWE figures. Mattel managed to botch The Rockers' knee pads/boots, so I decided to make some changes. First off, I removed the large rectangular knee pads and swapped in the medium-sized, square pads. These are much more accurate to what Michaels and Jannetty wore. The boots presented a bigger problem.

Like I mentioned above, the designers used the below the calf boots with a separate rubber slip cover. Sure I could find some better lower leg/boots for the figures, but that would most likely require some painting (which I always try to avoid) AND leave me without boot covers long enough to cover the whole boot. So I settled for just sliding the covers up a bit while the boots were still warm and thus improving the ankle articulation and closing the gap between boots and pads.

It's not a huge deal, but overall I think the figures look better and it was all done with minimal modification.