Last week, TFC Toys surprised everyone by releasing the final two figures in their Hercules series of combining robots that serve as an homage to the classic Transformers: Generation 1 combiner, Devastator, well ahead of the original release schedule of Spring 2012. I promptly placed my orders for the last two figures and Madblender arrived yesterday while Neckbreaker should be arriving today. TFC caught me a bit off-guard, so today I'm reviewing the fourth figure released in the series, Dr. Crank.

He's based on Constructicon Hook, doubling as a crane and serving as the upper torso and head for the combined Hercules. To date this series has delivered some fantastic modernizations of the G1 team and I'm obviously in for the whole set, but how does the good doctor measure up to the rest of the team? Find out now! 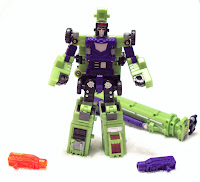 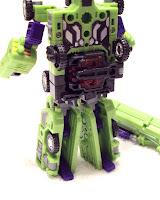 Dr. Crank offers up a sleeker, slimmer robot mode than any of the others we've seen in the series so far, however, I feel it's the weakest of his three modes. Due to the complexity of his gestalt mode and the build of his vehicle mode he suffers some deficiencies while in robot form. There's a solid piece of plastic jutting up behind his head which unfortunately restricts the light-piping gimmick for his eyes. That's a shame because I love his head sculpt and when the eyes are lit up, it looks even better! Under his helmet is a fully sculpted face with individual eyes that, while inaccurate to the visored G1 Hook, helps differentiate his face from the others and affords him a more expressive look.

Another issue I have with his robot mode are his feet, or should I say, lack of feet. It's not too bad on his left leg, where the crane's operating cockpit sticks out just enough to look like a stubby foot. The right leg, however, just looks like a plain old stump. I guess we can pretend ol' Doc Crank has a peg leg. The sad thing is that TFC designed flip out spurs on the back of his legs, to help stabilize him in robot mode. I don't see why they couldn't have put a little more effort into that and design something that would flip out towards the front also to give him actual feet. It may have been an intentional nod to the original G1 toy, though, so I guess that would be a positive. 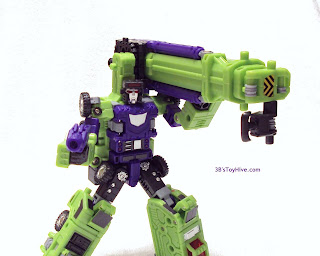 Like Structor, Crank's head is reduced to just a swivel joint. His arms connect to the body via hinges, but those are mainly for conversion purposes. They also swivel there, but feature a swivel & hinge joint at the biceps, too. Hinges work the elbows and that's where his arm articulation ends. The wheels on his shoulders are also on hinges as part of his transformation, but their ability to move allows for better arm movement, as well. Dr. Crank's upper body is mostly a solid brick, no chest or waist articulation. His legs can swivel forward, but backward movement is interrupted by the lower portion of his back. There are also ratchet joints that allow his legs to move outward. To accomodate his lower legs folding over the upper legs to form the front-end of his vehicle mode, there are two separate hinge joints in his knees. That opens up some posing possibilities and thanks to his large, blocky lower legs, he's pretty stabile. 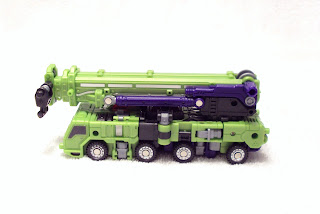 Converting Crank into his crane truck is a straight-forward process, the trickiest bit is rotating his arms and getting his shoulders into the correct position, but nothing too difficult. Basically, you spin his head around so it's facing the green post sticking out of his back. The arms fold in half against themselves with the shoulders tabbing into his head and the foreams pegging into the large post behind the head. For the legs, you start by folding the spurs back into the lower portion of the legs. Keeping the knee joint straight, you then fold the lower legs over the upper sections using the hinge below the knee, forming the vehicles front-end. Each half of the vehicle's cab pegs together then lines up with grooves in the middle section of the vehicle. The cab has two panels that slide up and fold when Crank's in robot mode. This process happens automatically when you change him into a robot and you just have to push down on them to get them back into place now. The second pair of wheels from the rear are on hinges that allow them to flip down and join the other three pairs of wheels on the ground. Finally, you plug the crane arm, or "boom," into the back half of the vehicle and you have yourself a crane truck. 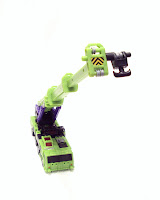 In this mode, Crank is a fun little construction vehicle with a working boom. The thing is long! Fully extended the boom is just over fourteen inches, comprised of three sections that slide into each other. It features a working spool at the base, three pulleys at the sheave and a removable hook with two pulleys of it's own. The base of the crane arm has fold-out stabilizers, two pistons that extend and compress as you raise and lower the arm and can also swivel. There is a small purple plug that connects to the squared peg extending from the spool, allowing you to rotate or lock the spool in place. It tends to fall off when you move it, so keep an eye on it when you're playing with Crank. Some fans posit it contributes to Hercules' combined laser rifle, but I haven't figured out where it could fit, yet.

Unfortunately, TFC did not include any cable or string with Dr. Crank for us to set-up the crane. I'm sure there are plenty of reasons why they chose not to, but they did at least include all the necessary mechanics for us to "DIY" if we so please. There are a few fans that have worked it out and even posted how-to videos on the 'net, including this one. I tried it out, but it became really time-consuming and aggravating. Instead of wiring the entire boom, I'm going to try just running some thread between the sheave and the hook to create the illusion that the boom acutally has working cable in it. Alternatively you can just plug the hook on the side of the arm, keeping it out of the way, but not laying around.

Aside from Dr. Crank's boom (which makes up almost half of his vehicle mode), two blaster guns are included in the package, just like we've seen with the other Hercules figures. The cool thing is all of the guns combine to form a giant rifle for the combined figure. The final two figures' weapons will form the base and handle of the rifle when combined. As a cool bonus, you can actually extend Crank's boom and use it as a club for Hercules. 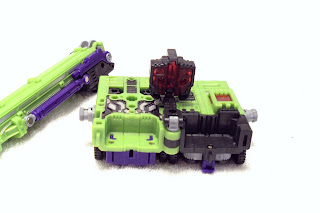 Dr. Crank's final mode, and arguably his most important, is his gestalt mode where he essentially breaks in half and extends several pegs around his vehicle mode to form Hercules' upper torso and head. No real trick here, just remove the boom then bend him at the big hinge on his left side. There's a latch on the top that flips over to lock the two halves in place. 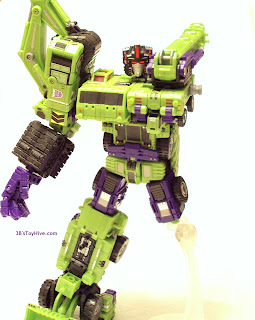 Hercules' head is face down against the vehicle mode. It's attached to a swing arm via a ball joint. The arm rotates around, then flips down to tab into the latch holding the the upper torso together. Flip up the giant's head and there you have it. Now the pegs that connect to the other figures are a bit tight, so you may need a tool of some kind to help you flip them out of their slots. There are two pegs underneath Crank that end up side by side when you fold him in half. Those pegs plug into Heavy Labor, which forms the lower torso. Then there are pegs on either side of Crank's body where Exgraver and Necbreaker connect to form the arms.

Everything links up securely. The odd thing is that Dr. Crank has eight connecting pegs when he only needs four. I don't know TFC added the extra ports just to keep him symmetrical or if they are used in some sort of "secret" combination mode. There are no shortage of extra pegs and pegholes on Crank or the other figures that do contribute to the "secret mode" theory, but I haven't figured it out, yet. Perhaps when I have all six together, however nothing has emerged online, either. 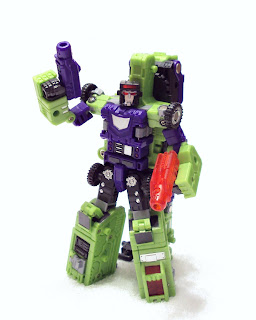 It's hard to believe I ordered the first Hercules figure (Exgraver) back in July and kind of dreaded getting Dr. Crank because I originally thought he would be the last one, leaving Hercules only two-thirds complete, until March and April. I'm happy we're getting the final two figures well-ahead of schedule and can't wait to have the completed Hercules on my shelf. Dr. Crank has a rather simplistic robot mode, but fantastic gestalt and vehicle (Heavy Labor must be pissed!) modes. If he was a stand-alone 'bot, I'd say he's an easy pass, but as part of the Hercules team, he's absolutely essential! The fact he combines with other robots as part of a bigger robot is what makes him well worth the price.

Stay tuned for reviews of the final two figures and their combined form, Hercules! Coming soon! 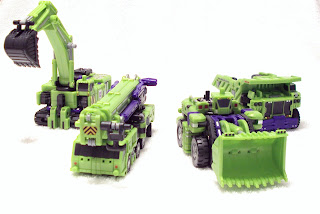 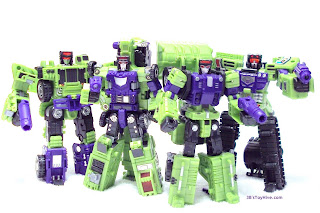