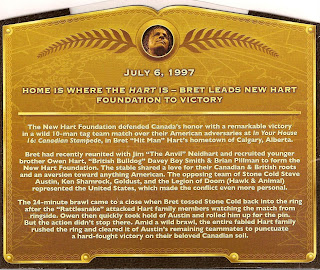 The best there is, the best there was, the best there ever will be. He is Bret "The Hitman" Hart and his first ever Mattel action figure was my pick for the best WWE Defining Moments figure of 2011. There's really nothing to complain about with this figure, so let's jump ahead for a gushing review of the Hitman! 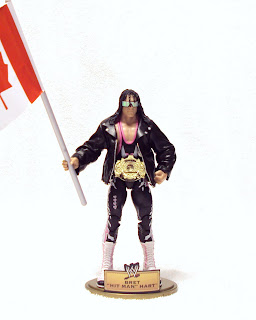 Our first Mattel Bret Hart figure is inspired by his appearance at WWF In Your House 16: Canadian Stampede, which took place in Canada in 1997. Although the figure includes the classic, "Winged Eagle", WWF Heavyweight Championship belt, Bret Hart did NOT hold the title during this event. The Undertaker did. And he didn't come out carrying a Canadian flag, either. However, given the significance of the event and the deluxe nature of the "Defining Moments" line, I totally understand, and am truly satisfied, that both items were added to the figure. 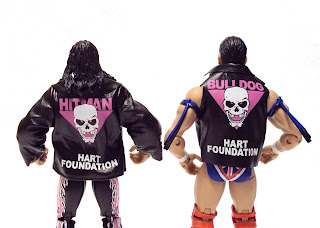 Hitman's sporting his trademark black leather jacket. It's made of faux-leather with a silver piece stitched in the front seams to create a zipper effect, just like we saw on the British Bulldog's vest in WWE Legends series 3. Bret's jacket features his Hart Foundation logo on the back with his nickname printed across the top. A few silver touches have been painted on the jacket for the button and stud details. Overall, it looks fanstastic and fits very well on the figure.

Aside from the jacket, when it came time to create the Hitman, Mattel only needed to invest in tooling his head and his trademark sunglasses. The rest of the pieces necessary for Hart were already created. Bret Hart's trademark flexible plastic sunglasses are recreated here with a half-molded visor that features a shiny, reflective sticker over the front. Following all the accessory sunglasses we've seen from Mattel in their WWE lines so far, Hitman's are specifically molded to his head and simply slip in between his hair and face. 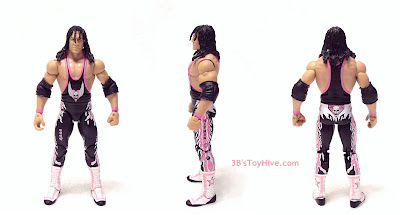 Don't recognize Hitman's torso sculpt? You should because we've seen it twice before and in the same package! It debuted with the WWE Legends two-pack of the Bushwhackers. It's modestly-sized torso with just the right amount of muscle tone to prefectly capture Bret Hart in his prime. The lower body is made up of the usual, tights-adorned crotch and leg pieces and under-the-calf boots. Hart also features removable elbow pads.

The design team may have had an easy time building the Hitman, but the true challenge was in his paint applications. Bret Hart's attire features lots of intricate details and they're all captured well here from the logo on his chest, to the flames down the side of each leg, to the four small harts on his right thigh. Everything showed up crisp and clear on my figure and even the pink trim on his tank top is clean. Easily one of the best paint jobs on any Mattel WWE figure and I think that says a lot about the figure when you consider it features white paint apps on black pieces. 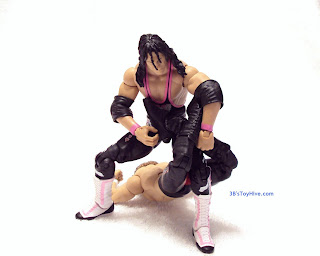 The other main selling point of DM figures is the added articulation, putting them in the same range as Elite and Legends. Hitman has all the usual points collectors have come to expect from those other lines and you can see it's possible to get him into a very convincing "Sharpshooter" pose. "Tap out, Pillman! Tap out!"

2011 was the year Mattel racked up the title belts in the various WWE lines, but it wasn't until this release in the Fall that we were treated to the classic WWF, "Winged Eagle" championship belt. You could argue that the Legends 6 Warrior's was out first, but I only found that one a week ago. Plus, Hitman's features the traditional black strap and, unlike a lot of the more recent title belts, features the vac-metal finish on the "medallions".

However, there are two small inconsistencies with this accessory, aside from the standard peg/hole thing. If you look at the real belt (or it's replica), you'll notice that the globe is blue, not black like it's been painted on the accessory. The other issue is with the strap itself; the belt tapers a bit where the snaps & buttons begin. Normally, I wouldn't be to bothered by it, but if you've seen the DM John Cena figure [to be reviewed soon!- 3B], you know that his US title features a tapered strap, so I don't know why they couldn't do that on the Winged Eagle belt. It's not like it's a one-off thing, that's the way it appeared even when it featured different color straps. Beyond that, it's very impressive and is a beautifully sculpted piece. 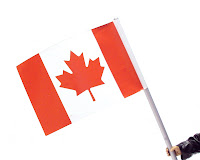 To round out the Hitman's accessory trifecta, he also includes a Canadian flag, which in the world of pro-wrestling can double as a weapon. It's the same accessory we saw with Jim Duggan in Legends series 3. Not much to say really, it's basically a plastic stick with a self-adhesive label forming the actual flag. The reason for the thick plastic staff is to accomodate the grip on reused hands. If they created a staff to accurately recreate the wooden sticks used for the flags, it would end up to thin for the figures. 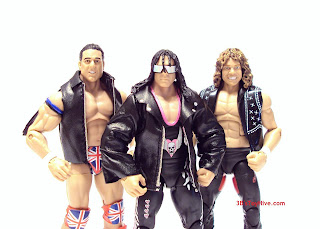 With this release of Bret Hart and the previous Legends series 3 releases of the "British Bulldog" and Brian Pillman, we're only two figures away from completing the Hart Foundation as it appeared at Canadian Stampede. I think Jim "The Anvil" Neidhart is all but certain for a WWE Legends (well, not in 2012) or WWE Elite "FLASHBACK" release in the near future. Perhaps even as a "Defining Moments" figure, but that seems much less likely. Sadly, more improbable is seeing an Owen Hart figure any time soon. And that's a true shame because the design team did such a fantastic job on Bret, it only augments my eagerness to see the "King of Harts" in this line. 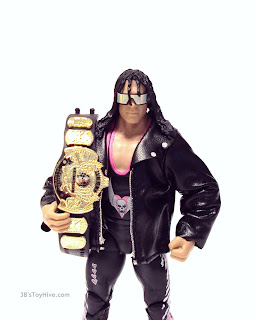 I ordered my figure off of Amazon.com a few weeks before Christmas at the standard $22.99 price tag and he qualified for free shipping, too. All I can say is that if you've been turned off by the price point for DM and haven't picked up any of them, yet, this is the one DM figure you should absolutely purchase. It's the best so far and if you're a fan of the Hitman, it's a no-brainer.

The "excellence of execution", execellently executed. 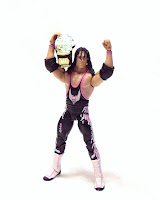 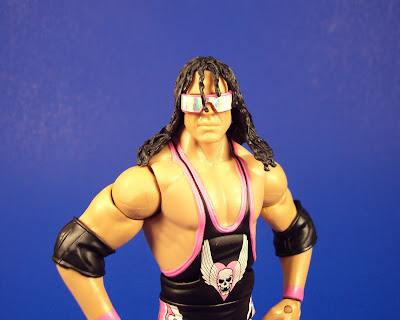 Continuing my "tinkering" in order to improve the accuracy of some of these figures, I made a couple of changes to DM Bret Hart. First I borrowed the pink sunglasses from the RSC-exclusive Hit Man, pealing off the reflective sticker from this release and placing it on the pink visor. Looks better on both releases, now. I removed the larger elbow pads and gave him the smaller versions found on figures like Triple H and the Rock.

Something this release was missing were the knee pads the Hit Man wore during the event. I obtained a spare set of the medium-sized, square knee pads (included with Randy Orton, among other figures) and after doing the ol' "Boil 'n Pop" to remove Hart's boots, slid the pads in place and voila!

Now he's accurate to his appearance at Canadian Stampede! 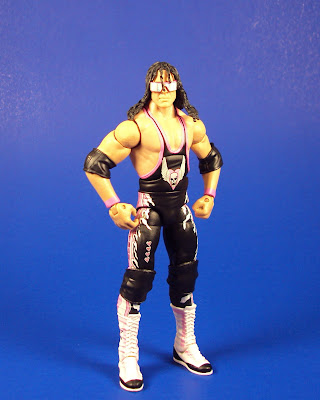