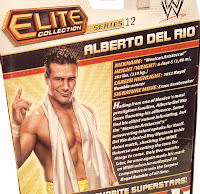 The WWE is often criticized for the lack of new Superstars today, but one man seems to have received in enormous push and has more or less remained in the top-tier of the roster. His name is Alberto Del Rio and today we're looking at his debut figure in Mattel's WWE Elite Collection. His second Elite figure is already scheduled for series 14, so let's find out what this version has to offer. 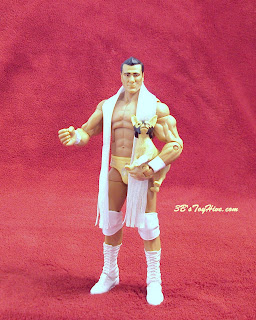 Initially I wasn't interested in ADR much, he's WWE debut seemed to be force-fed on us and I'm sure plenty of fans would agree that he basically came out of nowhere and became WWE champion no time. However, over the past couple of years he's proven himself to be a fantastic performer with great in-ring ability. A "natural", if you will. Most of the Hive's focus is on the Legends series and older Superstars appearing in the Defining Moments line, but I still enjoy the modern day WWE and, of course, love the toys. So ADR became a must-have for me eventually. 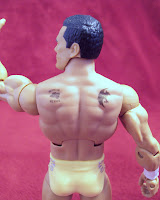 Mattel didn't have to invest much tooling on ADR's figure because every piece that comprises him was already in their "parts library". This may be his debut in the Elite line, but he has already appeared in the "Basic" series a couple of times. This figure reuses that head sculpt. The design team simply remolded series 8 Sheamus' entire upper body with a plastic color appropriate for Del Rio's skin tone. His lower body is made up of the moderately toned legs we've seen on CM Punk figures and the like.

Not that I doubt the superb physique of Mr. Del Rio, but I think the design team was overly generous when choosing the sculpts for his torso and arms. I think his build is more on par with the Steve Austin sculpt than it is with the Celtic Warrior. And, yeah, I can let the torso slide, but the arms just look wrong. I watched this video to gain some perspective, after all these are the same arms used on John Cena figures and I think I'm justified in saying these are not the correct arms for ADR. 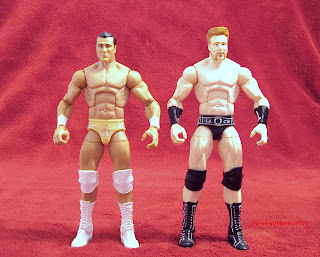 The head sculpt is spot-on, though. It looks perfect for him with the sly smirk and kind of squinty look in his left eye. He's sporting the same medium-sized knee pads and laced boots Sheamus wears, albeit molded in white rubber and plastic, respectively. Paint is extremely minimal on Del Rio; white paint is used to create his wrist tape and silver paint is applied on his shorts for his logos. The bird heads and stylized "A" tampos are clean and look very elegant over his molded yellow lower torso.

The figure also captures Alberto's two shoulder blade tattoos: a bird head (identical to those on his shorts) with the text "HECHO IN MEXICO" [That's "made in Mexico" for our non-Spanish speaking friends - 3B] surrounding it and a perched bird on his right shoulder. Both tattoos are cleanly applied, if a bit simplistic, but look accurate nonetheless. 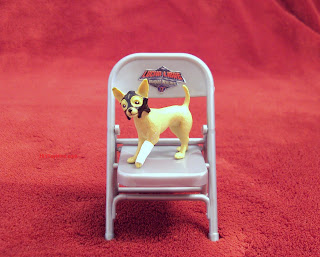 Alberto Del Rio includes two accessories, the first possibly being the funniest action figure pack-in ever: a lucha-masked chihuahua! The steel chair pictured above was included with Charly Malice from the Lucha Libre USA: Masked Warriors line. I needed something to elevate the dog for the picture and I thought this chair was appropriate. The dog is one solid, inarticulated piece, but does feature plenty of sculpted detail and paint apps. His little mask features a gold cross on the forehead and he's wearing a cast of some kind on his left front leg. There was a bit of paint smudged over the cast on his leg, but not extremely noticable unless you hold him up to your arm. I'm not familiar with the chihuahua backstory, but it seems to match ADR's pompous character perfectly.

The second accessory is ADR's entrance scarf. It's made of a silky material that's been folded to make it a bit thicker, then shredded at each end to create the frill look of the piece Del Rio wears to the ring. There's nothing that holds it in place, you just drape it over ADR's shoulders, but it falls nicely and looks very sharp on the Mexican Superstar. 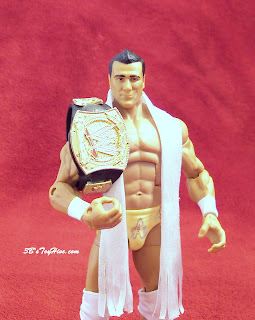 I decided this version of ADR was the one for me because the upcoming series 14 figure includes two accessories I don't need: a "Money in the Bank" briefcase and a WWE Championship (I already have two of them). Plus, this Del Rio features his debut attire (the gold shorts) and his scarf. The Chihuahua is an added bonus because it looks so funny. I'm a bit disappointed by the choice in parts for ADR, personally I feel he should have smaller arms, but it's not a deal-breaker. I did have some issues with his ankles not being able to support his weight (something I also dealt with when E8 Sheamus was released), but a couple of clear rubber bands corrected that issue. However, he's part of series 12 and we're still encountering this problem. It's starting to get aggravating.

Anyway, I found ADR at Target last week along with his wave-mates, Papa Shango and Kane. They're being sold for $17.99, plus tax there. That's very close to $20 a figure and it's making me uncomfortable, but not much we can do about it. The good news is that with this ADR, I don't need to buy any other version. Unless, of course, Mattel does something to correct those arms. 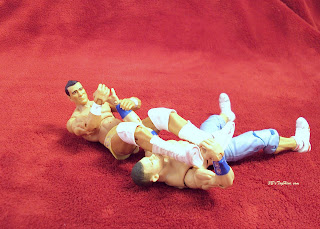