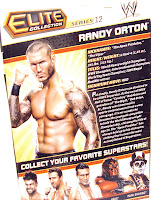 Now entering it's third year in production, Mattel's WWE Elite Collection continues to set the standard for pro-wrestling action figures with great sculpts, awesome articulation and fantastically detailed accessories. Series 12 was released in late 2011, but serves as a great preview of what to expect from the line in 2012. Here is a review of my first (and so far only) Elite 12 figure, Randy Orton.

Well first off you'll notice that the packaging has been radically redesigned and it looks good. The Elite figures are still boxed with a front window showing off the figure and accessories inside, but the box is now white instead of the grim black we've become accustomed to. That's also been carried over into the "basic" singles and two-packs series. Aside from the figure's name, Mattel also added text identifying what's included inside the box, in Orton's case it's his "Viper" t-shirt. I think this is great idea because it will help shoppers immediately determine whether something is missing from the package due to factory error or theft. 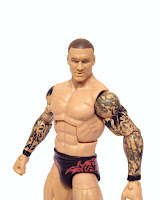 This version of Randy Orton is the same sculpt as his previous, Elite series 9 release, which is the same as his first Elite figure in series 2, with the exception of a different head. This is my first contact with the second head sculpt and I have to say I like it much better than the first one. It portrays Orton as angry and that works much better than the blank stare of his first figure.

All the decos are the same on this Orton, except his shorts now feature his "Orton" logo in red paint. I like the contrast between the red lettering/design and the black shorts. It's a good look for "angered" Randy. The tattoos still look nice and clean, too. I'm also happy to see that they managed to paint eyebrows on this figure that don't make him look like a drunken drag queen.

Unless you're solely hellbent on collecting every different color version of Randy Orton's tights, you're probably most interested in this figure for it's new, "Viper" t-shirt. I know I was. You see up to this point all the t-shirts in the line have been cloth accessories. While they are a nice touch, they don't look great on every figure. Often, the cloth shirts looked baggy, making the wrestler look scrawny. To remedy this, the design team came up with this molded t-shirt, making it look taut over the figure's torso. It definitely achieves the desired effect, but it's not without it's own problems.

First, it's molded in a soft plastic, which means it's not very flexible, hindering the chest hinge and immobolizing the arms at the shoulders. Second, it's meant to look very tight on the body, so getting it on can be an exercise in patience. It's basically a shirt that's been cut down the sides, under the armholes.

It's held on by three pegs on each side and getting all six pegs into all six holes is the hard part.

However, I think the pros outweigh the cons in this case. Like I stated before, it creates the desired appearance of a tight t-shirt on one of your favorite muscled-up WWE Superstars, but the best part is that since it's a solid piece on the back (just like the front), Mattel can add a second image to the shirt! Now they can reach a level of authenticity previously impossible with the cloth shirts. Randy's viper logo appears on the front while "RKO" is stylized on the back. It's a great touch and definitely wins me over in the "cloth vs plastic" t-shirt argument. Also, because the shirt is short-sleeved, you can still move Orton's arms at the elbows and even the biceps swivel. There's still a place for the cloth shirts in the line, but it's nice to have an alternative with even more display value, so "cheers" to the design team on this one. 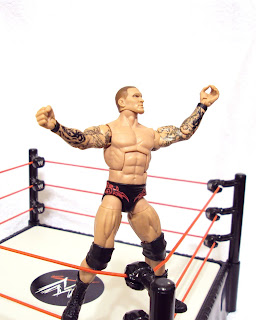 I ordered this Orton figure from Ringside Collectible along with the Rockers during RSC's "Black Friday" sale, when he was listed for $11.99, factoring in the 10% coupon code and shipping, he ended up being costing just about retail. However, I have yet to see any E12 figures in store, so I'd call it a good buy. If you're an Orton or Elite completist, this figures a no-brainer, but if you've already purchased one or none, you may want to take a good look at this one. It's my favorite version of Orton to-date!
If you haven't picked up a Randy Orton figure
Posted by 3B at 8:05 AM