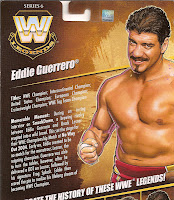 Today I'm reviewing my very first toy purchase of 2012, Eddie Guerrero, from the sixth wave of Mattel's WWE Legends. If you haven't heard by now the "Legends" series is coming to an end at retail, making series 6 the final wave you'll be able to find in stores. That had me a bit worried about whether or not I'd ever see the last set locally, after all it was technically released back in November, but all through the last two months of 2011 they were nowhere to be found. It wasn't until January 1st that I would find the first few series 6 figures at Toys R Us, including Kevin Von Erich, Texas Tornado and Guerrero. The other two figures: Kerry Von Erich and the Ultimate Warrior in his WrestleMania VI attire, were out of sight. My first choice was easy, "Latino Heat", Eddie Guerrero. 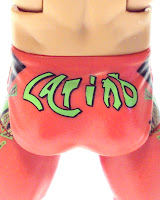 Mattel's WWE design team has missed the mark on the head sculpts of several figures and absolutely nailed it on others. I'm happy to see that they are in the latter category and totally hit the mark with Eddie Guerrero. They captured him perfectly in the sculpt and the only thing better would have been matching the sly, smiling Eddie on the card art.

From the neck down Guerrero is very similar to Brian Pillman from series 3. He has the super-toned torso that is bulky, but not as massive as Jimmy Snuka's upper body. Guerrero does, however, share the same arms as Snuka, which work great for Eddie. The lower body is most reused from Pillman, but Eddie has smaller lower leg pieces that plug into the boots, making him a bit shorter than Pillman.

The paint on my figure was mostly clean. His hair and facial details are painted in brown. I'd like to see some highlights added into the hair to bring out the detail of the sculpt, but it seems that's a useless complaint at this point. White paint was used to recreate Guerrero's taped hands and wrists. He has cross made up of spikes tattooed on the inside of his left forearm. Though small, the design is intricate and utilites black, yellow and red paint.

His tights are molded in red plastic and feature black, green and copper designs on each leg. The way the designs were applied require you to point his toes inward to allow for the graphics on his thighs to properly line up with the ones on his hip joints. This makes him stand in an odd pose, but I think it's true of Guerrero's stance and mannerism. "Latino" is tampographed on his rear with green letters and a black outline. There's a spot in the "t" where the green paint doesn't cover up the red completely and a couple of small chips in the outline. Nothing to obvious, though. His boots are molded in orange with black paint applied to create the flame effect. For some odd reason, Mattel added orange paint for the details on the front of the boots instead of just leaving them as negative space. I'm no expert in toy production, so it doesn't make sense to have an additional paint step here. Whatever. 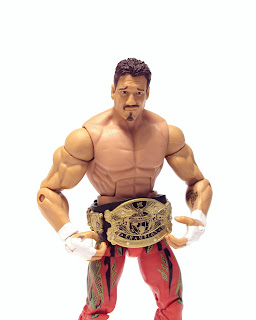 Eddie Guerrero is packaged with one accessory and it's a title belt, hence not really an accessory that would be specific to him. However, it's based on one of my personal favorite title belt designs, first introduced to WWE fans as the Undisputed Championship belt, the unification of the WWE Heavyweight Championship and the WCW World Heavyweight Title, first occupied by Chris Jericho. After the WWE split it's roster into two brands: RAW and Smackdown!, this belt became the new WWE Title, while a modified version of WCW's belt became the WWE World Heavyweight Championship belt (currently seen on Smackdown!). This "Undisputed" belt represented the WWE Title when Guerrero won it. It would later be replaced by John Cena's ridiculous (and currently used, albeit slightly modified) "spinner" belt. Because it first appeared as the Undisputed title, that's how I'll refer to it, or "Und.", to keep things simple and specific. 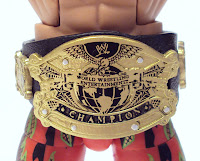 Right away you'll notice this belt lacks the vac-metal finish of the other belts we've seen in the "Legends" series. Because, just like Eddie Guerrero, wave-mate Ultimate Warrior's only accessory is a non-vac-metal title belt, we have to blame the Von Erichs and Texas Tornado for the dull-finish on the belts. You see, according to Mattel's WWE design team, these belts (which have crept into the Elite series as well) are a cost-saving measure dependant on the tooling and accessories within each wave/series. So basically the unfinished, painted belts are cheaper than the shiny, metallized belts.

While I was annoyed by the fact that the two belts in Legends series 6 would be the painted version, I wasn't as disappointed once I had Guerrero and his belt in-hand. It may just be the design of the Und. title, subdued by other belts' standards, but it looks nice and you can make out all the detail actually sculpted into it. Just like the other title belts we've seen so far, the Und. belt is composed of several parts: plastic plates representing the medallions, mounted on a rubber belt to simulate the leather strap of the actual title belts. All five of the Und. title's medallions are represented here and feature loads of detail aside from what's been painted on them. While I'm pleased with how the belt turned out, I'd still like to see a vac-metal version, maybe with a future Chris Jericho figure? 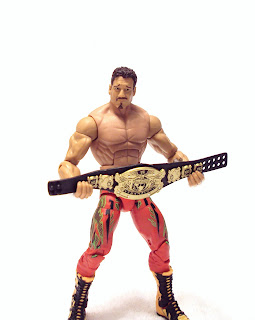 Eddie Guerrero makes up for getting short-changed in the accessory department thanks to a great sculpt and fantastic paint applications. Although the Und. title belt doesn't feature the nicer, metal finish, it's still a great representation and ups the total number of belts available in the line, which is something I think we all wanted to see in this first year of Mattel's license. WWE Legends are still selling for $12.99 at Toys R Us, which isn't too expensive compared to the "Elite" that retails for $16.99-18.99 in stores. Regardless, it seems series 6 is finally hitting across the U.S., so you may want to hold out just a bit longer before biting the bullet and ordering them online at a ludicrous mark-up. Fans of Guerrero, or pro-wrestling in general, will be pleasantly satisfied with this fine tribute to one of the greats.
Posted by 3B at 10:05 AM