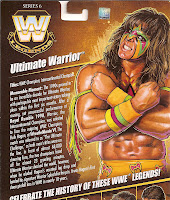 Don't have enough Ultimate Warrior figures in your collection? Have you skipped Mattel's first two UWs, waiting for the "perfect" one? Good news! Mattel recently unleashed their third Warrior figure (second in the "Legends" line) and it may just be the quintessential Ultimate Warrior action figure. But part of what makes an action figure great is not just the figure itself, but what accompanies it in the box and this version of the Warrior certainly has an odd choice of accessory. Jump ahead and find out if this Ultimate Warrior leads us to "Ultimate Victory" or ultimate defeat! 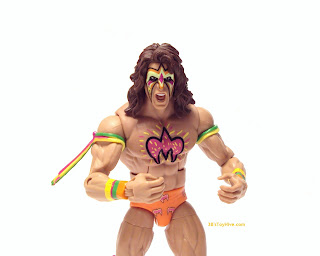 The Ultimate Warrior is one of the most polarizing men to ever set foot into the squared circle. I try to avoid his public statements as much as possible because they tend to dissolve whatever image I have of him as a larger than life personality in my memories. At WrestleMania VI the two biggest names (at the time) in professional wrestling collided in the main event: WWF Intercontinental Champion, the Ultimate Warrior versus the WWF World Heavyweight Champion, Hulk Hogan. In trying to predict which of these two juggernauts would emerge from the "Ultimate Challenge" triumphant, good friends became bitter rivals, brothers became enemies, old ladies salivated at the thought of so much pure testosterone in one place at the same time. The Ultimate Warrior would eventually go on to defeat Hogan and spew technicolor goo all over "Hulkamania". It's only fitting that Mattel would chose this event, easily the Warrior's most memorable match-up, to be the subject of their newest "Legends" release.

L6 Warrior is a near 100% reuse of his series 4 figure (and his "Defining Moments" version) with the only sculpted difference being the new head. That works fine for this version of the Warrior because his outfit didn't change much. The head sculpt is freaking awesome, though! It really captures the Warrior the way he should be recreated in plastic. As much as I liked the previous Legends figure, the head on that one was kind of disappointing, not because it didn't look like him, but because he was so... tame. For the WM6 figure, Mattel went all out with a Warrior that is pissed and ready to eat yellow and red. This version also features new foot pieces, eliminating the straps on the L4 Warrior's boots. 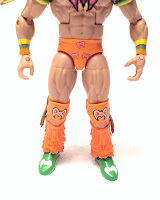 Painting the figure posed it's own challenge for Mattel's WWE design team. This time around not only does UW keep the multi-colored layers on his face paint and costume details (arm & knee tassels and boot frills), but he adds a huge Warrior logo on his chest and a bunch of smaller logos all over his shorts, knee pads, boots and even a small one right over his face paint (!).

Warrior's hair is a separate piece molded in a softer plastic, but the plastic used is too dark for him. This could have been remedied with some paint highlights, but Mattel seems to avoid those as much as possible. His "warrior mask" is composed of four different colors, not counting the yellow used for the smaller logo on his right cheek. Whast should be a green layer on his face turned out so pale that it's almost yellow. This seems to be present on all the figures including the one used for promotional pics. Thankfully, those are the only sore spots regarding paint on the figure. Everything else on the figure is painted phenomenally well and makes him pop with that trademark Warrior explosion of color and energy. 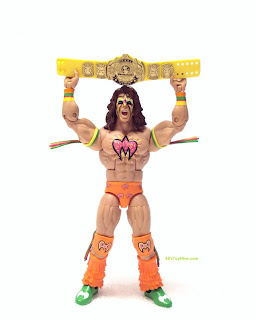 In Legends series 6 all of the figures ended up with one accessory apiece: the Von Erichs and Texas Tornado each received some entrance attire, while Warrior and Eddie Guerrero both ended up with title belts. Now, I was quick to blame the Von Erichs for the dull-finish on the belts, but I think some of the blame lies with UW, too. His extravagant paint decos definitely go above the average figure's production budget. I think I complained (i.e. bitched, whined, moaned, etc.) enough about the non-vac-metal belts in my review of Guerrero, so I won't do the same here. No, instead I'm going to complain about the choice of belt! 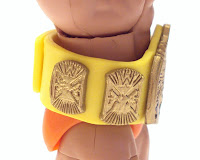 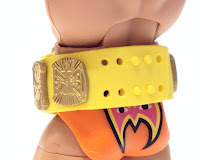 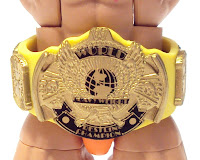 At WrestleMania VI, Ultimate Warrior held the Intercontinental Title, represented by his custom belt with a yellow strap. Hulk Hogan carried the classic "Winged Eagle" (WE) belt, with it's traditional black strap, just like the one included with Bret Hart in the "Defining Moments" line. After the match Warrior held both titles. He had several customized versions of the WE belt with different color straps, including: white, blue and light purple. But he did not have one with a yellow strap. Only his IC belt featured a yellow strap. I assume adding two belts in the package wouldn't "cost out" for the series' budget, so the design team apparently decided that merging the two styles into one belt was the best option. While I'm glad WM6 Warrior wasn't thrown into the "Defining Moments" line, that route would have yielded both belts, on the correct straps, with the vac-metal finish. But the better alternative would have been a new, slightly smaller mold of the classic IC belt on a yellow strap, with or without the vac-metal. Considering this figure is specifically based on his entrance at WM6 (by the end of the match most of his body paint was gone), it would have made more sense.

Sure, we've already seen the classic IC belt in the line twice before, but the WE belt was first released with Hart and will be re-released later this month in the "Legends" series with Andre the Giant. It's not like there was going to be a lack of that belt anytime soon. Instead we end up with this fictional version of the classic title. That said, it still looks nice on Warrior thanks to it's yellow strap. The plain black belts just look off against his colorful attire. I seriously doubt we'll ever see a yellow IC belt, but wouldn't mind having it some day just to truly complete this figure. 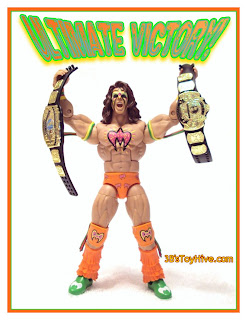 I have to admit that out of the three deluxe Warrior figures Mattel's made so far, this is my favorite version. His facial expression and paint deco really capture the essence of the Ultimate Warrior. There are a couple of missteps with the colors on his head and face, but nothing too bad considering the overall quality of the line. While the design team's choice of title belt here is inaccurate, the belt does compliment the figure and even looks great on his L4 release. You should be able to find him at your local Toys R Us any day now for the reasonable price of $12.99 (TRU online and most stores). I hope you do and avoid being gouged on-line, because he's not quite a "Defining Moments" figure and given his popularity, I'm sure he's the most abundant figure in the wave. I hope my criticisms didn't come off as too harsh, because I really do like him. In fact, I originally planned to give my figure to my brother after I reviewed him because he loves UW, but after I had him in-hand, I decided to keep him and buy one MOC for my bro.

To date, I've only seen this figure twice in-store and it was on the same occasion. I found two of him a little over a week ago and purchased them both: one for me, the other for my friend, who had been aiding me in my search. Since then, I've returned to the same TRU, but have yet to see anymore Warriors. Is he selling THAT fast? Or did a certain online store order up most of them? Don't know, but he's worth the space on your shelf. Happy hunting! 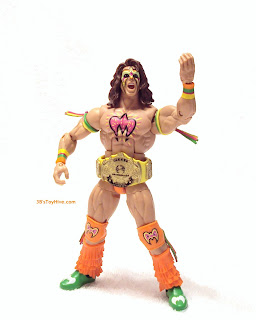 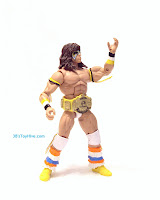 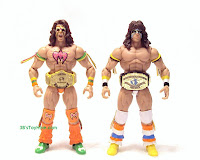