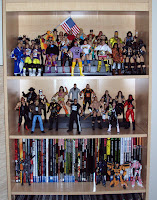 This has been a long time coming! Finally a new edition of "Currently on Display", the first of 2012, in fact. If you're new to the Hive, this is where I showcase what's being displayed in my home right now. To keep things fresh I usually change out the display about every month or so, but old favorites always return in new configurations and themes. The last CoD entry was back in November and I announced that it would be the last for at least a couple of months until I finished unpacking everything at my new place (which I moved to in December). I decided my first action figure display of the new year would be WWE Legends- related and my initial attempt was up by the end of December. However, thanks to a few additions throughout January, the display kept changing, until we arrived at this version.

Eventually the display ended up being only Legends, or Superstars, from the '80s and '90s. Some wrestlers blurred the line between the two decades and some (like the Undertaker and Shawn Michaels) had several different looks during the same time period. I decided to go with one version of each Superstar and made the top shelf mostly figures from the 1980s and the second shelf figures from the 1990s.

Looking over each of the displays two things are immediately apparent: (1) Mattel's released a lot more '80s-era Legends than from the '90s and (2) there is a serious lack of "Attitude"-era title belts. Where are the European Championship, Hardcore Title, Light-Heavyweight or even Stone Cold's "Smoking Skull" belt? Hell, they could have delivered the era's version of the Intercontinental championship by just remolding the strap on Drew McIntyre's in purple!

Hopefully both of the issues will be resolved by the end of 2012. 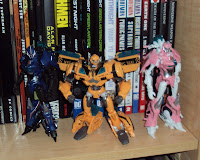 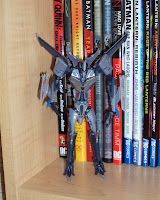 On the third shelf is my anorexic Transformers: Prime collection. I'm sure most fans are aware by now that the excellent First Edition wave was cancelled. For me that means no Voyager-class Optimus Prime or Bulkhead and no Cliffjumper. Some of the "Robots in Disguise" figures look cool, particularly Wheeljack, Soundwave and the new version Arcee, but the "Powerizer" Prime looks like crap compared to his FE counterpart. I won't rule out my buying into the line for sure, but it's not a priority on my list. The "Powerizer" Megatron does look awesome, however. Funny, but I think it's the Decepticons that will eventually win me over with this line. 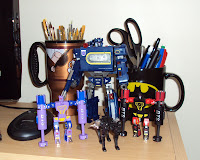 And finally there's a little corner on my desk currently occupied by BTS' version of Soundwave and his "minions", Frenzy and Rumble, along with the Transformers Universe release of Ravage that was included with Hound. I plan to write up a full review of this Soundwave (released as "Sonicron") and you'll get to read what will probably be the first overall negative review I've ever written, but I can tell you that this is the best use of this figure; standing stoicly behind his much-better produced BTS brethren. These versions of Frenzy & Rumbler (packaged as BTS Minions, Frequency & Tremor) are really fun and great little mini-figures that fit-in nicely with any TF "classics" display. Ravage is sporting his missile upgrade thanks to Dr. Wu's efficient Duel kit which also includes a G1-animated style weapon for Hound.

That's it for this month! Not pictured was TFC's Hercules which is now complete and "devastating" Autobot scum in my home, but will be featured in great detail on the Hive very soon. WWE Legends will probably stick around for another month as I'm awaiting the single biggest addition to the collection sometime this week (can you guess who it is?).

Until next time, keep those displays dust-free!
Posted by 3B at 10:05 AM