The fifth release in TFC Toys' unprecedented Hercules series of combining robots delivers an homage to the Transformers: Generation 1 Constructicon Bonecrusher and like his G1 counterpart, he transforms into a bulldozer and pulls double-duty as the mighty gestalt's left arm. Coincidentally the final two figures in the series (Neckbreaker along with Madblender) stirred up a bit of controversy between Devastator fans who felt a few of each of the figures' parts were cast in the wrong color. The color changes don't bother me much, but Neckbreaker does have a few shortcomings. Let's take a deeper look at this dastardly Decepticon! 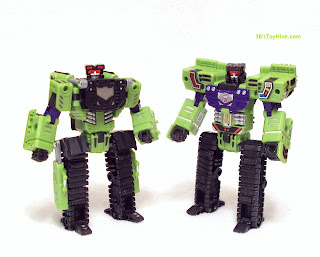 At first glance Neckbreaker looks very similar to his fellow arm-former, Exgraver, what with his broad shoulders, wide hips and tank tread-like legs. However, they don't really share any parts. While NB's legs look identical to Exgraver's from afar, on closer inspection you can see that they are newly sculpted pieces and even though his feet pop out in the same fashion, they include two little triangles on the front. 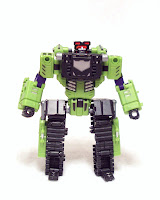 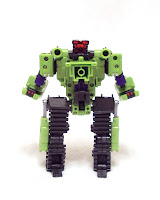 With Neckbreaker you actually have two ways of forming his feet: the Exgraver style (also depicted in the cardart) or by using the outer parts of his shovel (which is how he's packaged). I'll say that the fold-down feet are very stable, but thanks to the width of the shovel pieces, that method works very well also. I think I tend to lean towards the shovel feet just a bit more because it helps differentiate him from Exgraver even more.

Neckbreaker's robot mode is just as efficient as Exgraver's, delivering a robust robot with plenty of articulation. He has a nice blend of green and black. Some of the controversy is due to the black piece on his chest (which actually forms the center of his shovel in vehicle mode). The classic figure had a solid green shovel and it ended up forming the robot's chest, so I understand why some G1 fans may prefer that look. However, I'm of the mind that these are "classics" versions of the old toys and some modifications are not only necessary, but welcomed. Once we have a Repro Labels set on this guy, I'm sure all will be well [go Blue Lantern Corps! - 3B]. 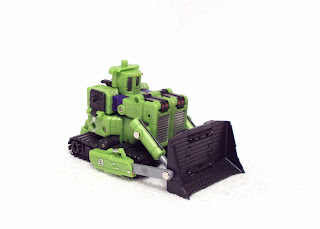 I'll go on record as saying Neckbreaker has the most complex transformation out of the whole Hercules team. Not that it's particularly difficult, it's just harder than the others. That's not a bad thing, but his vehicle mode does suffer a bit and is the worst part of Neckbreaker, by far. I'm not going to go over his entire conversion process because it would take to long. 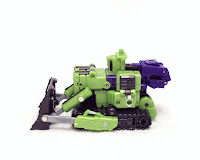 The main problem is the green crotch piece not folding down flat against the upper body. This causes the legs to angle towards the front of the bulldozer in order to plug into their appropriate posts. The whole procedure makes the front of the tractor look like it's taking a nosedive into the ground. You can kind of mask this by positioning the shovel arms in a way that covers up the frontend of the vehicle, but you can still tell that the crotch piece is jutting out the back. I think shaving down some of the plastic might help it fit flush, but I haven't tried it yet, and I'm not sure I will. Honestly, he's going to spend most of his days in arm mode.

The transformation of the shovel can be a bit maddeneningly. The plastic used on the shovel is softer than the rest of the toy and getting everything to line-up properly depends on working the stiff outer sliders and the very loose inner pistons. Although they're are a couple of tabs on each side of the center shovel piece, none hold tightly, so the shovel tends to come apart easily. You will eventually find that "sweet spot" where everything fits properly and stays intact. 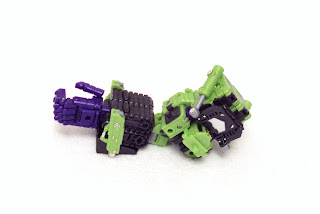 The conversion from bulldozer to giant arm is simple and very much like Exgraver's process. Essentially, you flip the treads out, then fold them in half to form Hercules' left forearm. The outer shovel pieces link up and fit against the forearm while the center of the shovel returns to it's robot mode position and presses up against the top of the bulldozer's engine. Like Exgraver, NB has a giant shoulder hinge right under his head which is where he connects to Dr. Crank.

The connection is nice and tight and the arm moves well. I'll go into more detail when I review the completed Hercules figure later this week. 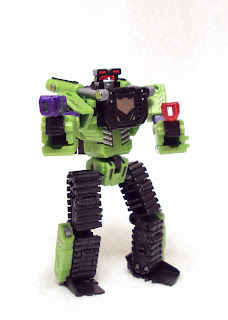 Neckbreaker includes three accessories (not counting Hercules' left hand): two blasters (one molded in Decepticon purple, the other translucent red) and a visor attachment. The blasters are fine and can be plugged into the vehicle mode, I'll cover those and how they combine with the other blasters to form Hercules' rifle in my Hercules review. Now, there have been some reports of fans receiving NB with the visor broken in half, luckily mine was fine, but I can tell you that it is very thin at the center (where it would fit over the bridge of the nose) and I'm sure could snap easily if you're not careful. The visor is an add-on piece to give Hercules the look of his animated G1 counterpart, but the instruction manual indicates that it can also fit on Neckbreaker. I tried placing it on NB, but it doesn't attach easily and I was afraid if I pushed harder, I'd break it. Personally, I think it looks silly on him. However, it looks great on Hercules! 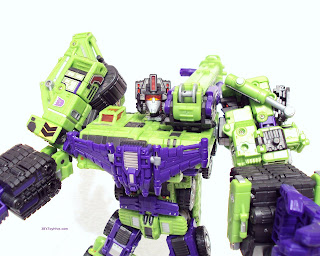 The visor attaches to the front sides of Hercules's head (or is it his helmet?) and has a translucent red lense so you don't lose the light-piping effect. I would have preferred it to be a bit thicker for two reasons: it would have been a bit more durable and you wouldn't see so much of the eyes defined through them, which can make the visor look odd, kind of like being able to see someone's eyes when they're wearing sunglasses. 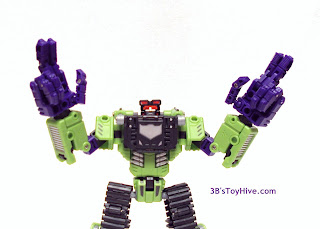 I'm not sure if this was intentional, but you can actually plug the gestalt hands into Neckbreker's fists and have him sport some giant hands, like the robot equivalent of those big foam fingers. It's more of a gag thing than anything else.

In all Neckbreaker has some sore spots going for him, but he's not all bad and is a nice update to Bonecrusher. Obviously, I'm into this guy for the big guy, but it's nice to have the option of displaying him along with the other figures as the Constructicons. Well, this means I only have Madblender left to review before I get to the main 'bot himself, Hercules! Will the Mixmaster homage deliver an explosive cocktail of awesome, or will he be drowning in his own brew? Find out, soon!

For my other TFC Hercules reviews, click below:
Heavy Labor (aka Long Haul)
Structor (aka Scraper)
Posted by 3B at 12:45 PM