As a child of the '80s I was able to enjoy a lot of great toy properties in my youth. It was the golden age of the action figure that paved the way for the technology seen in the '90s and '00s. While today's toys are engineered at far superior levels, there really aren't any new properties that manage to surpass the classics, which is probably why companies keep revisiting (and improving) older characters and licenses. Fans of Star Wars, G.I. Joe, Masters of the Universe, superheroes from both DC and Marvel, along with Transformers, have enjoyed updated toys of classic characters from those properties for most of the last decade, but 2012 proves that the trend of revitalizing old properties will continue. Case in point, no less than three '80s/early '90s properties are reappearing on store shevles (and online) with updated, classic versions of their characters: Teenage Mutant Ninja Turtles (by Play Mates), Voltron (by Mattel) and the ThunderCats!

The T-cats are coming to us thanks to Bandai on the strength of a new animated series, while those redesigned characters are cool, I'm only interested in the classic versions. The ThunderCats Classic line was first released last Summer in 8" scale (Lion-O and Tigra comprising the first and only wave) which turned a lot of collectors off, but was met with mostly positive reviews. However, Bandai heard the outcry from fans for a 6" scale and decided to relaunch the line in the smaller size. I never picked up the eight inch figures, but was all for them in the new scale.

Lion-O features a highly-detailed sculpt that doesn't have to rely on paint to create his costume. Unlike the 8" version, the six inch figure has a seriously pissed off face sculpt and I can dig it. There are plenty of defined muscle groups all over his body and Bandai even sculpted the upper leg muscle (sorry, I failed Anatomy 101) to extend over his hip section, the same with his pointy boots. There are a couple of things that bother me about the sculpt, though. First, his shoulders seem too big for him and inadvertently make his arms look a bit scrawny. Second, his hips extend just a bit too far out from his pelvis, which further throws off his proportions. These two problems combined make his torso seem too small, although it's really perfectly matched with his legs and arms.

A major sore spot amongst other reviewers are the six visible screws on his back holding his shoulders and torso together. While I can agree that it is ugly, it doesn't bother me as much as it seems to bother others because I mostly pose my figures facing forward. Lastly is an issue that was present on the 8" line and the modern 6" line (and I believe on the 4" figures, too), which is the mismatched peg color on his ankles. For some reason, Bandai didn't mold the piece connecting the lower leg to the feet in the same dark blue used for his boots. Annoyingly, they used the same color plastic as his orange skin. That seems really amateurish to me and consider it uglier than the screws on his back. 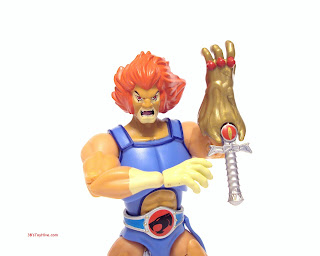 Lion-O includes a plenty of accessories: "dagger" of Omens, sword of Omens, claw shield with hip attachment, gripping hands and a pair of open hands (pictured in the turnaround shots above). The shortened version of the Sword of Omens (or dagger) can holster into the claw shield. It's a tight fit, but you can get it all the way in there [that's what she said - Ed.] and even works while he's "wearing" it. The claw shield doesn't actually fit over Lion-O's hand, instead it replaces his hand, plugging on to the ball joint on his wrist. As such it's able to rotate freely around his forearm.

Bandai included a removable hip attachment that plugs into a hole over Lion-O's left hip. The attachment features a ball end which fits into the shield just like Lion-O's wrist joint. I'm glad he includes this piece as it essentially allows him to store all his weapons (except, of course, the full-length sword) on his person, however the shield does jut out significantly when it's on his hip. This is much more apparent when the dagger is sheathed, making it a bit awkward for his left arm. You can pivot the hip attachment around a bit and more-or-less work his arm into a natural looking pose. 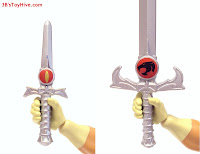 The claw shield is all fine and dandy (actually, I really like it's sculpt and the gold color is gorgeous!), but when it's time to kick some ass, Lion-O turns to his trusty sword of Omens! When not in battle the sword remains in it's dagger-state. Both versions are molded in blue, very soft plastic, then painted with thick silver paint. The only reason I know it's blue underneath is because there's a chip in my dagger. The soft plastic causes the full sword to bend no matter how many times I straighten it out. It's not an issue on the dagger due to it's shorter length. The dagger features the omnious "Eye of Thundera" just above the hilt, achieved via tampo in red and yellow paint. The Sword of Omens features a full guard with the ThunderCats symbol above the hilt. 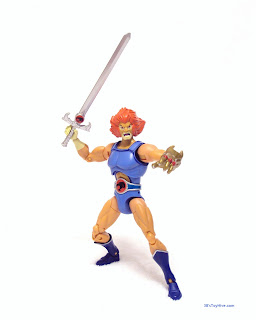 Something that really impresses me on this figure is the articulation. Lion-O has a ball-jointed neck (limited by his crazy red hair), waist and wrists, swivel/hinges at his shoulders and hips, swivel biceps, thighs, and boots (under-calf), and hinges at his elbows, knees (double) and ankles. He also features a chest pivot that allows for side-to-side motion and rocker ankles. Nearly all his points work perfectly and there weren't any stuck or overly tight joints on my figure. His ankles are a bit on the loose side, but not to the point of most of my WWE figures. 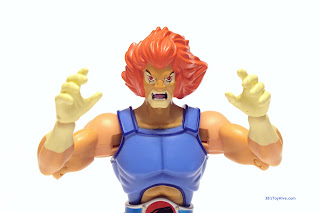 When Bandai announced last year that they would release toys based on the new series and a "Classic" line geared towards collectors, it was met with apprehension. The only real experience I've had with Bandai is through their Mighty Morphin' Power Rangers toys, most recently the modern 4" takes on the classic team. I wasn't too impressed, but I was never a huge T-Cats fan, just a casual one, so I figured what the hell. I think many fans (including the Four Horsemen) really wanted Mattel to take over this brand, but looking at the finished product and the recent blunders by Matty, I am RELIEVED that Bandai is producing these. I've read a lot of reviews on this figure and most seem to be negative, but I have to stand up and say these two are pretty f*cking great. Is Lion-O perfect? No. He does have some flaws, but nothing to the extreme of making me avoid the line altogether.

This is kind of looking beyond Lion-O and the ThunderCats in general, but let's analyze the situation here for a moment and just focus on this as a collectible "toy". He features all the accessories that are appropriate for him. He has excellent articulation (on par with Mattel's WWE figures and Hasbro's Marvel Legends, and probably better than either one). He features a completely unique sculpt from head to toe that will NOT be seen on any other figure in the line, lest Bandai release a redeco. And most appreciated, he's available at all the major retailers with Target and Walmart selling him for $14.99 (plus tax)! I wouldn't pay more than that for him, but at roughly sixteen bucks he's a great value!

Unfortunately there weren't any new TC Classic figures revealed at Toy Fair this month, so no word on when we can expect Panthro, Cheetara and 6" Tigra. I don't know what that means for the line, but all I can say is that we as collectors often bitch and moan about endless buck reuse, lack of accessories and missing articulation in a line (Yes, I'm looking at you DCUC). Bandai has delivered a fantastic figure here that eliminates all of those concerns and the other figure in the wave, Mumm-Ra, is cool too [review coming soon! - Ed.]. These are readily available and very decently priced. If you have even a casual interest in ThunderCats, I recommend you go out and buy these. At the very least give Lion-O a shot and I'm sure you will not be disappointed. Let's "vote with our dollars" and support this line and simultaneously show other big toy companies what can be achieved at a $15 pricepoint. 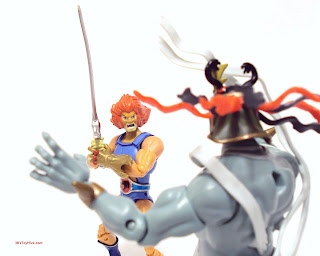