WWE Legends didn't get the retail support Mattel wanted so it was announced last year that the line would move to MattyCollector.com for 2012 and only feature six figures for the year, voted on by the fans in an online poll. However, the first figure, Andre the Giant, was already decided on by Mattel and was released this past January. Today we're taking a look at what is literally the biggest WWE figure Mattel has produced thus far. Is he worth the hassle of ordering from MattyCollector and dealing with the online support company, Digital River? Find out now!

Before I get to the figure I wanted to add in a quick word(s) on the packaging. The 2012 series features the same "bubble-on-card" Legends packaging we're used to, however, there is no mention of what "series" the figure is part of on the front of the card and most of the package/manufacturing information on the backside of the card has been removed, including preview images of the rest of the Legends in the wave. Instead, we still have a brief "bio" of Andre and the Matty logo on the bottom. I guess keeping the package the same is good news for all you "MOC" collectors out there. For me it really doesn't make a difference. I scan the backside of the card because I love the "painted" look of the portraits and for the benefit of the reviews (coincidentally, there are only two Legends reviews I've done that do not feature a scan of the card art. Can you name them?).

I won't go into too much history on Andre, instead I'll refer you to his Wikipedia entry here where you can get up to speed on the big man. Mattel originally planned to release the Giant as a pack-in bonus for the sadly unproduced WWE Legends "Elite-scale" wrestling ring. Unfortunately, the lackluster sales of their first Elite ring forced them to abandon the second attempt. Mattel announced that they would eventually work Andre into a single package release. Fast forward over a year later and we finally have him in the Legends line (and subsequently, our shelves). 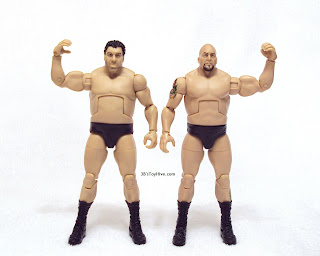 As you can imagine Andre's size poses a unique challenge for action figure manufacturers, this is especially true for Mattel who introduced "Superstar Scale" into their figure lines. However, he doesn't feature much more than a unique head sculpt. He's constructed by borrowing heavily from two already released figures (or is it the other way around?): Elite series 4 Big Show and Legends series 5 Bam Bam Bigelow, the former supplying the arms & legs, with the latter lending the entire torso from chest to crotch. Look closely, Andre doesn't have a belly-button! This combination works well for the Giant, although he's a bit slimmer, it still makes for a great action figure look. 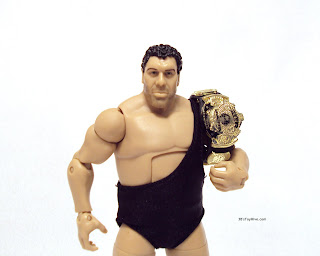 Andre the Giant includes two accessories, however, depending on how you look at it, he may not include any real accessories. The first is his single-strap singlet which is removable and similarly constructed to the aforementioned Big Show's ring attire. Some fans may not consider it a true "accessory" as it's part of Andre's "costume", but I'm glad it's removable instead of sculpted on because you can always take it off and, VOILA, alternate costume (it works for Jack Swagger).

His second accessory is the classic "Winged Eagle" version of the WWE title belt and is identical to the belt included with Bret Hart in the "Defining Moments" line. You can argue the belt isn't really "his", though. Sure, he held it just like Hart or any of the other champions, but you can't really say a title belt is anyone's unless it's a custom belt (i.e. Legends 6 Ultimate Warrior's yellow-straped belt). I switch the belts around on my figures all the time, so if a belt is the only accessory included in the package, the figure ends up looking pretty plain once you remove it. Luckily for Andre, his height as an accessory, too! He doesn't really need much to make him stand-out (literally!) in a display. 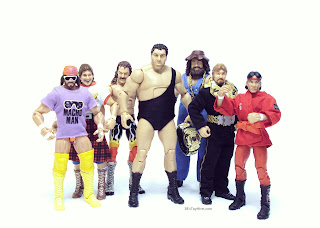 Like I mentioned earlier, Andre the Giant is available exclusively on Mattel's "Adult Collector" webstore, MattyCollector.com (powered by the imbecilic Digital River) and there are both pros and cons to that. The pros: you can find the figures you want without having to go through the hassle of hunting them down in stores and they'll be delivered to your home. The cons: the figures are sold at a mark-up and you have to add shipping & handling, plus tax in most cases. Also, if you have any Customer Service issues you have to deal with "Dimwit River" and their overseas representatives, who don't give three craps about your toys.

When Mattel unveiled their 2012 MC subscriptions I lamented the fact that they didn't create one for WWE Legends. Now after already running into an issue with my first Club Lion Force order, I'm so glad they didn't sub Legends. To be honest, you shouldn't have any trouble ordering any of the Legends off of Matty, I've ordered plenty of non-sub stuff on there for the past couple of years and really haven't had any major issues, but I don't understand why they couldn't have offered these via their regular webstore, Mattel Shop. Maybe it's an issue with international shipping, I don't know.

To no one's surprise, Matty Collector isn't selling out on any of their WWE products. I mean, three months after they were released, the Rockers are still available (and on Ringside Collectibles, too!). While that may not bode well for the future of the Legends line, it does offer us a great oppurtunity to wait for some more figures to become available and then order them at once to help with shipping costs. For some reason, Matty decided not to release new WWE figures with other non-WWE releases on the usual sale date of the 15th each month. I guess they don't think a WWE fan would be interested in Voltron, Masters of the Universe, Ghostbusters or DC Universe toys, too.

If you haven't picked up Andre, yet, or were waiting for a recommendation, well here it is. Buy him! I really like how he turned out and he's one of those Superstars that really helps complete the line. When talking about WWE Legends (the toyline) with my friends I always say it will never be complete until Hulk Hogan is in it, but Andre the Giant is one of those wrestlers that are just as important to the history of the WWE and vital to any wrestling collection. If you are waiting for more figures to become available the next Legends release, Diamond Dallas Page, is scheduled for April, but you may want to consider getting Andre before then. 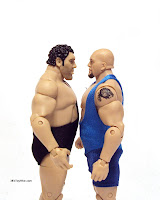 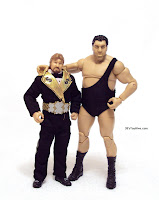 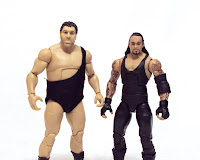