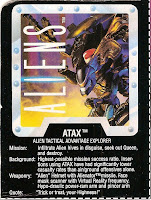 Earlier in the year I mentioned I would be turning 30 in 2012 (it happened last month, if you're wondering) and wanted to devote some time to a few of my favorite toys. I originally planned to cover at least one figure per month, but all of a sudden March snuck up on me and I haven't even featured one classic action figure, yet! Today I'm correcting that with a brief review of one of my top 10 favorite action figures of all-time (yes, really!), none other than ATAX from Kenner's awesome Aliens line.

With all the modern advancements in action figure manufacturing I find it surprising that there isn't much diversity on the shelves these days. Although the Aliens line was a licensed property, it took liberties with established characters while introducing new characters and vehicles, something you don't really see today.

ATAX, or "Alien Tactical Advantage Explorer", is a Space Marine that can infiltrate an Alien's hive using his xenomorph disguise and released around 1993. I don't know if the character ever existed in the Dark Horse comics series, which were popular at the time, but he sure did get lots of love when it came to his design. He features a truly unique sculpt and beautiful paint apllications to enhance his highly-detailed costume.

I always imagined ATAX was of Scottish decent, probably an association I made because of his fiery hair color and having the baddest set of sideburns this side of the Marvel 616 universe. Like many toys of the era, ATAX featured only five points of articulation, all swivels, at the neck, shoulders and hips. That may seem crude by today's standards, but they got the job done. 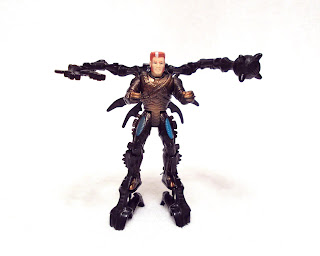 ATAX's main selling point was his ability to disguise himself as one of the titular Aliens in the franchise. To accomplish this, he included four pieces that attach to his suit: a pair of leg extensions, a backpack with alien arms and a helmet which featured a spring-loaded projectile. The leg extensions snap over his feet from the outside and increase his height from four and a half inches to just over 5.5", making him a formidable opponent for most of the Aliens in the line. 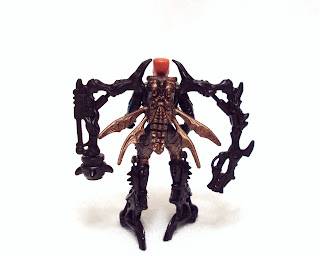 The backpack simply slides over a tab on his back and has open tubing that lines up with the sculpted tubing on his shoulders. Just like ATAX's body, the pack is molded in black, but only features the coppery paint apps on the rear side. It has a sculpted "tail bone" and small rubber wings are glued on to the sides.

The arms on the backpack are connected via ball-joints allowing for a lot of movement. Each arm has a different armament: the right arm features a pincer claw that can be manually open and closed, the left arm has a battering-ram type attachment that can rotate 360 degrees. Both arms do well to capture the bio-mechanical look of the Aliens as they were designed by H.R. Giger. 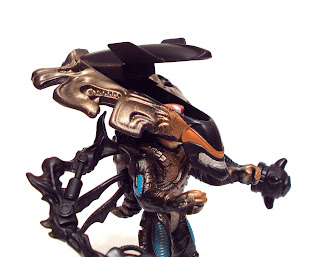 The helmet is designed to simply fit over ATAX's head and held on by friction. It's shape implies that the costume is meant to mimic an alien queen rather than just a random warrior alien. The "face" on the helmet looks very similar to a snarling alien, however, the details are much more technical looking with smoother design lines. Pushing down on the back of the helmet will raise the entire middle section, revealing the inside of the helmet and simultaneously firing the front end with is the hidden projectile. A quick peek inside reveals a scope that lines up with ATAX's left eye. 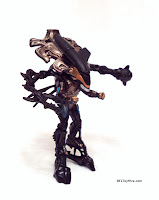 This is actually the second ATAX I own, purchased only a few short years ago off of eBay, when I was suffering from intense toy nostalgia and tried to find as many of my old toys as possible. My original figure, which I obtained in the early '90s, was lost, most likely a victim of Mom's annual, pre-holiday toy purges. Back then ATAX squared off with my Queen alien, Gorilla alien and the warrior alien from the two-pack that also included a Predator. I never had any of the other Space Marine figures, however I do have Lt. Ripley now along with her Power Loader. If you were never a fan of that line, I can't say ATAX would change your mind now, but if you had some of those figures and enjoyed them, then I highly recommend you find yourself an ATAX. I don't remember how much he cost me exactly, but it was somewhere between ten and fifteen dollars, shipped. And he was MOC, which is always cool because it gaurantees he was never covered in some kids snot. 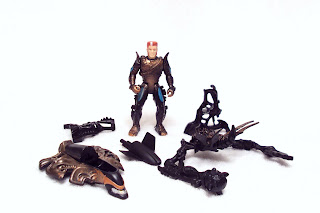 I hope you've enjoyed this little trip down memory lane, I'm looking forward to diving into my storage bins and sharing some more figures from my childhood. Stay tuned!
Posted by 3B at 1:05 PM