A new month is here, but as I mentioned in last month's COD edition, WWE Legends are still taking up most of the real estate on the main displays. However, there are a couple of new additions in there and I did a bit of rearranging so all the figures get a chance to shine. And to balance all the hulking human physiques on display I added a bunch of robot goodness! Plus with all the new Transformers: Prime figures I picked up last month, I had to throw them in there some way because I'm quickly running out of storage space. Click ahead to see what on the shelves in March and a few sneak peaks at some toys that will be reviewed throughout the month. 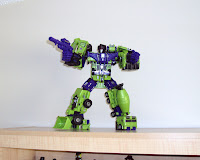 Holding down the very top of the bookcase is pretty much the pride and joy of my collection, TFC Toys' Hercules, an homage to the classic G1 combiner, Devastator. If you're unfamiliar with this toy then you obviously haven't been following the Hive over the past six months. Don't worry! You can catch up on all the reviews by clicking here where I've listed reviews for each of the six robots in the team, plus the review of the combined figure, Hercules. I just recently added the second Repro Labels upgrade kit to Long Haul and will be ordering the third, for Structor, very soon. It won't be long before ol' Herc is fully decked out in Decepticon symbols and G1-style details.

On the third shelf in front of the graphic novels are two Transformers figures from different series. To the left is "Powerizer" Optimus Prime from the Prime - Robots In Disguise line, which equates to a slightly smaller Voyager-sized figure with a lame light-up weapon gimmick. Some quick thoughts on this line: It's not as bad as a lot of people online make it out to be. I won't argue that the First Edition version looks much better, mostly due to the better paint apps, but this one is actually fun to transform and looks pretty cool. I don't feel the translucent "Powerizer" parts are as effective on Prime as his casemate, Megatron (more on him below), and will eventually paint his forearms red along with some of his chest parts. 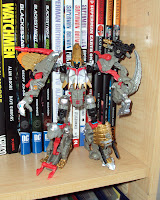 To the right is Grimstone from the now-defunct Power Core Combiners series. I managed to pick him up during Walmarts holiday sale when he was matched up with one of the two-pack commander and mini-con sets for a whopping $10! At ten bucks, this figure is cool. It's not the greatest gimmick, but he kind of fills the Dinobots space in the "classics" collection for now.

I originally posed him next to the Hercules, but it seemed... abusive. When combined with his dino-drones, Grimstone is roughly the height of a Voyager figure, so he's in no way a threat to the Constructicon gestalt.

And finally some new display space is available since I now have my own "office" for my computer and toys thanks to the my DVD cases which used to be in my living room. Above we have Lion-O defending my "Amp in a Can" from the evil that is Mumm-Ra! Both figures come from the ThunderCats Classic line by Bandai.

On the other DVD case is my fledgling collection of TF: Prime Decepticons: Starscream from the First Edition series, Soundwave and Megatron from Prime-RID. There's a reason this Starscream ranked high on many "Best of" lists last year, he captures the on-screen look perfectly and features a neat transformation. Likewise, Soundwave is an awesome toy and lots of fun to play with. He even includes Laserbeak!

But the 'Con that takes the taco is "Powerizer" Megatron. He's a perfect candidate for using the clear plastic pieces found in this series. He features a great sculpt and is appropriately bulky. I'm not crazy about how he looks in his "space jet" mode and the transformation can be frustrating, but overall he's a great representation of the character. This figure is solely responsible for making me change my mind on the entire "Prime - Robots in Disguise" series.

Along with Soundwave I also purchased Wheeljack and Cliffjumper, and just yesterday I found Ratchet. I'm holding out for the new Arcee and Bulkhead before I put up a Prime Autobots display, but it doesn't seem like I'll have to wait very long for that.

Until next time, keep your displays dust-free!
Posted by 3B at 11:30 AM