Hey there everyone.  This is Novelty from Toy A Day, interrupting you from the regular rassling figure reviews for a Transformers review.  OK, OK, 3B has been posting about his Hercules recently and I have gotta say I'm mighty jealous.  But money doesn't grow on trees, so I have to settle with el-cheapo Legends-class Reveal the Shield transformers when they go on sale. 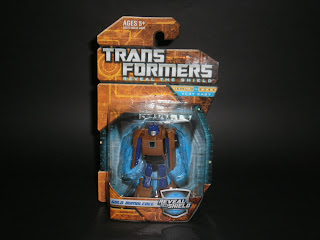 I walked past the Transformers aisle and I saw a whole rack full of these guys.  And they were marked down for sale.  Yeah, gold isn't the colour for Bumblebees!  Oh and just FYI, I've also reviewed two other Bumblebees here on the Hive: Activators and United.  Traditionally, I do insect-themed stuff here anyways... or 3-pack stuff, and I don't want to break from tradition! Bumblebee is a neat little figure, although I'm not too sure about that head.  It looks a bit more like Cliffjumper than Bumblebee.  He's made of an orangey-brown plastic which looks nothing like gold.  They could have vacmetalled him metallic gold and he'd be more popular.  I guess this is the closest shade they could get to Goldbug.  There isn't much kibble, but the transformation to car does hurt his arms where articulation is concerned. He has 3 points of articulation per limb (4 if you include the wheel), but only one point on the shoulder.  They could have at least given him an elbow joint.  The colour-changing thermosomething sticker works well, but it seems a bit small... 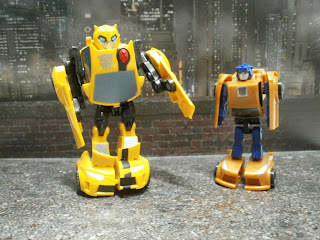 Here he is next to Activators Bumblebee from the Animated line.  Yes, Gold Bumblebee is small and he stands barely 2-inches tall. 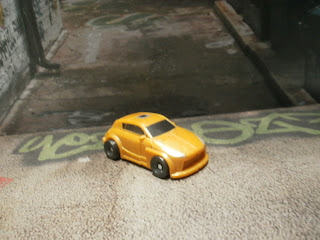 The transformation to car isn't too difficult, but that first step was a huge jump - the instructions just wasn't very clear.  The car mode seems a bit off.  Sure, it looks good and the joint lines are kept at a minimum, but there is a line for the door which isn't a joint (since there are no elbow joints). This bumblebee is even smaller than a Matchbox car and is dwarfed by the United Bumblebee.  But being small means it takes up less space, so that's one good thing about it at least.  After RtS Legend-class Megs and Starscream, Gold Bumblebee is a letdown though.  No wonder he peg-warmed here.  Ah well, at least he's cheap!
Posted by Novelty at 11:05 AM