It's a pretty great time to be a Transformers fan right now; there's two new animated shows on TV, toylines to accompany the shows and the promise of a great videogame and more toys coming later this year. I wasn't immediately enamoured with Transformers: Prime when it was first released (or rather when I first watched it), but eventually I caught a few of the better episodes and once the toyline was revealed I was pretty psyched to get my hands on them. Of course, there was a whole debacle regarding the "First Edition" series and the current main-line, "Robots in Disguise". After picking up the NYCC set, Starscream and Arcee, I really had my heart set on adding the FE versions of Optimus Prime, Cliffjumper and Bulkhead. Unfortunately, those never materialized in adequate quantities in the US, leaving many fans high and dry. Comparatively, the RID versions of those characters aren't as great, but one figure in the new line proved good enough to make me change my mind on the rest of the series. Let's see what he has to offer...

Although not noted anywhere on the packaging, this figure is a "Powerizer" which equates to a Voyager-sized toy (which IS noted on the box) with a light-up MechTech weapon. I'll tell you right now, I don't give a crap about the light-up gimmick, specially one as poorly executed as this one. That said, my favorite part of this Megatron is his robot mode which turned out to be a great representation of the on-screen character.

Most of the beefier TF: Prime robots are either already available or scheduled in the "Powerizer" series, however Megatron is the one that benefits the most from the treatment. The translucent purple pieces beneath his torso and forearm armor go a long way in mimicking his energized look from the show. As is to be expected from modern Transformers, he paint apps are very minimal, but he does feature a couple. There's silver paint for his face and purple paint for some of the non-translucent sections. 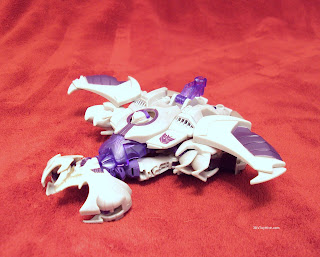 As per the fantastic white box Megatron is packaged in his alternate mode is a "spaceship" although it's obviously not meant to conceal itself as anything Earth-based. This is Megatron's weaker mode, but I can't completely blame the toy. On the show his alt-mode is very "WTF?"-ish, even for a Cybertronic vehicle, very similar to his alt-mode in the first live-action Transformers film. The toy suffers in that it has several large gaping holes in it, mainly when viewed from the front or the bottom. The actual process of converting him from robot to "flying thing" can be really frustrating and counter-intuitive and that's largely attributed to his weird vehicle mode. Unlike a truck grill on Optimus Prime or jet wings on Starscream, Transformers that chose Earth-modes for "disguise", there's really nothing about Megatron that you can easily point to and say, "Ah, yes, here's his jet engine and this is his cockpit..." etc. 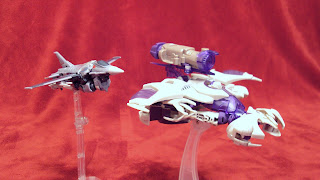 Another advantage Megatron has over the other Powerizer figures is that his in-show weapon of choice is a BFG, so it's easily accomodated in the line. Hif fusion cannon features a gimmick where pushing the plunger at the back causes two clear purple blades to swing forward and form a sword just below the cannon. This also makes the weapon light-up. Unfortunately there's no way to lock the blade in position so once you release the plunger the blade disappers. I could do without the gimmick and the fact they designed so that the battery cover ends up on top of the cannon makes it look upside-down on his arm. 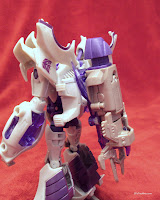 Megatron also includes a "battle claw" weapon that can plug into the port just behind his hands and adds spiked knuckles and several blades to either arm. The claw can also be plugged into his fusion cannon for truly wicked look and for "storage."

The entire combined weapon can be displayed on Megatron's forearm (either one), plugged into his back while in robot mode or connected to the top of his spaceship mode. 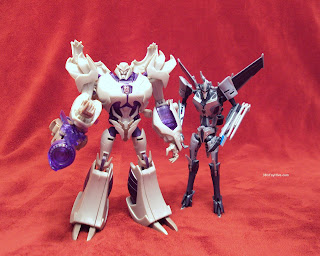 The overall design (minus the human characters) have caused Transformers: Prime to grow on me. I think the robots have a cool blend of G1 and movieverse design and Megatron's is one of the better ones. His alt-mode leaves a lot to be desired, but I know he won't spend too much time in that mode, anyway. The new TF: Prime "Robots in Disguise" series is currently available at all the major retailers in my area and I've been able to find all the released figures already except Arcee. Toys R Us is probably the worst retailer to buy these from because they're priced at $26.99 for the Voyagers. It was an easy pass for me when I saw freshly shelved Optimus Primes at my local TRU early last month, but less than a week later I found Optimus and Megatron at my local Walmart where they're selling for a much more palatable $19.96 each, plus tax. I may be wrong, but these seem bigger than the "Dark of the Moon" Voyagers and feature nicer designs (to me, anyway). I really enjoy Megatron and Optimus, which turned out nice, albeit with a couple of shortcomings in the paint department.

If you're interested in these, but aren't ready to commit $40+ to get both figures in the first wave of Voyagers, I recommend you grab Megs here first. He's shortpacked in the case with OP, 1:3. While I've seen as many as 8 Voyager Primes on the shelf at one time, I've only seen a shelf with more than one Megatron once and even then there were only two of them. 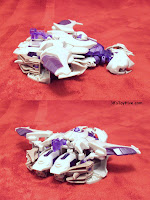 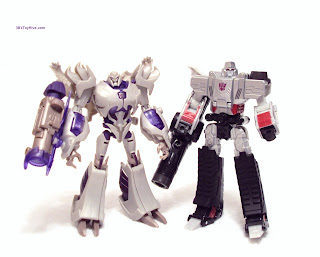