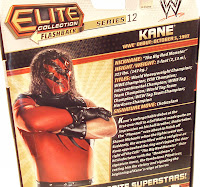 Kane has had a resurgence in popularity in recent months, returning to his masked monster persona as opposed to the "scarred" freak show gimmick he's used for nearly a decade. It's still a bit early for Mattel to release an updated version of the big red monster (which should certainly include his "predator" mask!), but he did just receive a new figure in the twelfth wave of the Elite Collection. And if masked Kane is right up your alley, then you'll be happy that Mattel chose to make this a "Flashback" figure based on his debut attire!

This is Kane's fourth Elite figure after his series 4, series 10 and RSC exclusive releases and he once again receives some newly tooled parts specific only to him. The Flashback figure features a newly sculpted head (with a non-removable mask) and upper & middle torso.

The head captures Kane's debut mask perfectly while the hair is a separte piece glued on to the head allowing it drape around his mask. But if you pull his hair back you can clearly see his ears. There's even a bit of goatte sculpted under his chin.

The new torso really goes a long way in creating this figure. Instead of taking the cheap way out and just using paint to create his costume, Mattel went and sculpted a whole new torso that includes the left edge sculpted down Kane's side. The upper torso piece also features a sculpted collar. To cap him off they created new wrist cuffs: a short one meant to be part of his gloved right hand and a larger cuff for his left forearm. Both of these are separate pieces that can rotate over the arms, but don't worry about them slipping off, unless you heat them up first. Below the waist, E12 Kane is the same as his E4 release in regards to the sculpt.

The paint on the mask is done very well with the black stripes being appplied cleanly. Mattel made sure to color each eye differently as Kane wears a white lens on his right eye for added creepiness.

The torso features mostly good paint applications, it's been molded in red plastic and uses black, silver and a paint color matching Kane's exposed left arm to complete the costume. One of the black spikes on my figure's back is smudged and there are some random silver marks there, too. It doesn't bother me too much considering these errors are on his back, but it's a bit of sloppy quality control.

Oddly, Mattel chose to completely paint the right arm instead of just casting it in red. While they did a great job of matching the paint to the molded parts, there are a couple of problems with this. First, the inner shoulder joint is still flesh colored and that can be unsightly depending on how he's posed. Second, the thickness of the paint causes an unhealthy rubbing sound when you manipulate the right elbow. I've also noticed a couple of very small chips in the paint on his bicep already.

Luckily, no such problems exist on his lower body where the amount of painted details could easily have led to lots of QC problems. His belt has been simply painted on with black paint, but the silver studs are all applied cleanly and that continues on the criss-crossing pattern down his left leg. 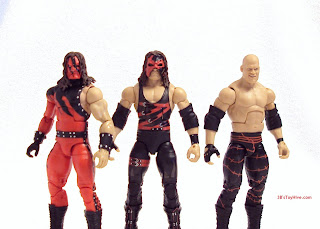 Inspite of having a new torso, E12 Kane is still the correct height compared to his other iterations, although this figure makes the exclusive one look anorexic by comparison. There's nothing new articulationwise, he has all the same movement points as the other two figures pictured above (and the rest of the line, for that matter). His neck joint is a bit obstructed when it comes to looking up, but side to side and down movements are fine. His right arm is the only appendage that suffers from overly-tight joints, but that's due to the aforementioned paint issue. 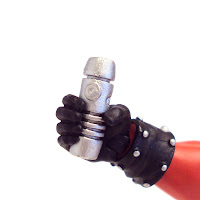 Debut Kane includes one accessory and I wouldn't have missed it if Mattel had decided to not include it in the box: it's his voicebox which he used to "talk" when he first spoke. I thought it was stupid back then and it's still stupid today. Had he never talked throughout the rest of career, then it would have been fine. But the fact he eventually started talking without the voicebox made the fact he ever used one all the more ridiculous. The toy version is just a small molded piece that's been painted silver and resembles a flashlight due to being upscaled to fit in Kane's reused hands.

I would certainly call this a fan-demanded version of Kane that could have easily worked as part of the Legends line, although the design team has stated they would not include any active Superstars in that series. I'm almost shocked Mattel invested in a new, very specific, torso that could only be used once. But then I remembered that Kane wore an alternate version of this costume with the colors reversed. Will we ever see that version of Kane's debut attire? I'd say it's a sure bet Mattel will get to it eventually one way or another. 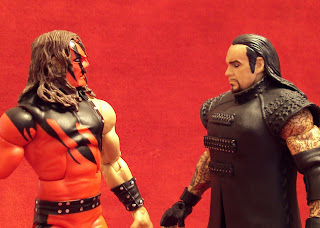 I scooped up Kane back in January at my local Target and haven't seen him again anywhere. I don't know if he's short-packed or really popular with kids and collectors. I can tell you that at one Target in my area the Elite pegs are over-stuffed with Kane's fellow wave 12-er, Randy Orton. That guy is pegwarming hard! As for Kane, I definitely recommend him to fans of the Big Red Monster and/or Legends collectors as this version is probably his most iconic.
Posted by 3B at 11:45 AM