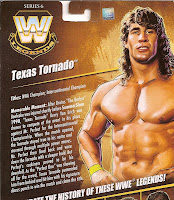 The real-life world of professional wrestling is filled with tragic stories of beloved athletes with lives cut much too short due to illness and circumstance. Iconic heroes who have struggled with drug addiction and other demons and consequently families that have suffered immeasureable losses. That seems to be truer for one pro-wrestling family in particular, the legendary Von Erich family.

However, it's important to remember the contributions they made to wrestling and the joy they brought to fans around the world. Today we're looking at the "Texas Tornado" version of Kerry Von Erich from WWE Legends series 6. He along with with his older brother Kevin make up 3/5ths of the wave (there's a non-Tornado version of Kerry also) and offer up what is surely the best representation of Von Erich action figures released at one time. 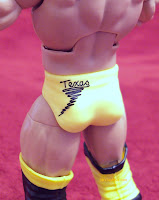 The Texas Tornado is built around the large, super-toned body seen on figures like Batista in the Elite Collection and fellow WWE Legend, the Ultimate Warrior and shares the same benefits and drawbacks of that sculpt. Since I've covered that sculpt on various occasions, I'll focus on what's new with Tornado, most obvious is his head. I think it's another one of those headsculpts that is just a bit "off". Not helping matters any is his hair which is a separate rubber piece that was glued on to his head. On the front it doesn't cover his forehead enough (see cardart above) and makes it look like he's wearing a wig.

The body works well for Texas Tornado (and subsequently his wave "variant" which still suffers from that unfortunate head), but Mattel added a new piece necessary for any action figure based on a wrestler from the legendary Von Erich family: a right hand molded in the infamous "Iron Claw" gesture. This is the first time any Superstar receives a character-specific hand sculpt, something that would have benefitted Jimmy Snuka tremendously. 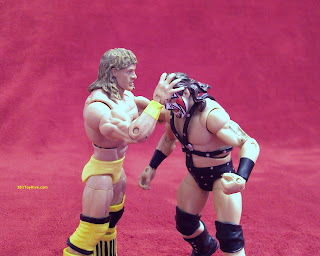 The hand looks great and as you can see works perfectly for grabbing another figure's head. The only problem is Tornado can't follow-up with his "Discus Punch" afterwards, but I much rather have the open hand on him. To complete his attire Mattel added the large kneepads, this time molded in yellow, probably because they were easier to paint than the smaller versions, and the tassle-riffic boot covers previously seen on British Bulldog.

The paintwork on Texas Tornado is simplistic, but done effectively and I didn't encounter any issues on my figure. Aside from the opposing black and yellow applications on his kneepads and boot tassels there are also paint apps in yellow (for his wrist tape) and a black tampo of his logo on his butt. 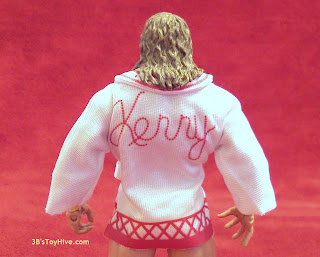 Texas Tornado is one of three figures in the wave to receive cloth accessories, which is probably why the other two figures (Eddie Guerrero and WrestleMania VI Ultimate Warrior) ended up with only dull, non-vac-metal title belts. 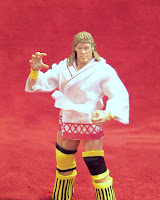 Tornado is packaged with an entrance jacket that unlike this particular ring attire, I was able to find him wearing in this video.

The jacket is made of a white silky material and features red printing for the details alont the bottom, trim and "Kerry" written on his back. The belt straps are sewn into the sides of the jacket, so you don't have to worry about losing the belt when you remove the jacket. In all it's a nice piece that moves wonderfully compared to other cloth accessories at this scale. 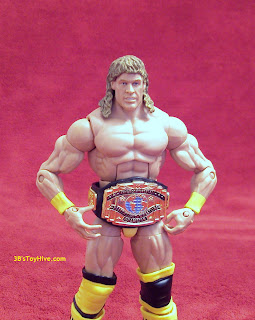 Mattel's first (and possibly only) Texas Tornado tries to get most of the details right by using broad strokes and for the most part he looks "alright". The worst part of the figure is the bad hair piece, which doesn't quite recreate Kerry's look. While I couldn't find a picture or video of TT wearing this specific ring attire, there were a few that were close including his appearance here, however, he's wearing white boots and you can see that the tassels on his boots are much thinner than presented on the toy. I understand that can be difficult to emulate on a seven inch action figure, but worth mentioning for accuracy's sake.

Would I recommend Texas Tornado? Well, if you've been collecting the line, you more or less know what to expect. He's nowhere near the best in the series, but if you have some of the weaker offerings taking up space on your shelf already, then surely you can afford to add him in, too. I wasn't sure what to expect when Mattel "announced" the Von Erichs & Tornado were part of wave 6, but I can tell you that all the Toys R Us stores in my area have plenty of them in-stock. I've held off on buying Kevin and Kerry proper until TRU offers a BOGO sale of some kind because I really only know them by reputation. Texas Tornado on the other hand is pretty vivid in my memories from watching the WWF in the early '90s, so it was nice to be able to add him to the collection, even if he's just a few notches below perfect.

UPDATE 3/15/12
Thanks to bharrisfan's photo link (below, in comments) I was able to search YouTube and find footage of Texas Tornado wearing the entire costume this figure is based on.