Depending on how you look at it, I either picked the perfect time (last Summer) to jump into collecting Transformers "Classics", or arrived to the party to late. I'll admit it's been quite the expensive journey trying to catch-up with all my "must-have" figures, while keeping up with new releases. To make matters worse, there have been a lot of excellent unlicensed (i.e. pricey), third party releases I simply had to have. While I've been able to buy official versions of most of my favorite characters, some requisite robots have been harder to come by.

At the top of that list is Soundwave, Megatron's right-hand bot. I found the Generations "Cybertronian" Soundwave rather easily at a Walmart not too far from home, and he's a fun figure, but I wanted a more traditional (and bigger) version for the classics display. The only real "classic" Soundwave released so far was the Takara Music Label figure, but he's no longer sold through retailers and the after-market asking price was above what I'm willing to pay for it. Then a glimmer of hope... BTS Toys released their take on a modernized Soundwave figure and he would cost less than $100! 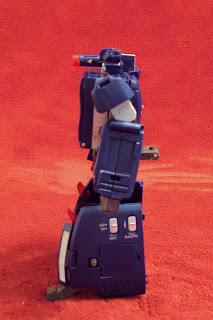 Alas, all is not well in the land of shape-shifting autonomous robotic lifeforms. Sonicron, the fourth release by third party company, BTS Toys, is a real lemon of a toy, one that feels like a cheap knock-off of an official release, although it's an original design... well, not exactly. BTS' "Soundwave" is based off of this design by "All Hail Megatron" artist, Guido Guidi. In this unused incarnation, Soundwave's modern alt-mode is that of a hand-held microcassette recorder.

It's a pretty cool take on Soundwave and it made sense for BTS to bring this design to three-dimentional life, but the final product was poorly executed and plagued by quality control problems. BTS felt it was important to make Sonicron compatible with existing G1 mini-cassette figures (and the Ravage figure included with Classics Hound), along with their own later mini-cassette releases. To that end, the size needed for his chest compartment was set. However, to keep him in-scale with official classic releases, they had to scale him down a bit and that led to him looking disproportionate. 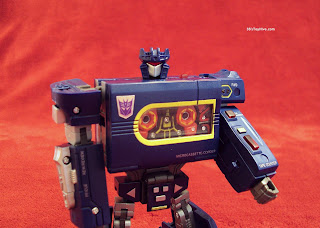 That's not exactly uncommon for action figures, especially Transformers, but it can be very distracting and he doesnt resemble his box art very well. You can look over the pictures to see the things that are wrong with his sculpt, I'll tell you about the things you can't see. First and foremost is the lack of a locking mechanism at his waist. If you pick Sonicron up, his lower body quickly slides out from the upper torso and dangles around loosely. Which brings me to point number two: loose joints!

Neck, shoulders, waist and legs - all loose. Sure you can get them into just the right pose, but it takes some work (more than usual, anyway) and some simple poses are altogether impossible to achieve. The quality of the plastic is another issue, it's very cheap-feeling, which I wasn't entirely surprised by after owning a few other BTS products, but Sonicron is by far the release with the worst quality plastic in the catalogue. 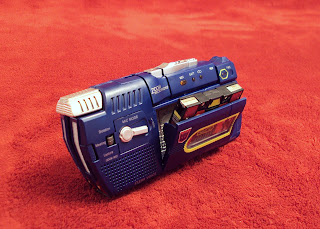 While you can always squint your eyes and have Sonicron look a lot like Soundwave in robot mode, his micro-cassette recorder mode does well to look like a real-world device with your eyes wide open. Most of the buttons are strictly decorative, but the overall shape and size of the device is very "life-like." Unfortunately, the cassette door on my figure doesn't stay shut while he's in this mode. The way the left arm closes up against the top of the chest causes it depress the ejection button. This may just be an isolated incident, but I've tried to fix the problem myself and have yet to find a solution, although at this point I don't really care because I am certain I will never display him in this mode.

The design isn't all bad. BTS was able to integrate Soundwave's handheld blaster and trademark shoulder cannon into the alt mode by allowing both pieces to join together and slide into the top portion of the device, forming it's "microphone'. In fact, all of Sonicron's accessories can be integrated into his alt mode save the alternate head. The actual transformation would be relatively easy except his poor build quality keeps things from lining up properly and staying in place.

His head flips back into a compartment in the torso, his right arms contracts and moves over his chest. His left arm similarly closes up, but remains flush against the left side of the torso. The backpack/rocket cluster attaches to the left arm. The legs are the most frustrating part. The feet and upper legs fold into the giant panels on his lower legs, then swing over via an absurdly designed series of joints to form the rightside assembly. There is a third "submarine" mode, but it looks so shitty and half-assed that I refuse to post an image of it.

As far as accessories go, Sonicron is heavily armed with the aforementioned blaster & shoulder cannon, plus a rocket cluster pack (with retractable rockets) that can be handheld or shoulder mounted and an alternate head, allowing you to switch between a sleeker, modern styling and a more traditional G1 'Wave look. There are also speakers hidden in his lower legs that can be removed and attached to his shoulders for those instances when the Decepticons need a soundtrack while they terrorize the Autobots. Said speakers are integral to the idiotic sub mode... Yeah, really. 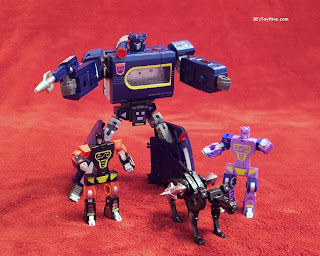 After shipping, I ended up paying just under $40 for Sonicron! Roughly half what he would have cost when he was first released, but even at that price I feel he was a ripoff. He's just poorly designed and manufactured. If I had only paid $10, I might have been okay with him, but realistically the only way I wouldn't have any complaints is if he was given to me as a gift. I haven't read (or watched) any overwhelmingly positive reviews on Sonicron, but at the same time, I haven't seen many outright negative reviews. I think this is the first time I come down hard on a toy, but Sonicron definitely deserves it.

In the hands of a master customizer Sonicron's robot mode could be something really impressive, especially if you don't care about his alt mode (which I wouldn't miss all that much), however that is beyond my current customizing skill level. Standing next to his fellow BTS creations, the Minions (which turned out great), and even United Megatron, BTS-04 doesn't necessarily look as bad as he actually is, which is why he will have a spot in my upcoming Decepticons display, but on his own he's just a truly unfortunate action figure. If you're thinking of getting him, if your even mildly curious and believe "he can't be that bad...", do yourself a favor and hand over your credit card to your significant other or parental unit. This one is a PASS. Trust me. 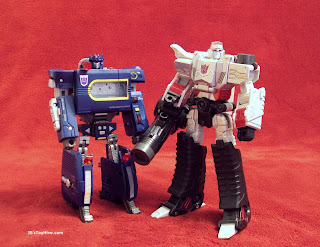