By now it's no secret that I enjoy and appreciate a lot of unlicensed, "third party" action figures and accessories and while there is a lot of shadier going-ons, you can't find too much fault in the more accessory-driven companies like Spy Monkey and Dr. Wu. In fact, the former has been so successful that they've expanded their operation beyond it's initial format of "home-based", small-scale manufacturing, to full blown factory production. The latter organization, Dr. Wu, has been crafting lots of smaller items that wouldn't immediately standout as being "lucrative" products, yet fill a void nonetheless. Let's take a look at the first weapon-based release created for Transformers Universe Hound and Ravage. 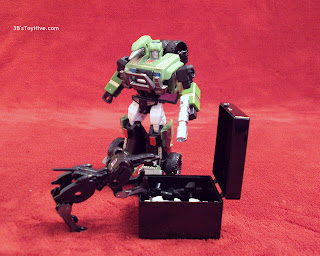 The set, which consists of one blaster for Hound and two missiles for Ravage, is packaged in a small, black plastic box that opens from the top. The image displayed in the introduction is actually printed on the top of the box. It's a nice little container, but it seems like overkill for only three pieces that just slide around inside. I guess you could always repurpose it to hold other small trinkets. Upon opening the box you find the three weapons wrapped inside a small clear baggie. Nothing fancy about that, but at least you won't have to worry about the weapons getting scratched up. 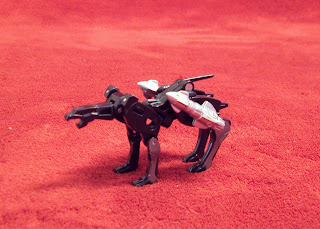 The missiles are designed with a peg that plugs into the holes on Ravage's hind legs. The won't fit into the front holes as those are smaller. They end up looking just a bit too chunky, but then again, we're talking about rockets on a robotic jaguar, so they'll do. The sculpt is nicely detailed with little wings flaring out from the nose, larger ones near the base and plenty of grooves and notches to give them a realistic look. I didn't expect these to be painted, though. With such small accessories, I figured they'd just mold them silver, or even grey and that would be the end of it. I'm not sure what color the molded plastic is underneath because the silver paint used on the pieces cover them completely. 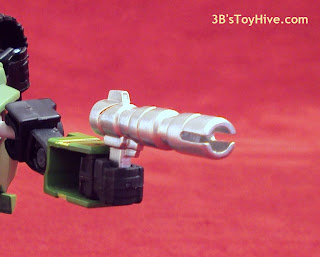 Thanks to Dr. Wu, Hound receives his classic G1 weapon (this one, not this one, which doubled as a rear-mounted cannon when in vehicle mode) and now has something to use against his pack-in enemy other than a holographic projector. It's constructed in the same fashion as Ravage's missiles, but since it's faithful to the cartoon weapon's appearance, is must simpler in design. Interestingly Dr. Wu made the blaster's handle rectangler instead of cylindrical, yet it fits perfectly in either of Hound's fists. The most intricate detail on the weapon is it's barrel, which is hollow at the end and has a slot cutting into it horizontally. They could have just glazed over this detail, but I'm glad the crafted it correctly to the source material.

Unfortunately there really isn't a spot to store the weapon in when Hound transforms into his jeep mode. I can't really blame Dr. Wu for that, but it would have been nice if they figured someting out that would allow you to conceal the gun in the vehicle. 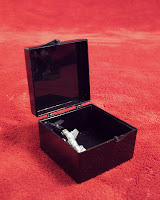 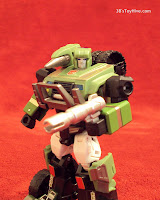 In all this is a nice little set if you want to enhance your classics Hound & Ravage figures. It's not terribly expensive, but I'm not sure how readily available it is at this point having picked mine up back in January. There is another set coming (from a different manufacturer) that features Hound's other G1 weapon, plus gas cans that snap on to his vehicle mode. After owning this set I can't say the other one is on my "want list", but if I find a good deal on it, I'll probably give it a shot. For now, though, I'm good with Dr. Wu's accessory pack.