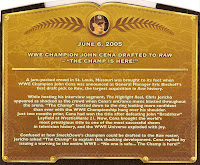 Okay, so I've been kind of busy working on my classics Cliffjumper custom and haven't had time to photograph a lot of the newer toys I've picked up in past couple of months, let alone write up posts about the older stuff. I'm jumping back in with a review that is LONG overdue, but I feel is important to get posted because it's one of the last figures from the seminal WWE Defining Moments line by Mattel. Let's see if this version of John Cena achieves the awesomeness displayed by his wavemate, the Hitman. 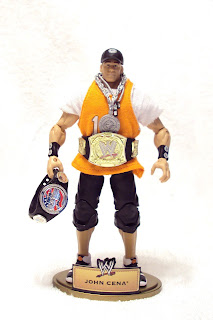 As is tradition for these "deluxe" WWE figures, I'll start off with the accessories. This Cena comes to us from a time when he played up his "rapper/thug" persona and so includes a white cloth t-shirt, basketball jersey, "chain gang" necklace & ballcap, dog tags and his custom "spinner" versions of the U.S. & WWE titles. He also includes the Defining Moments-standard cardboard name tag and gold WWE display stand.

The cloth elements of his costume are well-made. The t-shirt works like the others we've seen in the various WWE collector lines from Mattel, using a velcro closure on the back. I was surprised to learn that the t-shirt and basketball jersey are separate pieces. The jersey fits over the figure's head and can be a pain to remove and put back on. I'm glad they're two different pieces, though, because it opens up your display options. 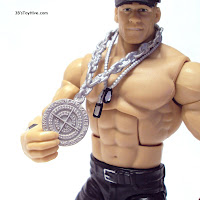 Cena's ballcap and dog tags share the same sculpt as his previous Elite figures. The dog tags are molded in grey plastic, then painted silver and luckily none of it stained the figure or his clothing. The black paint used to give the tags there rubber linings is a bit sloppy, though.

DM Cena also includes a necklace that would make the Junkyard Dog jealous. It's molded in a solid color without any paint apps, however the sculpting on the medallion is deep enough to produce enough shadows allowing you to appreciate all the details. It does not, however, spin like Cena's real-life medallion. My main problem is that the necklace is kind of stiff and doesn't permit the medallion to hang properly. Instead it tends to jut out and off of the figure's chest. I cheated a bit in a couple of my pictures by tucking the medallion behind the championship belt. 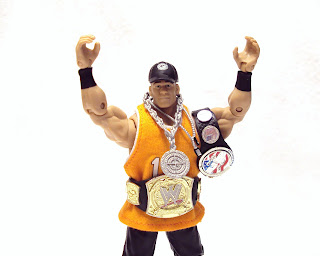 The meat-and-potatoes of this figure are his dual spinner championship belts. Well, really only one of them spins. The WWE title is the same belt we've seen previously, debuting in the Elite line with Sheamus and just like the current version of the WWE Title, does not have a spinning WWE logo. The version of the United States Championship included here is brand-new and does feature the spinning gimmick. The strap is a molded black rubber and tapers a bit at the ends, similar to what the classic "Winged Eagle" WWE Title looked like (the actual belt, not the toy version included with Bret Hart). The main section of the strap also features stars sculpted right on to it! 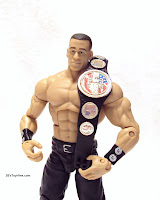 While you can rotate the center medallion around, it doesn't spin as freely as Cena's real-life title. I consider that a good thing because we'd probably end up with a belt that has an upside-down medallion whenever you pose a figure wearing it. As it is now, you can manipulate the center medallion and it will stay in place. Like the modern U.S. title, this one features vac-metal plates (albeit, silver instead of gold) and some beautifully applied paint apps, making it stand-out in a display filled with WWE championship belts. Although it's not as beefy as modern WWE titles usually are, it's just as long and just as adjustable as the belts we've received so far.

If you own any of the previous Elite Collection John Cena figures, then you already know how the sculpt on his DM release turned out. The DM figure features the smiling face seen in the later waves. The only Elite Cena I own is the series 3 figure, so you can click on that link if you need specifics on the sculpt.

On the DM figure the shorts were molded in black plastic and while they don't have any additional paint applications, I think they turned out a bit better than the blue plastic on the other figures used to recreate his blue jean shorts. The black doesn't suffer as much from the lack of paintwashes or highlights. Cena's paint apps in general are very minimal, and inspite of occupying the most slots for a single Superstar in all of their lines, Mattel still insists on using bare forearms with painted wristbands for him. Seriously, with the amount of Cena figures they've released, sculpting new forearms would have paid for themselves already. The "chain gang" tampos aren't as detailed as we've seen with other Cena logos, so it's a bit disappointing considering the pricepoint. Aside from that I didn't encounter any major paint issues on the figure. 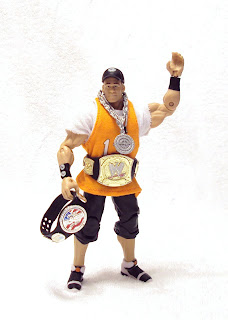 In all, I say he turned out to be a "very good" figure in the line, and I'm not a fan of Cena's. I really think the last two waves of "Defining Moments" were fantastic, even better than the first two, so I'm truly bummed that we haven't seen anymore. I don't know if Mattel has actually confirmed the demise of the line already, but I'm hoping we eventually see a few more series released because there are quite a few Superstars that deserve the DM treatment.