So you're a Transformers fan who joined the whole Classics (Universe/Henkei! Henkei!/Generations/United/Reveal the Shield) collecting a bit late in the game, but are determined to have a representation of every G1 cast member one way or another without having to resort to selling your organs or other bodily contents to afford some of the harder to find characters. Well, if scale isn't an issue, but you want to avoid the pricey 3rd Party route, you're in luck! Thanks to the introduction of the "Cyberverse" line during the release of Transformers: Dark of the Moon toys you can have an updated, mini-bot version of the G1 Autobot high-flier, Powerglide!

Powerglide is only my third DOTM Cyberverse figure behind "Battle Steel" Optimus Prime and Guzzle, but I have to admit he may be my favorite one so far. While Optimus Prime was picked up as a curious purchase during a TF drought (I don't care for the movie figures), I specifically wanted Guzzle and Powerglide for my "classics" collection. Guzzle is a cool little figure and he looks great next to Kup and a few other Wreckers, but PG is a fun little toy overall and features an awesome alt-mode, an A-10 Thunderbolt II, just like the classic G1 version. In this mode he is heavily armed and appropriately menacing!

PG is mostly molded in maroon and grey plastics, but features plenty of paint applications to bring out a lot of his details like the face, cockpit canopy and internal components. The dark red color evokes the classic look of the character while provided a real-world tone (as opposed to overly bright cartoon tones). Silver and a very light metallic blue make up most of his other apps and are all applied very well.

Converting Powerglide from "Warthog" to robot seems more complicated than it actually is, but manages to be gratifyingly engaging in a way not many Cyberverse (including the newer Prime series) figures are. When you're done with the process you find all the hallmarks of G1 Powerglide: conehead, "wings" coming up the sides of his chest and engines in the lower legs. 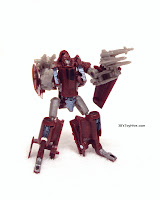 At this scale the overly detailed facial designs and usual endoskeletal designs of the Bayverse Transformers aren't as prominent and are a lot easier to overlook allowing them to blend in better than Deluxe or Voyager-sized figures.

Powerglide's payload in airplane mode are made into handheld weapons when he's in bot mode. Each equate to not much more than clusters of missiles he holds in his hands, but they still look intimidating. I was surprised to see that each set actually fold in half to form his blasters, that seems to be more of a Deluxe figure trait.

Articulation is very well done for PG and enough to make larger figures envious. He's definitely come a long way from his toy shelf debut in 1985 when he had barely any movement at all. Hasbro smartly incorporated ball joints that pull double duty for Powerglide in robot mode and during his transformation. 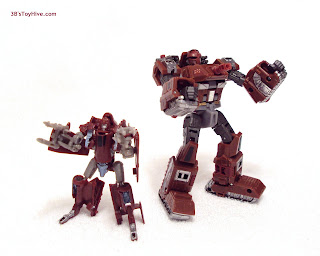 I know that technically Powerglide already saw release in the 2008 "Universe" line, even being repainted in his more familiar red deco. And while that figure isn't too expensive right now (you can usually find one for $40-50 online), I'm not in a hurry to add another Voyager + size figure to my Autobot ranks after picking up Grapple, Inferno and most recently, Jetfire.

After the success of their updated Warpath from the "Generations" line, I think Hasbro could deliver a fantastic deluxe class Powerglide. Although it does seem that with the reveals of the 2013 series, apparently focusing only on Fall of Cybertron designs, they'll be delivering much smaller figures in the future. That doesn't bode well for missing G1'ers, Trailbreaker, Shockwave and the Dino-bots. In the meantime, Cyberverse Powerglide is a more-than-okay fit in my collection until I change my mind about the ultra class figure or Hasbro delivers a knock-out deluxe! 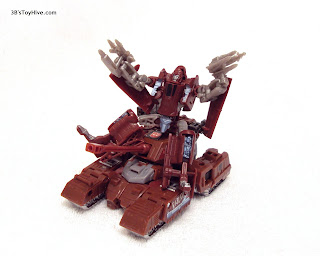