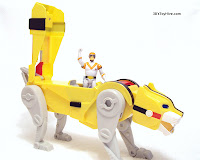 With Mattel's release of the Yellow Lion and it's pilot, Hunk, we're two fifths of the way to completing the "epic scale" 23" Voltron robot and Team Voltron. If you missed my review of the first lion/pilot set you can click here to read about Lance and his Red Lion. As far as today's review subjects go, there is some good and some bad to be found, however I can tell you right now that there isn't anything that changed my mind about the overall "meh"-ness of the line, but go ahead and take a look just for shits-and-giggles.

First, I'm happy to report that aside from the usual unusually long ship time, I didn't have any issues with the delivery. That should be a given, but with Digital River, we have to appreciate them getting it right.

I'm far more interested in assembling the giant Voltron figure than I am in displaying the individual robots and pilots. To that end the yellow lion is important as he forms Voltron's (lower) left leg. You can see turnaround shots of the Sinestro Corps Lion in the photo above. I should note that the panel that forms the lions chest actually flips down to add support for the massive combined robot. I didn't bother photographing now because it will inevitably be covered once Voltron is completed. Plus I wanted to focus on the yellow lion in this review.

Convertying YL into his leg mode is an unnecessarily frustrating endeavor, at least with my figure, because moving one limb triggers the spring-loaded, "auto-transforming" feature and limbs that were already tucked away pop back out. The same goes with it's head. Unlike the Red Lion, Yellow only has one button to activate the feature and that's why manipulating one pair of legs affects the other pair. The weak locking mechanism raises concerns about how effective it will be when all the lions are combined.

Locking legs, aside, let's see what Mattel delivered in the way of a robotic lion toy. 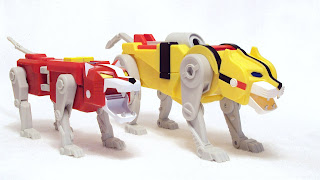 Upon opening the large white mailer box (which is used for the actual mailing), you'll immediately notice that Yellow Lion is a BFT. He's roughly twice the size of his crimson-colored crony and just like RL features the spring-gimmick legs. However, Yellow doesn't have springs in his tail, allowing for some posing. The legs suffer just as much as Red's with the added hindrance of a floppy head. Posability is limited, to say the least. I am happy to say that you are still able to achieve the iconic "flying" pose of the lions, so that counts for something. 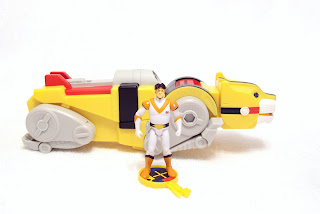 Yellow Lion's hulking size also extends to it's pilot, Hunk, who is sculpted appropriately larger than the slender Red Lion pilot, Lance. Hunk features two interchangeable heads (one with a helmet, the other without), a key to unlock his lion and a piece of the "blazing sword" for Voltron. Hunk is a 100% newly sculpted piece, unable to share any parts with Lance due to their size difference. He does, however, feature all the same details right down to the holstered blaster sculpted on his belt. It's kind of funny that Hunk's blaster is actually a larger sculpt than Lance's. I guess in the future(?) world of Voltron, even your sidearm is custom-sized for you. Mattel also made sure to keep all the restricted articulation we previously encountered on Lance. The range of motion in Hunk's elbows and knees absolutely sucks. Think Hal Jordan from the Green Lantern Movie Masters line.

Another problem I encountered on Hunk is the way his feet are sculpted (there isn't any ankle articulation) makes him pose in an odd stance, kind of leaning forward at the ankles. Also, he seems to have "knock-knees", maybe he's just afraid to ride into space inside a plastic lion... 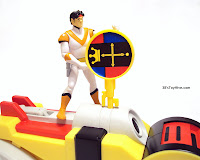 Which brings us to how Hunk opens the Yellow Lion. Like Lance, Hunk includes a lion key that doubles as his stand. It's appropriately Yellow so the other pilots know which lion it's for. The kicker is that it's the same sculpt as the Red Lion key. The bigger kicker is that you don't actually need the keys to open any of the lions (unless Mattel makes some changes for the last three releases). 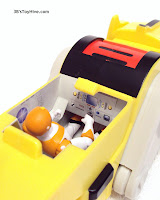 Once Hunk's used his enormous key to unlock his lion, he has to stand well clear of the top portion of the robotic feline lest he be catapulted into oblivion. You can see how YL opens in the intro picture. It's not as fancy as Red Lion.

Inside the cockpit you'll find the same kind of detailing we saw with Red. The stickers that make up the "controls" are nearly identical, accept they've been formatted to fit the interior of the Yellow Lion specifically. For Hunk to fit correctly inside the lion, you need to make sure to tuck his feet into the hollow portion of the lion's neck first before resting him in his chair. Once he's appropriately seated you can close the large lid over his head and he's ready for take off. 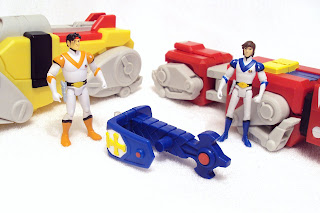 Hunk's final accessory isn't for him, rather it's another piece for Voltron's "blazing sword". Hunk includes the guard which connects to the handle that came with Lance. It should be noted that once these pieces are combined they are not meant to be separated and I strongly believe doing so would cause either one or both to break. I don't think it will be an issue as I don't see the appeal in separating the sword into it's individual components once you have all the pieces. 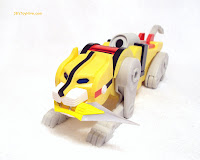 Yellow Lion includes his own weapon: a blade he can carry in his mouth. It's a different sculpt than the one we saw with Red Lion, so in that respect it's a cool accessory. I still think the whole "mouth blade" concept is ridiculous, but then again- giant robot lions. Also, I still haven't figured out if the blades were used in the cartoon, so if anyone knows for sure, please comment below!

Yellow Lion doesn't hold his blade as secure as Red, but I'm not sure if the issue is with the thickness of the blade's handle or the ratchet joint in the lion's jaw. Even if I decide to pose the lions while separated, I doubt I'll have them holding the blades on my shelf. They just look too silly for me.

Overall, Hunk didn't do anything to change my mind about how crappy the pilot figures turned out and Yellow Lion only pleased me a little bit more than the first lion. Actually, I feel Mattel did a much better job with YL. They achieved a bit more "character" with Yellow's sculpt and inspite of also having to accomodate a 4" action figure inside it, YL seems better proportioned than Red Lion. His size is obviously beneficial to that aspect, but it's still a nice job on Mattel's part. Admittedly, I'm much more excited now for the prospect of getting the Blue & Black lions, however, those will be the last two we receive because up next is the Green Lion with the pixie-like, Pidge. I think Red Lion is a good indication of what we can expect with GL, so the pilot will bring the biggest differences to the line so far.