When it came time for Mattel to introduce Daniel Bryan in the Elite Collection, they decided to pull a fast one on fans by releasing two of them almost simultaneously. The first as part of series 12 capturing his look while he was the United States Champion. The second, part of the Toys R Us-exclusive "Best of Pay-Per-View" series and featuring Bryan from his SummerSlam 2010 appearance. As much as I would like to be a completist, at the very least for the benefit of those who visit the Hive for WWE figure reviews, I certainly can't afford to be, but I knew I wanted a Daniel Bryan figure. "Swarm" to find out why I picked this one and whether or not he's worth it! 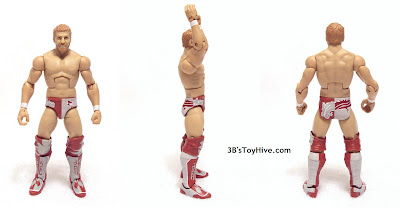 When photos and official press pics were released of the two Daniel Bryan figures, I almost instantly decided on picking up the TRU-exclusive version because I liked the decos and the accessory a lot better on that figure. I encountered the E12 figure first and getting a close look at him gave me a new appreciation of his Asian-inspired decos, but I ultimately passed on him and held out for the TRU figure. After a couple of months I finally came across the figure at my local TRU and was promptly disappointed. His headscan turned out more gloomy than angry and the white decos were very weak over his maroon tights. Since he was a TRU exclusive that included a piece of Michael Cole, the $20.99 pricetag didn't sway me either.

The only thing I liked more about the TRU figure was his t-shirt accessory, but that was it and I wasn't about to spend twenty-two bucks just for the shirt. I went on to buy the E12 version at K-mart a week or two later and at that point I had skipped over the figure several times at Target, so I was a bit worried I wouldn't be able to find him at retail. I was relieved, but I still wanted that t-shirt. I decided to check eBay and perhaps someone would be selling just the shirt, but instead I found someone who was selling the Elite 12 figure with the TRU-exclusive's t-shirt. I placed a bid and ended up winning the auction for about $23 and received him shortly after.

The figure is a great representation of Bryan, using the modestly toned body we've seen on CM Punk's figures. In fact, this figure is pretty much identical to Punk's with the addition of a new head and smaller knee pads. Likewise, the articulation works just the same, but slightly improved in the knees thanks to the less obstructive pads. 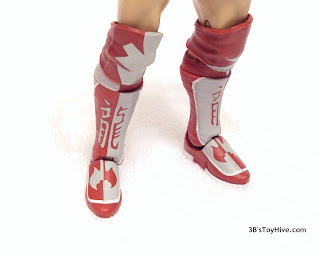 Though I initially found the Asian deco's a bit cliched, they eventually grew on me and I think they look great. The decos are achieved with the use of red, white and grey paints and are all mostly well-applied. The white outlines are a bit fuzzy and can be a bit sloppy at certain points, but nothing too noticeable unless you look at him up close. The rest of the paintwork on Bryan is fine, but I do wish they had added a wash to his hair to give it some definition. As is, his hair is solid orange and fails to look realistic. I can't harp on the figure too much for that because Mattel's released a lot of WWE figures like that in the last two and a half years. 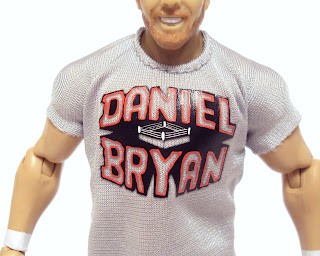 Originally the wave 12 figure included the U.S. title belt we first saw with The Miz in series 9, however the vac-metal finish didn't "cost out" for this wave and that means Bryan received a dull, painted belt instead. That kind of sucks. I'm glad Mattel started adding the unpainted belts to the "Basic" lines, and that's okay for those kid-friendlier toys, but at the Elite level (i.e. higher price-point) these are not acceptable. And that goes double when it's the only accessory included with the figure. 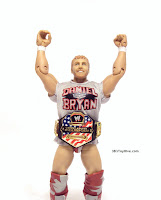 Because of that I had no problem returning the E12 figure, with the un-shiny belt, to Kmart and since I already had Miz, I could just swipe the belt from him (as pictured to the left) depending on my display.

The "Daniel Bryan" t-shirt accessory included with the TRU figure is the best accessory they could have given him. I remember when he debuted it on WWE TV, I was immediately a fan of it. It relays a simplicity perfect for the character at the time: nothing but a wrestling ring and his name printed in big bold lettering. The shirt is made of a nice shiny material, but works the same as the other cloth t-shirts we've seen in the line. A simple, thin strip of velcro keeps it closed on the back. The printing on the shirt is crisp and translated well from the screen.

Aside from the better decos, or specifically, better application of the decos, on the E12 figure, I really like the smiling headsculpt much better for Bryan, the only drawback like stated above is the better accessory is included with the TRU release. If you can find a deal like the one I found on eBay, I think you'll be very pleased with him. Otherwise, I still prefer & recommend the mass-retail figure, inspite of that stupid, half-assed belt. Why? He's several dollars cheaper and looks nicer all-around. Ultimately, this won't be my only Daniel Bryan figure as we're sure to get the inevitable World Champion version with his crew cut and beard AND, hopefully, his "Yes! Yes! Yes!" t-shirt. 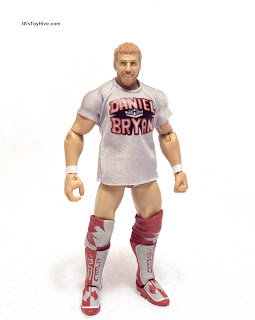