It doesn't feel like I reviewed Edge's WWE Elite series 8 figure that long ago, but it's actually been almost 10 months and now we have a new figure to look at. Well, it's new, but it's not... You see THIS Edge figure is a FLASHBACK figure, capturing the eventual "Rated-R Superstar" early in his WWE career. Being a huge fan of the then-WWF during it's Attitude-era, this was a must-have for me and given the fact that Edge is now retired, we can consider this his WWE Legends figure. But for those of you not keeping count, this is Mattel's third Elite Edge action figure, so is he worth the increasing price tag or an easy pass?

Flashback Edge reuses the sculpt from the previous versions with two new addtions: his head and his boots. This time around I think Mattel did a good job of capturing Edge's face, or at least it's significantly better than the previous attempts. It's not quite 100% Edge and there something that throws off the expression, I think it's the static brow, but I enjoy this one a lot more. And with those crazy glasses on, he looks perfect! His hair is a separate, glued-on piece and doesn't look terrible, but it's molded to fall over his coat so when he isn't wearing the coat it floats above his shoulders. I recommend a little time under a hairdryer if you plan to pose him without his entrance gear.

The other new addition are his boots. They are very similar to the kickpad-style boots we've seen on his wave 1 & 8 figures, but these feature much less prominent pads which make the boots look almost completely smooth. Everything else on Edge is the same as his other figures, including the removable elbow pads.

This time around, Edge's costume at the time required a bit more detail in the paint department. His lower body (except for the boots) is molded in a vibrant blue plastic. That same blue tone is used to paint the wrist tape on his forearms. As this is meant to represent a younger version of Edge, before he racked up several tattoos, not much was needed in the form of body art for this figure. He has one, mono colored, tattoo on his right shoulder. Nothing fancy, so I didn't bother shooting a close-up photo of it, but it's neatly done.

The tampos on his tights and boots are all-new to the line and were all really well-executed. While the desing may look simplistic, it actually features a lot of detail. For starters the "flame burst" is done in two-tone using gold and silver and outlined in black. It also includes roughly 20 separate items on each leg, the largest of which features "EDGE" made of negative space, allowing the blue plastic to show through. Not only that, the design runs across four different parts: lower leg, knee, upper leg and hip, and lines up perfectly! Rather impressive when you take the time to look at it closely. His boots also feature silver, encircled crosses, trademarks of his early WWE days and something homaged in tattoos on his forearms today (which are visible on the E8 figure). 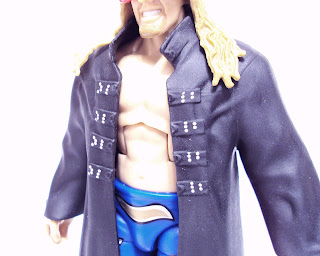 Staying true to authenticity, Mattel delivered a new coat for Attitude-era Edge. This one is almost all smooth, save the buckles over the chest area and a couple of other minor details. Unfortunately, it's molded from plastic that's too stiff to allow for posing, just like the previous coat. I accept the fact that cloth goods are too expensive even at the Elite pricepoint, but it's a bit of a bummer to have to pose him in such a stiff stance. I wonder if they've tried molding these with the sleeves slightly bent. Just straight enough to allow the arms to slide in, but angled in a way that results in a more natural-looking pose. We may have to "pose" that question to the design team.

Edge's other accessory is a pair of ridiculously looking sunglasses. These are more akin to the lenses he wore during his long-time tag team partnership with best friend, Christian, as opposed to the sleeker designs he sported earlier on. It leads me to believe that we may see a FLASHBACK version of Christian (hopefully) soon. You may remember he sported even more ridiculously looking goggles that featured straps going over his head. An FB Christian paired up with this Edge, would be magical, though. I'm not a fan of "Captain Charisma" Christian. 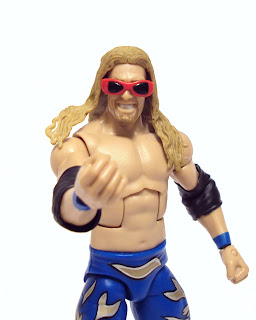 In all, this is a very nice, sure-to-please, version of Edge for fans of the Rated-R Superstar and an impressive Elite figure thanks to the great decos on the tights. I prefer this figure much better to the previous releases and was happy to scoop it up and sell off the E8 figure. If you have any of the other figures, you may not feel the need to add this one, unless you're a child of the Attitude-era, like myself, then he's an absolute "must-have."