I don't know what happened, but April & May seem like a blur to me. I feel like the past two months just evaporated! Anyway, I believe it was late March when I teased an image of the then upcoming Currently on Display via the Facebook page, but that entry never came. Nor did it arrive in May. However, we're less than one week into June and I'm finally getting around to posting a new edition of COD featuring some toys that have been on display before and some that have never been displayed on any of my shelves!

I think the overall "theme" for the main display should be pretty obvious, but it's also a celebtration of the triumphant return of Marvel Legends and a nod to next month's highly-anticipated, prequel/reboot, The Amazing Spider-man.

Please excuse the blurry pictures this month, I has some problems with my camera and didn't take a look at these photos until a week or so after changing the display (yep, this is actually NOT a "current" display... sorry.). Sitting atop the display case are this year's TFCC exclusives, Runamuck (freebie) and Runabout (a.k.a. Over-Run). If you're at all familiar with the issues surrounding the club this year, you know there was a lot of misplaced controversy surrounding these figures. I don't care to delve into what happened, but I will say that I was affected by it and it was a pain-in-the-ass to resolve. Aside from that, the figures turned out well and I'm glad to have them in my TF collection. I should be posting a review of the pair some time soon.

On the opposite end is Skeletor proudly straddling his faithful companion, Panthor. I wasn't sure I would purchase the big purple feline, admittedly my interest in Masters of the Universe Classics has waned immensely this year due to the budget constraints and my major TF consumption over the past 10 months. However, there was an item that went on sale in April that I wanted for a friend's upcoming birthday and I was already ordering Diamond Dallas Page, so I added Panthor, too. I'm glad I did because he looks great and I don't think I could have He-Man riding Battle Cat while Skeletor walked to the battlefield. And, as you can see, I dig his helmet. 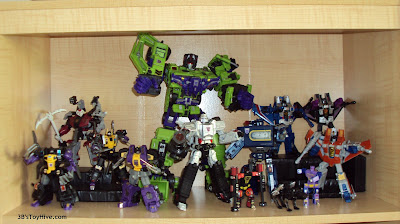 Below those motley deviants is a new Decepticon display [from left to right: Shrapnel, Skullgrin, Kickback, Bombshell, Devastator, Megatron, Rumble, Soundave, Thundercracker, Ravage, Frenzy, Skywarp, Starscream] that primarily focuses on the season 1 characters. I don't have any version of Reflector, yet, so to fill-in some space, I tossed in Skullgrin. This display gives some perspect on just how big the completed Hercules figure is. He can't stand straight inside the case and I had to remove the crane arm that sits on his left shoulder.

This is the first time I display all of FansProject's Insecticon homages fully decked out with their corresponding Repro Label decals and I must say they look even better now. RL is very close to completing the final two sets for the Hercules members, Dr. Crank and Neckbreaker. Since taking these photos I've added the "'Classics' Scrapper" kit for Structor and ordered the "'Classics' Mixmaster" set for Madblender. I plan to re-review the Hercules team once I've stickered them all up. 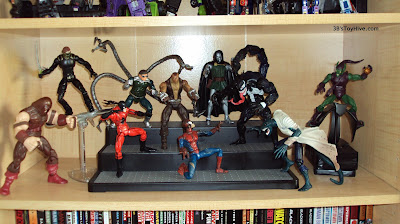 On the second interior shelf I'm celebrating Marvel Legends being back in stores (although no new figures are displayed) with some classic villains from both Toy Biz' & Hasbro's incarnation of the line and the Spider-Man Origins/Classics series with a severly battle-damaged wall-crawler at the center of it all [l to r: Juggernaut, New Goblin (Harry Osborn), Tarantula, Doctor Octupus, Shocker, Spider-Man, Dr. Doom, Venom (Mac Gargan), Lizard, Green Goblin].

It's a crazy blend of villains Spidey's faced off against in the comics, cartoons and movies. I had fun setting this one up and the crazed look on Doc Ock's face made him my favorite out of the bunch. There are several other villains I wish I had for this display, but the one I'd like to include most is J. Jonah Jameson. He would really complete this type of display marvelously. 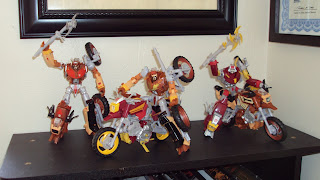 Moving on, we have a nice little team of Junkions, led by the Wreck-Gar. This squad is composed of three WG figures from the Transformers "Reveal the Shield" line and two "Junkheap" remold/recolors from the "Generations" line. The Wreck-Gar figures are each sporting Repro Labels kits, the "'Classic' Wreck-Gar" set for the leader and the "'Classic Junkions 1" set for the the others, which I've cleverly named Flotsam & Jetsam (okay, not that clever...). There is a second Junkion kit by Repro Labels which I should be receiving soon and will help the Junkheap figures contrast nicely from one another.

Finally, my new desk is making itself useful for more than just housing my PC with the Wreckers (well, some of them, anyway) displayed on it's nice, wide hutch shelf. This is a team I only recently became aware of through the fantastic Last Stand of the Wreckers story by IDW, but I've quickly grown to enjoy them and assembling a complete team is a side goal of my long-term TF collecting, although many of the characters in the story haven't received action figures... yet. [l to r: Perceptor, Kup, Springer, Guzzle, Blurr]

The four deluxe figures pictured all have Repro Labels upgrades with Perceptor & Kup also enjoying weapon upgrades from iGear. Kup looks even better than the standard Hasbro figure thanks to the third party-produced head upgrade, also from iGear. If I haven't mentioned it before, Perceptor's RL decal set is one of my favorite RL kits ever! It makes his robot mode look nice, but the vehicle mode really benefits from the stickers and just looks fantastic. Springer is 100% 3rd Party coming to us via FansProject and is an excellent figure, although he's very back heavy and that causes him to fall backwards most of the time. His RL set is really well-done, however the shoulder decals on mine have been mauled during his transformation. And in case you're wondering, his carrying WFC Optimus Prime's rifle in the picture.

Well, that concludes the Hive's "Villains" edition of COD. I didn't take a close-up shot of the third shelf, but it features CM Punk in his tribute attire to the late "Macho Man" Randy Savage with the TF "Power Core Combiner" Grimstone on the other end. Those three aren't villains, but I thought I could use a few good guys to break up the "evil" on the main display area.

Check back next month for a new display featuring more baddies!