When I reviewed The Rockers last year, I mentioned that they, along with today's review subjects, the Von Erichs, were originally slated for the second wave of Toys R Us-exclusive WWE Legends Two-Packs which was cancelled due to the first wave pegwarming so bad it can still be found at TRUs to this very day. The Rockers set remained intact, sold as an exclusive on Matty Collector, but Kevin & Kerry Von Erich were separated and slotted in with the final retail wave of single-carded Legends. The Von Erichs were a bit before my time and weren't really a huge part of the WWF, so I don't hold any nostalgia for them (except this version of Kerry) and wasn't in a rush to pick up these figures. I decided to wait for some kind of sale before buying them. In the months since Legends wave 6 was released a few BOGO sales came and went, yet I wasn't motivated enough to lay down the cash for these. It just so happened that last month the TRU near my job was having a massive clearance prior to closing down for remodeling. A week before they closed their doors, I finally went in and found possibly the last two Von Erich figures in the store and ended up paying $5.20 for each. Now THAT is a deal! 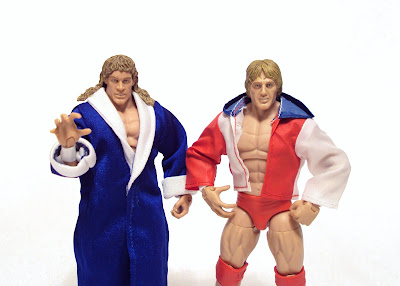 If you own Texas Tornado, you already know what to expect from the Von Erich-version of Kerry; it's the exact same sculpt right down to the large knee pads, but without the boot tassels. The difference is in the paint decos and the accessory. On this figure, Kerry is sporting a full blue robe with a white trip and a bird silhoutte printed in white on the back. The robe utilizes a simple velcro closure on the front. 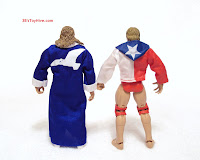 Kerry's older brother Kevin also only features one accessory (seems to be a theme with this entire wave): a Texas state flag jacket. It's very similar in feel to the jacket included with Elite 13 Cody Rhodes, even featuring a hood which is tied down to the back of the jacket to effectively resemble the triangular portion of the Lone Star state's colors.

There isn't any type of closure on the jacket, though, it just fits snugly around the figure's torso. This is attributed to the stiffness of the material the accessory is made from. Inspite of the hood ending up as just a flap over the back of the jacket, it is a full hoo and if you were inclined to cut the stitch holding it down, it would fit over and shroud the figure's head effectively. I'm keeping mine tied down, though. 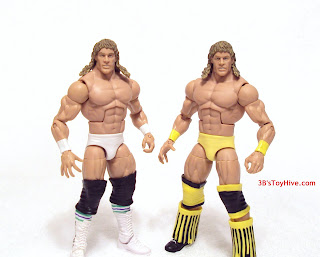 Like I stated above we've pretty much already seen Kerry's figure before and it suffers from the same odd head sculpt as the TT figure did. To deliver this figure Mattel only had to remold the crotch piece and boots in white plastic, then add white, blue and green paint for the wrist tape and striped socks. His boots also feature "KERRY" printed vertically down the side of each boot in black paint.

Since I'm not familiar with Kerry Von Erich prior to his turn as the Texas Tornado, I can't really say how accurate or inaccurate this deco is on the figure. I will point out that the card art depicts him wearing a thin headband around his head, just below the hairline and that is not present on the figure. Again, I don't know the relevance of the headband, whether it was something he always wore or not, but just like the snake-handling glove depicted on series 2's Jake Roberts' bio, it's omission stands out on the final product.

I wish I could say the design team did a better job sculpting Kevin's head, but his is quite possibly the worst head sculpt in the entire WWE Legends line. It's not so much the head as it is the face, which turned out as a bizarre amalgamation of young Kevin Von Erich (as it was intended to be) and older, accepting WWE Hall of Fame induction, Kevin Von Erich. And I dare to say the figure looks even older than that! Age aside, it truthfully doesn't look like Kevin at all. Add to that the unnatural expression on his face and he makes for one weird addition to the Legends display. I don't know, I obviously know nothing about manufacturing toys, but it seems that if you utilize a digital 3D scanner the process becomes somewhat idiot proof. And if that fails, you surely would have (or contract) an artist to sculpt a decent represenation of the subject before you go into mass-production, right?

Boy, am I glad I paid under 6 bucks for this one. 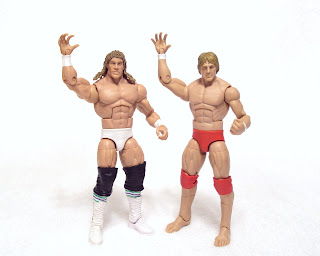 These two Von Erichs were certainly exceptionally fit specimens, but their body types differed from each other and that's reflected in the figures. Kevin utilizes the same upper body first released with wave 3's Brian Pillman with the exception of the "Iron Claw" right hand also seen on Texas Tornado/Kerry Von Erich. His lower body is a mix of old and new parts. The crotch, thighs and lower legs are the same as on Kerry's figures, however Kevin wrestled without sans boots so he received brand-new pieces below the calf swivels. Just like Kamala, Kevin's feet retain all the articulation we accept as the standard for this line. 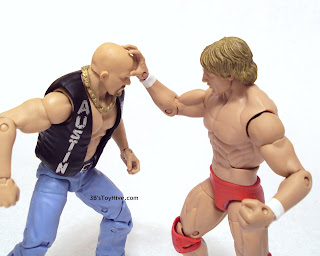 I certainly would have been disappointed in paying $30 for these two as a set on Matty Collector. I wasn't interested when they were $12.99 apiece and even Buy-One-Get-One 50% sales didn't get them into my cart. However, less than $12 for the pair was a great deal and definitely lets me overlook the horrible headsculpts. I'm glad to add them to the collection, but they won't be displayed in the front row any time soon.
Posted by 3B at 6:25 PM