As I stated in my last few posts I've been really busy with personal matters and clearing out space in my collection, so my post frequency has decreased. Today I'm playing a bit of catch-up (ketchup?) and going over the displays for July & August. Jump ahead for pics!

July (on the left) was dominated by the Transformers, but I sprinkled in a few other properties to keep things interesting. There were a lot of newer acquisitions on display in July starting with the top of the bookcase featuring Bane from The Dark Knight Rises Movie Masters line and MotuC Panthor, Skeletor's loyal pet. We'll take a closer look at each shelf up ahead.

On the right is the August display and you can see it's mostly dominated by DC characters with the aforementioned Bane joined by most of the other Movie Masters characters. The top of the bookcase is displaying the only two statues I own, both from DC Direct's seemingly never-ending Batman: Black and White series. The statue on the left is based on Frank Miller's art while the one on the right in Brian Bolland's interpretation of the Caped Crusader. 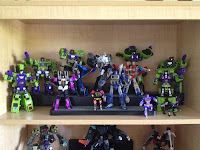 Megatron and most of his G1 (season 1) subordinates dominated the top shelf of the bookcase last month. As you can tell most of the figures on this shelf are unlicensed, "third party" toys and truth be told if it wasn't for them this shelf wouldn't exist. With the current state of Transformers toys, I'm glad the third party companies are out there giving us older fans modern versions of the classic characters we love without delivering flimsy, ever-shrinking action figures. I will say that I'm looking forward to many of the new Voyager-sized figures Hasbro is releasing in the Generations line later this year and early the next. 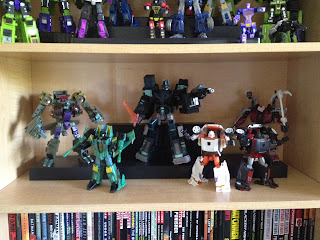 Below the top shelf the Decepticons continue their takeover of the July display with a little team I put together after picking up the 2008 SDCC exclusive Nemesis Prime and FansProject's "Shadow Commander" upgrade with a little help from Ewan over at Chase Variant. This year's TFCC exclusives were surrounded by lots of controversy and I was one of the people who were hit with credit card fraud, but with that aside "the Runs" are a beautiful set and it was great getting them in my collection. Lugnut is a really cool toy, that goes double when he's in vehicle mode! [l to r: Lugnut, Acidstorm, Nemesis Prime, Runamuck & Runabout and Skullgrin] 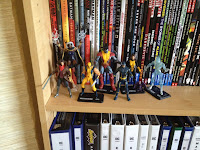 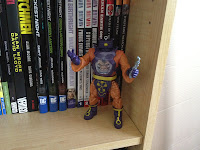 On the third shelf I put up my recently-acquired Marvel Universe X-Men figures [l to r: Gambit, Storm, Wolverine, Colossus, Cyclops, Kitty Pryde with Lockheed and Iceman]. I don't really know what the current X-Men team's roster is, but these are some of my favorites and for a few years my action figure X-team was the six characters from Joss Whedon's first run on Astonishing X-Men. However, when I decided to jump into Marvel Universe, I eliminated many of my Legends figures including that Ast. X-Men set. Colossus was the only MU X-Men figure I had two months ago (I picked him up when he was first released a couple of years ago along with Juggernaut), everyone else was picked up within the last eight weeks.

Opposite the X-Men is The Return of Marvel Legends wave 1 build-a-figure, Arnim Zola, a character I wasn't familiar with but was created by the legendary Jack Kirby and has that great "Kirby" look to him. I built him up piece by piece and actually already sold off the individual figures in the wave. Zola though, he'll look great in a future Kirby display or I may even toss him into a New Gods display. I think he'll fit right in with those characters. 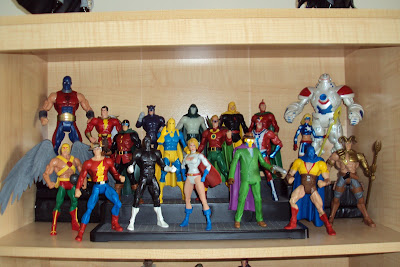 This was a fun one to put up. Ever since they announced Jay Garrick at SDCC 2011, I couldn't wait to set-up a JSA display. Of course, all that was marred by the issues I had in receiving Garrick, but he finally arrived and I immediately added him to the display, which I had just set-up after receiving Starman (the newer one). I tried to fit Hawkgirl in there, too, but since I was displaying the hooded Hawkman for the first time, I felt she didn't go with him. Maybe in a future display. 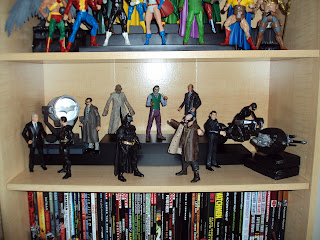 Decepticons giveway to the Dark Knight with a display that attempts to span the entire Christopher Nolan Batman trilogy. My batsignal is still missing the light-up piece, but what I already have looks fine for the display. That missing piece is packaged with the missing villain, Ra's al Ghul. I hope he starts showing up in my area soon because my local Kmart never restocked TDKRMM after the first few cases of wave 1, it appears Target has followed suit and Walmart (where I found Blake & Catwoman) is starting to get clogged with Batman. [l to r: Alfred, Bruce Wayne, Lt. Jim Gordon, Scarecrow, Batman, the Joker, Bane, Two-Face, Officer John Blake, Catwoman]

The X-Men are still hanging out on the third shelf, but if you look closely you can see there using new stands. I picked up a pack of 25 stands by Entertainment Earth for about $12 after shipping. They're circular so it's easier to use them in a group than the large, rectangular MU stands, plus these are just blank, generic stands.

To the right are the newly released Teenage Mutant Ninja Turtles from the upcoming Nickelodean animated series. If you haven't tried these out yet, you need to stop reading right NOW and go pick-up at the very least your favorite turtle. These things are awesome! I was planning to review them, but there are so many reviews everywhere and all positive, gushing reviews. Mine would just be redundant. These are really fun to play with and bring a bunch of accessories. I'm not even interested in the Classic line after getting these. 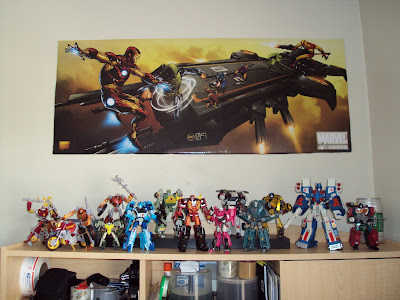 The hutch over my desk is still rocking G1, season 3 Autobots, with some slight changes and a welcomed addition. Like I stated earlier, if it wasn't for third party companies this display wouldn't be possible. We'd have Hot Rod and not Rodimus Prime, Magnus without the Ultra, no Arcee, a simple two-mode Springer, a crappy head for Kup, no Goldbug and just a bunch of Wreck-Gars & Junkheaps without any characteristics to make them appear like different characters. Perceptor would be standing around without any weapons, too. So "thank you" to FansProject. iGear. Perfect Effect. Beezleboss. And Repro Labels. Toys made by fans for fans. [l to r: Junkions (Junkheap on Flotsam, Wreck-Gar on Junkheap, Jetsam), Guzzle, Blurr, Springer, Rodimus w/ Firebolt, Arcee, Drift, Kup, Goldbug, Ultra Magnus, Perceptor]

The other addition you may notice is the Super Heli-carrier artwork on the wall. This is actually the backside of the box the giant vehicle comes in. Mine had some slight creases in it, but ultimately I thought the art was too cool to just throw in the trash. So I cut it out and taped it up on the wall. 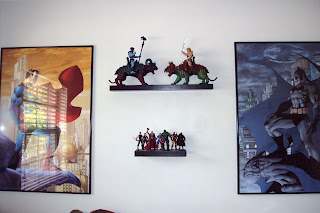 August also saw some added display space when I finally put up my old shelves. The top one is large enought to fit Skeletor and Panthor facing off against He-Man and Battle Cat. Below is my first ever Avengers display, this one focusing on the live-action team although I'm using the MU Hulk. I just can't bring myself to buy the movie figure. And again, those new 3.75" display stands came in handy! [l to r: Hawkeye, Black Widow, Thor, Captain America, Hulk, Iron Man (Mk VI), Nick Fury]

I was holding out for the upcoming Fury and super-articulated Mk VII Iron Man, but found the Iron Man 2 "Fury of Combat" box set on ToysRUs.com being clearanced and with a free shipping offer when you spend a certain amount of money and jumped at it. I think this Fury looks much more screen accurate, too, because the Avengers version seems to reuse the Winter Soldier body from the Captain America: The First Avenger comic line. Plus, the mark 6 Iron Man armor is my favorite live-action armor thus far. 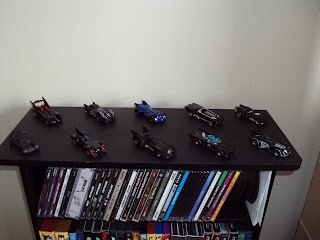 I also found some space to display my Hot Wheels Batmobile collection. When The Dark Knight Rises was released Walmart had an exclusive series of repackaged Batmobiles from the various movies, animated series and video games. I already had the Arkham Asylum, The Batman, '66 TV Series and Tumbler versions. I picked up the newest Mattel-designed, blue "MBX City" version and the DC Superhero Batman-car in stores. The rest I found at Walmart or on eBay. The Batmobile from Batman: The Animated Series continues to elude me, though, and it's going for too much on eBay. [back row, l to r: "Affinity", '89 Hard Noze, MBX City, DC Superheroes, The Batman. Front row: the Tumbler, The Brave and the Bold, '89 Burton, '66 TV series, Arkham Asylum.]

Okay, that's enough of that. Hope you enjoyed this look at my displays. Until next time, keep'em dust-free!