With today's post I submit my "application" to the League of Extraordinary Bloggers (LoEB), a cadre of blog writers from around the world (and possibly the universe) assembled by Brian over at Cool and Collected, which focuses on all things geek! Apart from networking with fellow bloggers the League hosts a weekly assignment where each blogger posts a response on their respective website. This week's assignment is Ninja Attack! and we're tasked with creating our perfect response team to evil ninjas employed by evil businessmen. Click ahead to see what I came up with!

There are a couple of rules to assembling the team: I had to use '80s characters only, but they can come from any medium, and I should limit the team to five members or less. Several Leaguers have already posted their teams and I did glance over a couple, but wanted to avoid being influenced by others so I won't read anymore until I finish my list. Afterwards, I'll update this post with links to the other posters.

So with the rules laid out I started to think about my team. Batman (specifically from Frank Miller's The Dark Knight Returns) sprang to mind, but then there wouldn't be a need for a team. RoboCop is another favorite and he's battled something worse than ninjas. ROBOT ninjas! However, he's confined to New Detroit, so there could be some jurisdictional issues with him. John McClane would be at the top of my list, but I saw him on someone else's list, so we'll leave him for another time. Here's what I came up with: 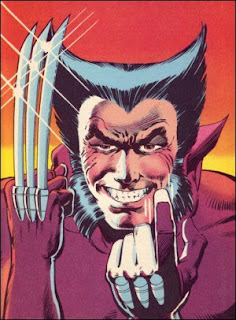 Yeah, I went there. And I'm talking about Chris Claremont & Frank Miller's Wolverine. Some might argue that he's as good as Batman on his own, but he's used to working with a team. Fighting ninjas? That's practically his specialty! Plus, he's on EVERY team!

2. Joe Armstrong
Snake Eyes appears on some of the other lists and I'll admit he instantly sprang to mind, but I decided to go with another army ninja, Private Joe Armstrong from the fantastically '80s, American Ninja!


Yep. He totally snapped that arrow in half. Suck it, evil ninjas!

Known as "the Terror of Melmac" (not really), this one is here purely for psychological warfare. Imagine the shock of running into a hairy, cat-consuming, 3-feet-tall alien on the battlefield. Plus, can you even kill ALF? How do we know he's not immune to being stabbed by swords and shurikens? Also, everyteam needs a mouthpiece, someone to run a distraction if things go South. Something Mr. Shumway excels at.

He can "kill" himself AND ninjas!

Everyone knows that ninjas are a global threat, doubly-so when they're backed by wealthy businessmen, so we'll need someone with access to vast amounts of information and government resources. A super-spy. For that we travel across the pond to England, but James Bond is too busy penetrating the defenses of some villainess, so we call Danger Mouse!

Bonus: he has an eyepatch, giving off a Nick Fury vibe!

He turned Ralph Macchio into the goddamn Karate Kid. He took on Johnny Lawrence and the best the Cobra Kai had to offer including their sensei, John Kreese, which he defeated with a Three Stooges nosehold! Then in the third movie he kicked that guy with the ponytail into his dojo's mirror wall and flipped his "Karate taunt" right back on him. Wax-on, bitches!

That's my team. They may not be the prettiest bunch, but they'll get the job done. Make sure to check out the other lists below for more ninja-bashing fun!

From around the League!
This assignment was created by Howie Decker at UnderScoopFire! Follow the link for his list.

The list at Green Plastic Squirt Gun included some characters (or at least characters from some properties) that I considered. I mean, Chuck Norris, come on!

Of Flying Monkeys and Ewoks oh my! (interesting title, by the way) shared my sentiment in employing an alien to throw off the ninjas!

At Memories of Toymorrow they've added a pro-wrestler. Why didn't I think of that?!

Dammit! I forgot about the awesomeness that is Billy Dee Williams, but Cold Slither Podcast didn't.

League organizer Brian posted his list over at Cool and Collected. It's a photo full of ninja-asskick!

Mr. R squeezed a RoboCop character into his list over on The Man Who Stares at Toys and Tackleberry!

Wolverine, Rambo and Hannibal? I love how a plan comes together at Rediscover the 80s!

Reis over at Lair of the Dork Horde put his team together in 3D!

Another team featuring Mr. Miyagi over at ShezCrafti! And my favorite Ninja Turtle, too!