Alright, I'm finally back with a brand-spanking-new review. It's been a while since I last tried this, so I wanted to do something special and change things up a bit. Today we're taking a look at a whole different breed of collectible: trading cards!

If you remember from my various "Currently on Display" posts, my main display area is a bookcase that aside from showing off action figures & vehicles is also home to my graphic novel and trading card collections. Jump ahead for a look at my absolute favorite card series: Marvel Universe Series II by Impel! 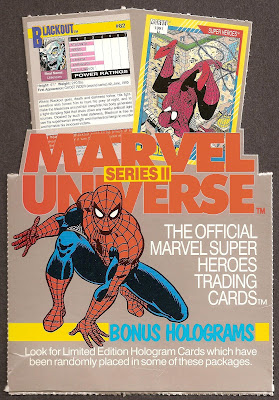 Some may find this odd, but I didn't learn much about Marvel characters from the comics, well, not at first. In fact I was mainly exposed to them thanks to cartoons and trading cards. In the early 1990's non-sports trading cards exploded and became hugely popular. Arguably the most successful series were based on Marvel characters, but you could find everything from DC to G.I. Joe to nearly every genre film out at the time and more. It seemed that along with toys and clothing, every property had trading cards. Heck, there were even "Operation: Desert Storm" trading cards.

I had no idea there were comic shops full of books and other items based on Spider-man, Batman or Superman until some classmates started bringing in the Marvel Universe trading cards to school. I was immediately fascinated and inquired as to where one might acquire these. So I started frequenting my local comic shop (which, ironically, wasn't very far from my home) and began collecting the little rectangular pieces of cardboard with interesting new characters printed on them.

Daredevil? Who is THAT?! The Avengers? Fantastic Four? Masters of Evil?!

It was sensory overload for 9-year-old 3B. I wanted more. My brother and I feverishly collected the cards, buying a few packs each week for months trying to complete the set. We'd bring in our doubles for trades or swap with other kids at school. Only once did we find a rare hologram card. It was the incredible Hulk. My brother loved the Hulk as a kid. That was firmly "his."

Anyway, we never actually completed the set, the random nature of the packs and buying them infrequently along with the eventual release of the next series contributed to that. It wasn't until years later, after I discovered eBay, that I was able to complete my own set of MU2 cards, holograms and all. Of course, it didn't stop there, I completed other sets I collected as a boy, too. The 1990 MU set, MU3, the X-Men series, DC Comics cards and sets I never even saw when they were originally released. All of them fairly easily and cheap to obtain in the early to mid-2000s. But it wasn't until 2008 when I decided I wanted to complete all of these sets and make them presentable in a way that let me appreciate them a lot more.

I decided that whenever possible I would purchase sealed "wax boxes" and utilize every aspect of the package in completing a set. The first picture is actually a scan of the box top. It features perforations that allow it to pop-up and form a "standee" at the back of the box so retailers can put them on the shelf in order to sell the packs inside individually. I cut it off and glued it to a piece of black construction paper which I cut to perfectly cover the front of the binder I would store the cards in. To avoid damaging the box art, I purchased a 1" binder with a plastic sleeve on the outside, letting me slide the box art in and creating a "custom" binder of sorts.

The next step, and I'll admit I didn't think of this until much later, was displaying the wrappers. Most of the later card series featured only one wrapper style, but the early MU sets featured multiple wrappers. In the case of MU2 wrappers featuring the Hulk, Spider-man and Wolverine. For these I just took a spare card from the set and wrapped the wrapper around it, securing it with tape on the back. Later I glued the various wrappers on to a sheet of paper, just like I did with the box art, then used a "sheet holder" to display them as the first page in the binder.

I wasn't sure how I would review this, but I knew I wasn't going to scan each individual card. With 160+ cards in the set it would take too long! So what I did was just scan each page of nine cards and that helped me get it done in about an hour. You can click on each picture to enlarge it and get a better look at each card.

The first six pages are all solo pictures of the Super Heroes and showcase the heavies: Spidey, the Avengers, X-Men, plus the F4, Daredevil and Excalibur. A few other random characters are featured, too.

The next section are the Super-Villains and although they only get four pages, all the big-bads are accounted for, including: Magneto, Galactus, Dr. Doom and Thanos.

There are lots of Spider-Man rogues in here. No doubt he was considered (and I guess, still is) Marvel's top star. It's probably a good time to talk about what each of the single heroes & villains cards feature. If you look at my scan of the box art you can see what the back of the cards looks like. Information about "real names", power ratings, vital statisctics, first appearance and a short biography on each character can be found on every card.

The next section focuses on Arch-Enemies and features a hero fighting a villain (in some cases, a hero fighting another hero). As you can see these are laid out wide-screen style, so there are actually sideways in the binder. Most of the artwork here is exciting with the involved characters going at each other full blast. The backside of the cards in this section give you a brief history of the respective feuds, usually how they started and include the name and number of the comic the combatants "first encountered" each other. I think my favorite is "J. Jonah Jameson vs. Spider-Man".

Moving on we arrive at one of my favorite sections in all the MU series I own: Weapons. This subset focuses on some of the most icon weapons used by the heroes and villains of the Marvel Universe. Here you can find all sorts of specifications on weapons from Wolverine's claws to the Mandarin's ten rings. Want to know how much Mjolnir weighs? 42.3 lbs. It seemed a lot heavier when it was placed on Loki's chest in 2011's Thor. Need to know what modifications Frank Castle's made to his favorite handgun? It's all there. Plenty of cool data to read through. 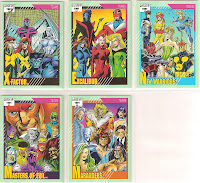 Here's where the layout of the series gets a bit wonky. Up until this page every section fit perfectly into the 9-slot pages, but the weapons section features three extra cards before the Legends come in. Captain America's (then-)deceased sidekick, Bucky, Spidey rogues the Green Goblin and Kraven and a few others can be found here. These cards also feature stats and bios like the single character cards along with some details of their demise.

The series then jumps into a five-card subset focusing on Rookies. Darkhawk probably being the most popular of these, although the New Fantastic Four was always a favorite of mine. Wolverine, Hulk, Spider-Man AND the Ghost Rider on one team? Insanity!

The remaining four slots on that page introduce the Teams section which then continues on to the next page, leaving four slots for the three Power Ratings cards and the checklist, finishing out the base set. I separated the ratings & checklist cards in order to scan both sides and show them to you on one picture. The power ratings describe what each category means and what the numeric rating equates to. Interesting when you think someone sat down and came up with these values. The checklist details all the cards in the series ordered by number and broken up into each section, including the five bonus hologram cards. 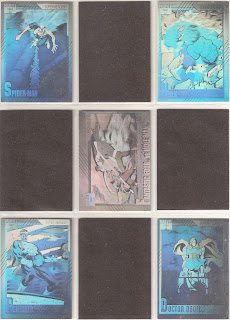 The bonus, or "chase", set for Marvel Universe Series II consists of five hologram cards which were all the rage in the '90s. I wasn't sure how these would show up once scanned, but you're at least able to make out the images. It's a shame you can't see the various colors involved with the cards, they're really fun to look at. If you're not familiar with holograms, you can read about how they work by clicking here.

Because there are only five holograms in this set, I wanted to spread them out across the 9-pocket page. I put cards 1-4 into the corner slots and the fifth card, depicting a battle between the Fantastic Four and Mole Man, in the center pocket. I once again called upon black construction paper to fill-in the empty pockets, creating a nice, solid final page.

When I first started collecting comic cards, I started with series 2 of MU, but I did eventually pick up some of the first series. However, MU2 was the first card series I collected and that's why I chose it as the first set I review. Marvel Universe trading cards introduced me to the pantheon of Marvel characters and sparked my imagination. It became the reason I wanted to buy the toys and learn more about the characters and ultimately lead me to the comics. MU2 holds a very special place in this collector's heart and every now and again I like to pull the binder out of my bookcase, take a seat and look through it to remind me of simpler times.

It seems nowadays most non-sport trading cards are game-based and don't really teach you much about the characters. I hope you've enjoyed this look at the classic MU2 card series. I'm looking forward to sharing more of my card collections for those of you who never completed them or may not have even known they existed. Maybe next time we'll take a look at a DC Comics set. Until next time!