Today I'm introducing a new feature to the Hive, a review of sorts with a twist. I'm calling it "Return'd" Sometimes we buy toys that turn out to be crappy, or just don't live up to certain expectations. Now I'm not talking about defects or missing pieces/paint apps, etc. I'm talking about true disappointment. A toy that just doesn't deliver anything positive to the collection.

I have to tip my hat to certain bloggers who are able to photograph new purchases right away and have something posted within a day, but I don't have the time for that so you won't be seeing any of my photos here. Also, because the subject of the review was returned I feel it would be wrong to do so after having photographed it for the purposes of a negative review. I have ethics, damnabbit! But I'll add stock photos (if available) to make sure you know what I'm writing about.

Our first return comes from Mattel's underwhelming The Dark Knight Rises movie line. Not the Movie Masters line, but the "kid-aimed", laughable 3.75" scale line. There's a Batmobile, so it can't be that bad, right? Well, click ahead to find out. 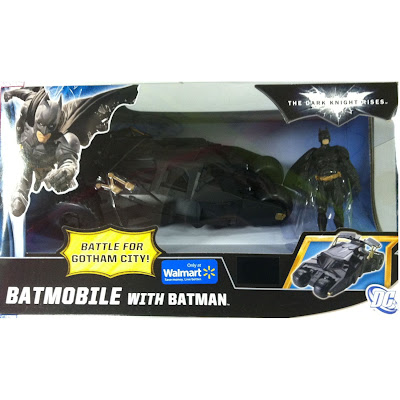 This set includes a Batmobile vehicle with an opening cockpit featuring accomodations for the included Batman figure. Mattel might have you believe this is a new toy made specifically for the 2012 blockbuster film, but not so. This toy was originally released as part of the 2008 The Dark Knight toy line (see original release here). I know because I used to have that toy and even back then was disappointed by it, promptly selling it off on eBay. Of course, I didn't remember that toy until after purchasing & messing around with the new one a bit.

Based on Mattel's history in the 3.75" scale, I didn't expect anything from the Batman figure, but was hoping the Batmobile would be cool enough to use with my budding modern G.I. Joe & Marvel Universe collections. There's a rumor that Mattel will release a camouflaged variant and I thought that would be a sweet ride for 30th Anniv. Dusty, but I have yet to see it and beginning to suspect Mattel may have been referring to the Hot Wheels special edition series. So I decided to pick up the traditional black Tumbler (which, by the way, ***SPOILER ALERT*** does not appear in the new film).

I LOVE action figure vehicles, or "action vehicles" for short. They absolutely enhance any action figure collection and are fun to play with! My favorite action vehicles are Batmobiles. There are a few that I like more than the others, but all of them are great fun! However, this 3.75" scale version fails miserably.

The first issue is the scale. It's under-sized even for a vehicle in the popular figure scale. I put it next to my 30th Anniv. VAMP MkII and it looked like a go-cart. The second issue, and one that is prevalent with nearly all Batmobile toys, is that it's a one-seater vehicle. Sure, there's no one else in the line besides Bane that could ride with Batman, but that shouldn't stop them from making a toy closer to the actual movie Batmobile. What's worse is the fact that Batman barely fits inside the damn thing. The lack of knee articulation doesn't help, but you really have to shove him in there to be able to close the lid.

Thirdly, aside from a narrow hatch on the roof that opens up to allow you to fit Batman inside the cockpit, this toy does nothing other than roll. No hidden missile launchers like the 2005 & 2008 5"-scale Tumblers. No "projectile" Batman like the Batpod-firing version also released in 2008 and used in the TDKR "The Bat" action vehicle. This is basically a glorified Hot Wheels toy scaled up a bit and molded in plastic.

I'd go as far as to say that if it had been a two-seater vehicle (like the actual Tumbler Batmobile), it would have fixed most of the problems I had with it. The toy would have been slightly larger and accomodate multiple figures. I can live without the cannons or pop-out-whatevers, but for what it is, it's just not worth the price. If I could pick this up on clearance for half price (or, preferably, less), I might grab it again. I returned this Batmobile and put the $20 to a lot better use.