It's Saturday and that means a new installment of "The Honeypot"! This week more Hot Wheels Batmobiles make their way into the Hive, albeith in a different scale and I add some highly-anticipated Transformers releases, too! 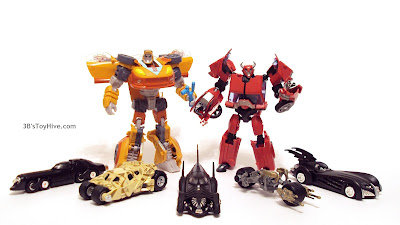 So a month or two before The Dark Knight Rises hit theaters, Mattel released a repackaged series of their 1:50 scale Bat-vehicles with a couple of new additions. I skipped them initially and thought they were all but clearanced out, but this past week I stumbled upon a couple of freshly opened cases at my local Walmart. That particular assortment featured the Batman Forever and Batman & Robin versions of the Batmobile along with the camouflaged Tumbler from Batman Begins and TDKR. At $8 apiece, they're a bit pricey, but I found the larger scale and detailed paint jobs are a lot nicer than what the standard 1:64 scale vehicles offer.

In one shot I picked up those three, plus the Bat-pod. I could have picked up the black Tumbler, too, but found a preorder on BBTS for a set that includes that plus the 1989 movie and Super Friends versions. I turned to eBay for the Batmissile from Batman Returns, which ironically I used to see ALL THE TIME at Toys R Us and never purchased. You should know that I love the Batmissile vehicle. It's a completely ludicrous contraption, but I fell in love with it's design as a 10-year-old boy watching the movie back in 1992. For nearly two decades the Batmissile Batmobile action vehicle from Kenner was my holy grail. A few years ago I was able to put one together from two different used vehicles I purchased on eBay. It's a bit worse for wear, but it's okay, considering a MIB version goes for over $200.

That one is a bit harder to display, in fact I have nearly all of these vehicle in the action figure scale, but I never have enough space to display them. This 1:50 scale is a nice alternative.

Finishing off my nice acquisitions are Cliffjumper from the Transformers: Prime "First Edition" series and Wheelie from the, initially, Asia-exclusive wave of Transformers: Generations. Both of these came to me via Ewan over at Chase Variant (he's in Singapore, if you're wondering) and I can't thank him enough. These are really great!

I was very excited to get into the Prime line when it was first released in the FE wave, however, I only ever found Starscream, Arcee and Bumblebee on the pegs. I held out hope for the rest of the wave, but they never appeared, or at least I never saw them. Therefore, I ended up with the "Prime - Robots in Disguise" Cliffjumper, which was a bit of a letdown. But forget that because now I have FE 'Jumper and he is awesome!

Wheelie is another great update to a classic character. He may not be a mini-bot anymore, but that doesn't bother me in the least. I love the "Reveal the Shield" Jazz mold and I think it's a great look for Wheelie. You can expect to see reviews of him and CJ soon.

That's all for this week, until next time, happy hunting!
Posted by 3B at 8:40 AM