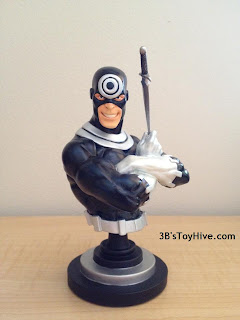 The Honeypot is back!

It's been six months or so since my last "Honeypot" entry and I don't know if you missed this feature or not, but I sure didn't miss having to write it. It became very tedious to keep track of all my purchases over the course of a month and after all that documentation I only had text to show for it. So I've regrouped and decided to post the Honeypot weekly (unless there aren't any new purchases), with a new format that includes pictures!

Let's jump ahead to see what goodies came into the Hive this week! 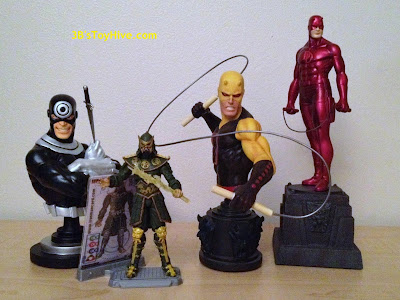 The past several months have inflicted "Marvel Madness" on my wallet with me finally caving-in and buying into Marvel Universe, but this week saw the emergence of a new facet to the madness: statues! I picked up some Bowen Designs statues/mini-busts and I'm hooked! Newly added to the Hive are the following Bowen items:

Prior to getting these three items, the only statues in my collection were two Batman figures from the Batman: Black and White statue series by DC Direct (seen here), the first of which was the Brian Bolland version. I just loved how that sculpt perfectly captured the Dark Knight. But way before it was released, there was one statue that peaked my curiousity and I really wanted to own it badly. That was Randy Bowen's Daredevil statue.

Unfortunately, I was never in a position to acquire one. Recently I visited the largest comics & collectibles store in South Florida, Tate's Comics, and noticed they had Bowen's DD statue on display, albeit a much smaller version. It was identical to the initial release, just on a small scale. They were asking $100 for it. I considered it, but ultimately decided I could find it cheaper online (thanks to my trusty iPhone!) and held off. I started looking on eBay and saw all the wonderful Daredevil items Bowen's produced over the years and that opened the flood gates. I bought all three of the statue/busts listed above within a day of each other from different eBay sellers. The first to arrive was the Bullseye bust. You can't have Daredevil on the shelf without Bullseye!

I also wanted a representation of ol' hornhead in his yellow, origin costume, the only one I had to-date was the crappy Hasbro Marvel Legends figure. Instead of buying the "original" version of the mini-statue, I opted for the mini-bust with his billy club cable twisting through the air.

I managed to snag a Mandarin figure off eBay, too, thus completing my Iron Man 2 comic series collection. Actually, I'm missing a couple of Iron Men, but I have all the villains now and I think I'm good. 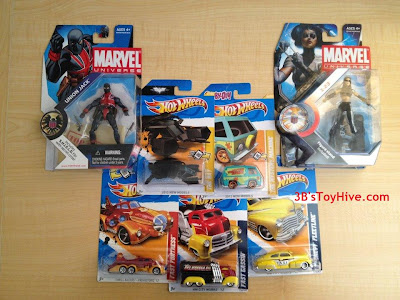 The second part of this week's Honeypot is mostly Hot Wheels with a couple of Marvel Universe finds. I went into the Target on the other side of town and found MU figures on sale for $7.99! There were plenty of wave 18 figures: Beast, Kraven & Beta Ray Bill, but I already had those. I was really hoping for some w19 finds, but no luck there. The only figure on the pegs that I didn't have and was kinda interested in was Union Jack. I see him all the time at my local TRU, but don't like him enough to pay regular price. At eight bucks, I figured "what the heck?" and scooped him up. I should have passed.

Also at that Target I finally, FINALLY, found the Hot Wheels "Mystery Machine" from Scooby-Doo. Over the past couple of years Mattel's released several "pop culture"-related vehicles in the 1:64 scale line. Aside from the various and ever-popular Batmobiles, they've released Ecto-1 from Ghostbusters, the custom GMC van from The A-Team, the DeLorean time machine from Back to the Future and Knight Rider's K.I.T.T.! I've managed to acquire all of those except for KITT. With that Hot Wheels find, I decided to try my luck at the TRU across the highway.

At TRU there was a Buy One, Get One FREE deal on all Hot Wheels toys. It was looking pretty barren, just the usual colorful assortment of vehicles, but digging through the standalone display I stumbled upon another treasure hunt item: the Bat from The Dark Knight Rises! I almost jumped for joy when I found it. Composing myself, I picked out the "Fast Gassin'" gasoline truck as my free item. The BOGO sale led to a stop at my local TRU store where I didn't find any more HTF-type Hot Wheels, but did come upon the completely ridiculous bomber-car pictured above. I snagged that one and the Fleetline taxi because it reminded me of the Thunder Cab vehicle from Kenner's The Shadow toy line.

At that store I also bought X-23. She isn't a character I particularly care for, but I love the black and grey X-Force costumes and I keep coming across her at that store. I had a gift card, so I finally purchased her and afterwards ordered the X-Force team set (Wolverine, Deadpool & Warpath) from Big Bad Toy Store. That set is currently sitting in my "Pile of Loot" until I acquire a sizable shipment of items. Hence why it's not pictured here.

That was the haul for this week. Next week I hope to have the new Bowen items I've ordered to "fill out" my Daredevil statue collection and maybe by then I'll have found some MU wave 19 figures!