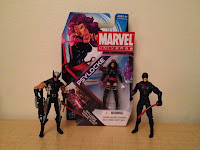 I'm back with another entry in "The Honeypot", but it may look familiar because all my new additions this week are from the same toy lines I featured last week. More Hot Wheels. More Marvel 3.75" figures. And more Bowen Designs statues!

Aside from the Hot Wheels, nearly all these items were purchased online, which serves to illustrate the sad state of action figures in my area. Hot Wheels... never would have imagined I'd be buying these this often at this point in my lift. So jump ahead to see what came in this week! 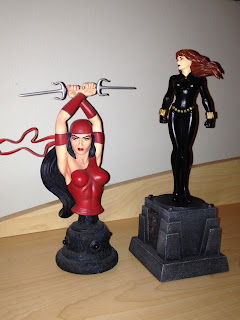 As you can see DC Universe Classics' absence at retail has contributed to my "Marvel Madness" extending into another week. Target still had Marvel Universe figures on sale, nothing new, but I decided to pick-up an extra Psylocke for an (eventual) custom X-Force version of Ms. Braddock. Although I ordered the X-Force team pack, I'm convinced that set's Wolverine is inaccurate and so picked up the single release to potentially mash-up and create a better version. Rounding out my MU purchases for the week is "Shadowland" Daredevil. I haven't read the Shadowland story and don't plan to, but I love the look of the outfit. However, this figure reminded me of why I didn't collect MU at the beginning. The basic body is just terrible. I'm glad Hasbro's created and integrated the new body style (seen on figures like "Greatest Battles" Daredevil & Bullseye, Steve Rogers and FF Spider-man) which has gone a long way to make this a must-have collector line.

I've been on a real Daredevil kick as of late. I picked up the "Greatest Battle" pack a couple of months back when I not only wanted him for my budding MU collection, but realized that I barely had any DD figures! That may not be exactly true, I have both the Hasbro ML versions and had one of the Spider-Man Classics figures for years until just recently selling it off on eBay. Looking beyond figures, I picked up a few Bowen DD items last week and continued this week with some prominent ladies in Matt Murdock's life: Elektra and Black Widow.

Between the DD, Bullseye and Elektra mini-busts, I'm noticing I really dig this format for statues. The waist-up, arms posed style of mini-busts delivers lots of emotion. I don't have plans to collect every mini-bust Bowen releases, but the Wrecking Crew set are four I would absolutely LOVE to add! 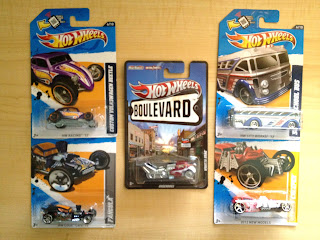 And finally we arrive at the Hot Wheels. No real "treasure" type finds, but I did pick up the "Minion Pig" from Angry Birds for my daughter. The cars I picked up are on the fantastical side of diecast vehicles. "Fangula" is perfect for Halloween, I just wish it was a larger to show off all the details in the sculpt and paint. The rest of the vehicles leaped out to me from the pegs at Target and Walmart. My favorite, though, has to be "Whatta Drag" from Hot Wheels' deluxe Boulevard line. That one cost $3.47 at Walmart and features some slightly nicer paint and rubber tires.

And that concludes this week's Honeypot. I'm still sitting on a "pile-of-loot" from BBTS and a couple of items are making their way across the globe to me courtesy of Ewan at Chase Variant, so watch for those in a future installment.

Until next time, happy huntin'!