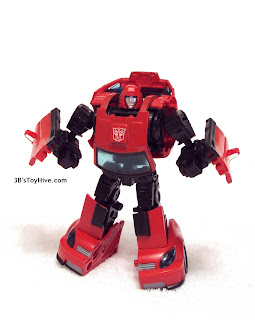 When I decided to collect modern versions of classic G1 Transformers characters I knew certain figures would be a pain in the butt, or just outright expensive to obtain. Some characters haven't received any "classics" love in the Universe Classic, Reveal the Shield or Generations lines. Some have been the subject of fantastic Third Party creations while others have seen official release with disappointing results. Case in point: Cliffjumper.

If you're familier with the Universe version of Cliffjumper, you'll know he's a cheap repaint of the Bumblebee from the same line. Hasbro couldn't even be bothered with creating a new head. Add to that the horrid paint deco and you have a figure that is in no way worth the $60-100 current after market prices. Eventually FansProject released a replacement head, however it was produced in such a limited quantity that you'd be hard pressed to find it for under $250. Thankfully, Beezleboss stepped in with their own version and after sourcing an extra "RTS" Bumblebee, I began work on what I call "Generations Cliffjumper". 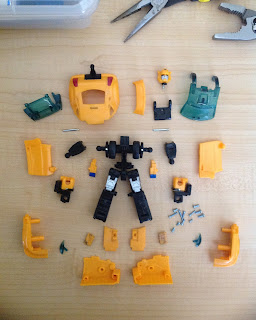 I'd like to mention that this custom was inspired by Jin Saotome's version which uses the same base with a War for Cybertron 'jumper's head.

Since Cliffjumper is red I had to paint all of the yellow parts on Bumblebee. I didn't want to have the figure red on the outside and yellow on the inside, so I had to take him apart completely. This was tedious, but not as difficult as I initially thought it would be. The photo above shows all the pieces that make up RTS 'bee. I also removed all the yellow paint on the windshield/interior piece, something that proved to be a mistake in hindsight.

As you can see that piece is made of transparent blue plastic and it was a MAJOR pain in the @$$ to paint. Also, the fact that door and hood panels close tightly when the figure is in vehicle mode required some sanding to keep the paint from rubbing off (which happened to me... a lot). 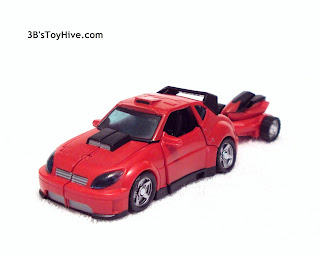 Although I didn't like the paint scheme on the Universe Cliff, I liked the idea of he and Bumblebee having different decos. Since my "classics" Bee is also the RTS version, I wanted a contrast between his racing stripes and a more solid red version of 'jumper. I decided to use black paint for some of the sculpted out details on the little sports coupe and also paint his hood scoop and spoiler in black. I think it gives him a bit of that custom street racing vibe without going overboard. I also used grey paint on his grills.

I debated (with myself) whether or not I should paint over the winsshield and headlights using glossy black to make them look reflective, but uniform. I opted to keep them translucent, though and I think it was for the best. The blue "glass" clashes a bit with the red body, but I guess it's alright looking. 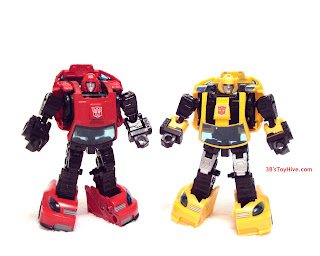 Another idea I picked up from Jin's custom was making the door and hood panels removable, giving Cliff & Bee a more G1-look. This was easy on Bee because you don't have to do anything other than yank the doors off and lift the hood panels from the outside first and the best part is you replace them the same way. On Cliffjumper, though, this meant sanding every edge the panels touch to keep them from rubbing the paint off.

Repro Labels provided the finishing touches on Cliffjumper in the form of the Autobot emblem on his chest, side view mirrors and license plate. Now, up ahead I go provide a mini-review of the Beezleboss head that helped transform (pun intended!) RTS Bumblebee into my Gen. Cliffjumper! 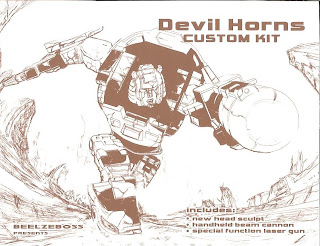 Beezleboss is one of the (I assume) newer Third Party transforming robot companies to spring up and so far most of their focus has been on delivering replacement heads and weapons for existing official products. The Devil Horns kit is actually one of two BeezleBoss products I own, the other being the Goldbug upgrade "Growing Pains" kit (I'll make sure to review that eventually, but you can see it here in the meantime). 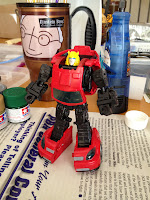 The Devil Horns kit was released in two colors: red and yellow. You may be wondering why I chose to use the yellow version for my Cliffjumper custom. Well, for starters I like the darker weapons included in this set and I'd probably have to repaint the red head to match the red I used for the rest of the figure anyway.

The head is held together by a screw, so removing it allows you to easily break the head down into it's three parts. This helps when repainting the "helmet" portions without having to worry about messing up the face. When reassembled the head snaps on to the existing neck peg without a problem. 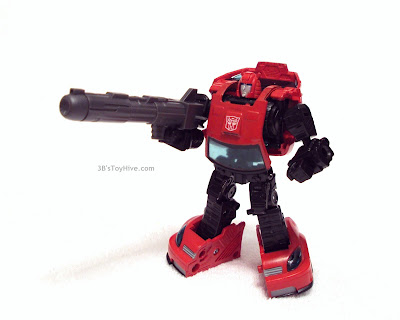 Besides the head, the Devil Horns kit includes two weapons for your figure. There's a comically large, bazooka-type weapon very similar to the one Cliff was known for using in the original cartoon series and a smaller blaster, too. Both features simplistic sculpts, but fit nicely into the figures hands.

I believe this set was released prior to the "Growing Pains" kit and although it doesn't quite match the quality on that release, it still looks and works great on the classics Bumblebee mold. I don't know how readily available it is now, but I ordered mine from Robot Kingdom for $22.90 plus shipping (it shipped with some other items, so it wasn't too bad). BBTS had them for around $30 before shipping. Sure, it's a premium price for a head and two weapons, but considering other Third Party items (and the alternative), it's not horribly expensive.

Last I read Beezleboss was working on a new head upgrade for Generations Red Alert, no word on a release date, but that's another one I'd like to pick-up.