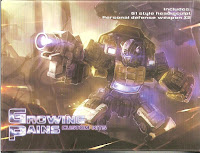 Last week I featured the Cliffjumper custom I created using Beezleboss' Devil Horns kit. Today I'm taking a look at another one of their upgrades, this one serving to transform Takara's gold-finished Bumblebee figure from the United line into a modern version of his upgraded G1 self, Goldbug.

I didn't have a United Bumblebee and wasn't willing to pay upwards of $60 to obtain one (undoubtly in higher demand due to the release of this kit) and a regular Universe Bee just wouldn't live up to the GOLDbug moniker, so I settled on the next best thing...

That "next best thing" was Takara's version of War for Cybertron Bumblebee (reviewed on the Hive by Novelty), which was also released in the United line. Although Hasbro (and by extenstion, Takara) goes to great lengths to reuse molds whenever possible, I like to add as much diversity to my Transformers collection as I can, so I wasn't too bummed when I couldn't score a United Bumblebee which resuses the same mold as Hasbro's Universe and "Reveal the Shield" (which is the one I have) versions. It's also the base for Cliffjumper.
The "Growing Pains" kit consists of the Goldbug head and two blaster pistols. Like the "Devil Horns" head, this one consists of three parts held together by a single screw. You don't have to disassemble the head to fit it on to the WFC Bumblebee neck peg. The peg is sturdy enough to stay intact while you yank the old mug off the figure and snap in the new one, however, I wouldn't recommend swapping them frequently as it could cause some breakage. 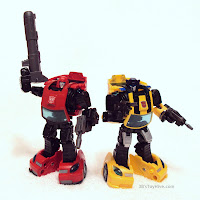 Once in place, the new Goldbug head fits nicely and doesn't hinder the transformation process at all. It fits on the classics Bumblebee mode the same way. I may not have the gold United version, but I tested it out my RTS 'Bee and it still looks pretty neat.

I also picked up Renderform's version of Goldbug's head, the Gold Scout kit, in black for a spare RTS Bumblebee figure I have. I think that one will look better on the RTS mold, but lately I've been thinking of repurposing it for a different character.

The blasters are identical but feature a unique sculpt. They're intended for the classics Bee mold and because the WFC figure features those half-opened hands, they don't exactly fit properly

To me, WFC Bumblee is a perfect base for Goldbug because "cybertron modes" were more prevalent in the third and "fourth" seasons of the G1 show. I ordered United WFC Bumblee along with the "Growing Pains" kit from Big Bad Toy Store where at $30 a piece plus shipping equaled roughly what a gold Bumblebee would cost. 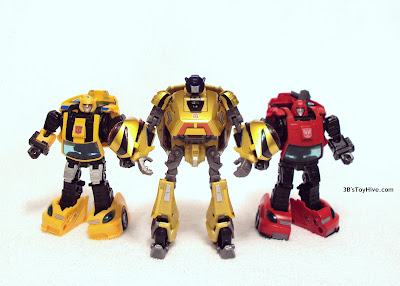 All in all, the quality on the Growing Pains kit is top-notch, a nice improvement over the Devil Horns kit and I can't wait to get the upcoming Red Alert/Sideswipe upgrade kit, "Heroic Duo", which I've already preordered.