I started rearranging my display in late September and was almost done before I realized we're heading into October and Halloween. Dammit! So I decided to change it up and include some "spooky" toys for a more appropriate display.

Of course, I don't have enough ghost/monster toys to fill up all my displays, so there are still plenty of superhero items around the room. Let's jump to it! 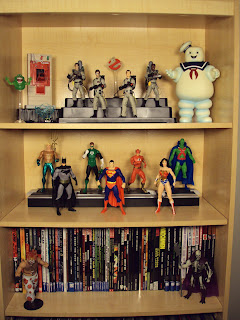 My original plan included my Transformers Prime collection in the main shelf, but after setting them up I was really disappointed. The newer "Robots in Disguise" series has very minimal paint. Repro Labels has come up with some great kits to correct most of the figures, the most in-need being Ratchet and Knock Out. I haven't ordered any of them, yet, and I haven't finished my paintwork on Optimus and Arcee, so these look terrible on the shelf.

Well Halloween gave me an excuse to take them down and put up a new display which as you can see focuses on the Ghostbusters. I went for a mix of the two films by including Mr. Stay-Puft and Ray & Winston packing the slime blowers. It's not an intricate display, but different from my previous GB display.

I dug my Alex Ross Justice figures out of the storage bin and had them take up the second shelf. This line doesn't feature the best articulation, but the sculpts are amazing! Initially I had all the figures without display stands, however the Flash wasn't cooperating. He's unfortunately pre-posed and nearly impossible to display without a stand. I couldn't have him as the only one with a stand, so Aquaman, GL & Martian Manhunter got their stands, too.

Guarding the graphic novels this month are Sweet Tooth from the Twisted Metal videogames and Masters of Universe Classics' Scareglow, which is one of my favorite MotUC figures. I didn't include his trademark neon green scythe or the Grayskull reliquary because I wanted him to be on display without the backstory or tie-in to the larger Masters mythology. Sweet Tooth is just creepy as hell... 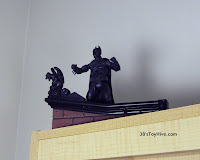 At the very top of the bookcase I'm displaying the Movie Masters "Ghoul" Batman for the first time ever. He's borrowing the display base from Young Justice Robin (arguably the best part of the toy) and looking out over "the city" ready to spread fear.

To lighten the mood up there a bit, Bowen Designs' Cyclops Mini-Bust sits across, ready to put a hurting to a sentinel or other baddie! 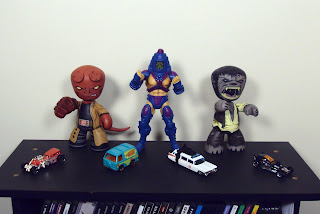 I cleared out the Hot Wheels Batmobiles from the DVD case and brought in some relevant HW cars, including the Mystery Machine from Scooby-Doo and the Ghostbusters famous ride, Ecto-1! This was also a perfect spot for my HellBoy and Wolfman Mez-Itz and I thought throwing in Man-E-Faces (with his monster face, of course) was kinda funny. 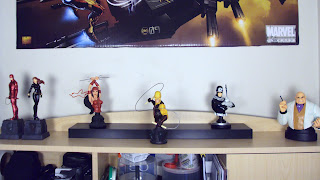 The hutch over my computer desk is occupied by my Daredevil by Bowen mini-busts and statues. From left to right we have: "Classic" Daredevil, Black Widow, Elektra, "Original" DD, Bullseye and the Kingpin. I was very tempted to pick up a Gladiator bust (not this one, but this one) because his mini-bust looks amazing! I ultimately decided against it (for now) because he's a character I'm not too familiar with and unless I found an amazing deal on the bust, it wouldn't be worth to have him in storage for the possible one time a year I'd display him with other Daredevil busts.

I think I'm done with mini-busts this year, though. Next year I would like to collect more of the X-Men-related busts and eventually have a nice team going.

Capping off this edition of "CoD" are the X-Men and Frank Miller's Batman taking up the wall shelves opposite my desk. I can't tell you how much I love that Batman statue. I was really excited to get the Brian Bolland version (see last "CoD" post) and it was my favorite version of Batman for a long time, but Miller's version of Batman is just menacing. He's huge and grim and I love it! That's why he stuck around for a couple more months.

After expanding my Marvel Universe X-Men team last month, they couldn't be relegated to one small shelf. This month they take over the largest wall shelf, posed for some ass-kicking! Left to right: Colossus, Lockheed, Shadow Cat, Beast, Cyclops, Storm, Wolverine, Havok, Iceman, Psylocke and Gambit.

That's 10 figures, not counting Lockheed, and I still want to add Archangel, Rogue, Emma Frost, Jubilee and Professor X. I'm curious to see how I'll display that massive team when it's completed.

I think that's about it for October. November is coming up very quickly and I already have a few ideas of what's going on the shelves. Tune in next time and remember to keep your displays dust-free!