This week's assignment for the League of Extraordinary Bloggers is:

Write a “State of the Site” for your web site. How’s it going? What exciting things have happened this past year? Where do you want your site to be in a year’s time?

Well, I think the time is just right for this topic. There have been lots of changes at 3B's Toy Hive, both on screen and behind the scenes. Click ahead and get I'll give you the rundown of how it's going! 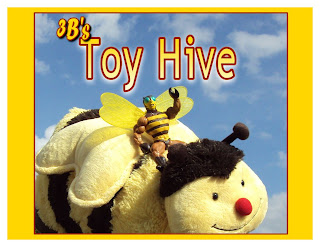 First, a brief history of the Hive.

In 2009, around Summer (I think), I became an avid reader of It's All True.net and the long-defunct Articulated Discussion. Those websites were my introduction into a community of people my age (and older) that absolutely loved action figures and toys and actively collected them. Up until that point I had a small collection of toys. I had all the Batman Begins action figures, some stuff from Superman Returns and was nearly finished collecting Toy Biz's DC Super Heroes line. I had a few Transformers items: commemorative G1 Optimus Prime, 2007 movie leader-class Prime and some figures from the Energon series. And Batmobiles. Lots of Batmobiles.

But then I discovered Mattel's DC Universe Classics and I was engrossed by them. I bought up as many as I could. Became aware of New York Toy Fair and Comic Cons and more websites talking about toys, etc. In 2010, Mattel became the producer of WWE action figures. New lines for me to collect. However, these toys weren't being reviewed as often as other comic & movie-based lines on the websites I followed. In May of 2010 I decided to create my own blog and review the toys I collected.

"Killer B Creations" was born. A short while later it was renamed to "Killer B Hive" and the name lasted until I decided to register my own domain name and changed it once more to it's current name. The first person to extend a hand and invite me to guest blog was Novelty Nostalgia of Toy A Day. That led to networking with guys like Lemonjuice McGee (originally of Lemonjuice McGee's Hobotastic Toy Reviews and later MTV Geek!) and Chase Variant's Ewan, a.k.a. SirDragonBane.

So over the past few years I've written over 150 toy reviews, a few guest reviews at other blogs, created a bunch of figure comics and traded thoughts with people from all over the world. I never planned to compete with the big toy reviewers. I haven't hounded companies for samples and haven't kissed up to any, either (at least, not intentionally). The economy and budget cuts at work have certainly influenced my buying habits.

I think that as collectors, we sometimes lose track of what's most pertinent to our collections. It happened to me with DCUC and eventually with WWE figures. I decided I'm only going to collect the stuff I love and I'm going to try my best to avoid "impulse" buys. In some ways toy companies have made that easier for us.

Anyway, over the past year I've truly only covered things I've enjoyed. Sure there's been the occasional review of disappointing items, but I think it's good to include those, too. Not everything is a sparkly diamond and to prove it I added a new type of review this year, "Return'd". Just because you bought a piece of junk doesn't mean you have to keep it. Return'd covers items I've sent back to the store for a refund (more often than not, I exchange it for something else, but... still).

As far as the Hive goes, specifically the website, it seems to be doing great! I've tried to diversify the site a bit with the kind of content I include. This year I added "The Honeypot" where I rundown my toy purchases and it's become a weekly feature! I've stepped outside the toy world with movie reviews and topics from the League of Extraordinary Bloggers. The LoEB definitely adds a lot of fun to the blogging experience. It's given me the oppurtunity to pull back the curtain a bit and share some true-life experiences and creativity. It's nice to just let the mind stretch out every now and then.

I've also focused more time on enjoying the toys I buy, whether it be playing around with them on my desk, finding new ways to pose them on my shelves or including a random pic on Facebook or Twitter. It's nice to hold them and not just stick 'em in a box or start thinking about writing a review. And I love including my display in the (kind of) monthly, "Currently on Display".

I'm excited about the future of the Hive. For the first time in a while I'm having fun writing and posting again and I hope that's coming through in my recent entries. I appreciate everyone who stops by and reads my rantings. And a huge "thank you" to those fellow bloggers who've invited me on to their blogs via posts or links!

From around the League!
Happy first birthday to Rediscover the '80s!

The LoEB: not only does it revitalize bloggers, it creates new ones! Goodwell Hunting 4 Geeks.

Find out how to get free beer at Monster Cafe!

Random Nerdness breaks it down for us.

Blogging enhances collecting for The Man Who Stares at Toys!

Some interesting stats at JoMi Toys!