I tried to have this post up last Friday, but time wasn't on my side. I was busy prepping for my trip to Orlando, specifically Lake Buena Vista, this past weekend where the family and I attended the 2012 International Food and Wine Festival at Epcot in the Walt Disney World resort. It was great, but way too many people (and by people I mean drunken adults making asses of themselves) and we'll have to make sure to make alternate arrangements for the children if we decide to return.

So anyway, I thought this would be a great time to look over some of the reveals from two recent events: New York Comic Con and Ringside Fest.

NYCC 2012
I think most of the reveals at NYCC were overshadowed by the news surrounding that dollhouse for that guy with the sword and green lion. All kidding aside, I think it's great that they're trying to get that made for Masters of the Universe fans. I won't be preordering one, though. My disdain for that website and the-company-that-runs-it aside, I'm just not a big enough fan of MotU to throw that kind of money down. But I certainly wish the project the best of luck and you can follow it's progress at the link above.

I don't feel there was a lot of reveals coming out of NYCC. Mattel trodded out their usual three or four new DCUC figures and a couple of MotU items, but I was most interested in their WWE reveals of which there were none. Of course that's because they held those off until Ringside Fest 2012, more on that later. 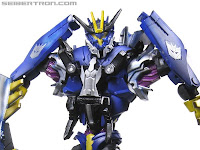 Hasbro unveiled the next evolution for their Transformers Prime series, "Beast Hunters" (see Seibertron.com's coverage). Apparently that will be the tagline for the show's third season and will introduce us to the Predacons, but they won't resemble the Predacons we know and love. These new beasties will be ancient Cybertronian lifeforms, or something, and Predaking will be the leader(?).

Most of the toys in the "Beast Hunters" line will be redecos and slight remolds of previous "Prime - Robots in Disguise" figures. I'm thinking these will be an easy pass, but that new Soundwave will include a deatachable Ravage instead of the original Laserbeak. I may have to buy that one just to get that robotic jaguar. 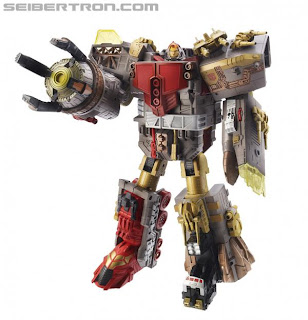 What I'm most excited for is a new "Platinum Edition" Omega Supreme! He's made from the old Energon release, but features a new head, right arm claw and a G1-inspired color scheme. OS is my favorite "city-sized" Transformer and I had all but accepted the fact that I would probably never have a "classics" version of him in my collection. There would be no 'bot to stop Devastator from destroying my Autobot forces...

Then this craziness came out of nowhere. I enjoy a lot of third party items, but call me crazy, I think $300 for a company's first release is asking a helluva lot. I mean, sure, I ponied up $100 for TFC Toys' first Hercules release, Exgraver, but I'd rather gamble one c-note instead of three plus. And we should remember that not every third party company is a TFC or FansProject, either. I learned that lesson fairly quickly when I purchased Impossible Toys' Valkyrie last year and it seems like many are learning it now with this unofficial Bumblebee released recently.

Anyway, Hasbro's PE Omega Supreme will be close enough to G1 to fit the bill and I'm looking forward to adding him to my collection. They're also releasing a redeco'd Energon Optimus Prime, also in a G1 color scheme, but I had the original toy and it was really goofy looking. I'll admit the G1 colors do improve him a bit, and I didn't know that mold could interact with the Omega Supreme figure, so that may sway my thoughts on him. I'll have to wait and see, though.

Ringside Fest 2012
Mattel delivered with lots of WWE reveals at this year's Ringside Fest. I won't go into detail on evertying they showed, but you can find pics on all the figures via WrestlingFigs.com (part 1 and part 2). Instead I'll just write a coupld of bullet points on the things that interested me the most.

• ...and he comes with the European Title!

• Sculpted/painted t-shirts in the Basic line

• Why is Mattel releasing a UFC Lesnar?!

Those are the main points that stood out to me. I have to say it's a lot less than what we've seen in years past, but that has a lot to do with the demise of "Entrance Greats", "Defining Moments" and apparently "Legends". The good news for "Legends" is that they'll still be incorporated in the Elite Flashback category. I don't know what the current status of Elite is, though. My local stores haven't restocked any of the newer waves. I'm sure the radical price increases over the last year is contributing to this, but I hope they can still get them out there because RSC pricing is ridiculous.

I also wanted to share this tidbit from one of Mattel's recent "Ask Matty" sessions, this one appearing at The Fwoosh a few days ago. Given the current situation with Elite figures in my area, I think I'll be glad to order Miss Elizabeth from "that website" and avoid the headaches. Would I like to see more Elite Flasbacks there, too? Short answer: Yes. Do I want Mattel to base it on a subscription? Absolutely not.

I'd like to take a quick moment to thank Hive reader, Cody B., for providing some updated information on the next few waves of Elite figures and I've revised the checklist to reflect that. Thank you, Cody!

And finally, I received my order of RSC exclusives I placed last week before leaving to Orlando and you can look forward to those being reviewed in the coming days. First up: the Texas Rattlesnake, Stone Cold Steve Austin!