We've reached then end of the first week in October and the "gets" are off to a great start! This week I finally found some Marvel Universe wave 19 figures, a second Vehicon trooper for my Transformers: Prime collection, a hard to find (at retail prices, anyway) Joe figure and a couple more Marvel mini-busts from Bowen! 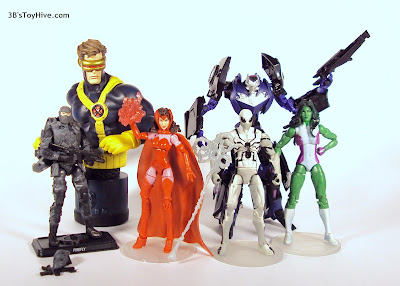 First up, in my endeavours to acquire some Marvel statues I've learned I really, REALLY enjoy the mini-busts by Bowen Designs. While I was only seeking to have a nice collection of Daredevil-related items, I stumbled upon a sweet deal on eBay for a '90s style Cyclops. Of course, now I'm toying with the idea of collecting X-Men mini-busts. There are a lot of (expensive) things coming down the pike and hunting down some of the older X-busts will be quite pricey, but it's probably something I'll focus on throughout 2013. 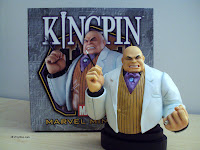 Speaking of Daredevil, I rounded out my Bowen-designed collection with the biggest baddie of them all, the Kingpin (he was delivered just about an hour after I put away my lighting equipment, hence the reason his not in the group shot). He joins the DD & Black Widow small scale statues and "Origin" DD, Elektra and Bullseye mini-busts to round out my collection. Any word of a MU Kingpin, yet? 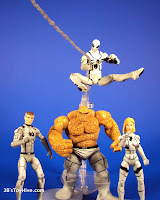 In more Marvel pick-ups, I finally stumbled upon a few MU wave 19 figures! Up until now, I only had the new deco Punisher, which I picked up from BBTS back in August. On Wednesday, a visit to my local TRU yielded She-Hulk and FF Spidey (finally completing that team). They were the only two w19 figures on the pegs and no extras either. It was one of each. The next day a stop at the uptown TRU nabbed me Scarlet Witch. I wasn't exactly excited for her, but again, she was the last one at that store so I didn't hesitate. Now I just need to find Kang and I'm done with this wave. I'm not sure about Bagged Spider-Man, though. I'll have to see him in person before I make a decision.

Last Sunday, on my way home from work, my girlfriend asked me stop at CVS and pick up some medicine for my daughter who was feeling "sicky-poo". So of course, I did, and while there decided to check out the toy aisle. To my surprise I found Firefly from the "Pursuit of Cobra" series. The package was quite beat up, possible the victim of a botched attempted theft because the bubble was coming off the card along the bottom edge. I inspected it closely and determined there was nothing missing to I took him over to the checkout line... along with some cough medicine. 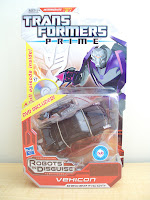 Finally, a lunch break trip to Walmart led me to my second Prime Vehicon, which has eluded me for several months now. I picked up the first one back in April or May at Kmart for $13.99, which I complained was too expensive. Talk about speaking too soon. This one cost me $15.97 because aside from the recent price increase, it includes a DVD. I'm sure it's Hasbro's way of easying us into another price hike. Bastards.

That rounds out my toy pick-ups for this week. I few non-toy-related items, but nonetheless relevant, were: The Avengers Blu-Ray/DVD, two Vertigo gold foil trading cards and a spice rack. I wasn't sure which version of Avengers I would pick-up, but due to budget constraints I decided on the BR/DVD combo pack which cost $22.99 (plus tax) at Target. I only saw the movie once and that was in theaters, so I'm excited to view it again. Probably doing that tonight. 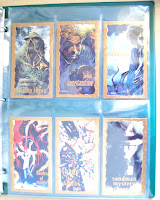 I was only missing two of the chase cards (John Constantine and "Books of Magic") from the Vertigo trading card series by SkyBox, waiting for the right price to pop up on eBay. I found them from different sellers, at decent prices after shipping, so I decided to finish the set off. I also ordered the last few cards I was missing in the Batman "Master Series", Artist's Proof set. For those unaware, the Artist's Proof set mirrors the base set, but features the artist's signature in gold foil on the front of the card and a note from the artist on the back regarding the card image. I forget what the ratio of Artist's Proof to packs is, but it's impossible to find an entire set in one (or even three) sealed boxes. I've literally been culling them for YEARS and finally narrowed it down to five cards which I was able to purchase from one seller on eBay. Those should arrive in time for next week's "The Honeypot."

The last item I picked up this week was a new spice rack. You may be asking, "what does that have to do with toys?" Well, I use a spice rack I purchased about a year and a half ago for my main display area, but while I was at Target this week I stumbled upon the kitchen accessory aisle. I picked up this rack which looked very similar to the one I have, but features a taller first step. Upon closer inspection I learned it was an extending rack. It can actually extend to the width of my display case, so I immediately bought it. I still need to paint it black, but for $13 I think it's a great little display solution.

That is it for this week! Come back next week when I inch ever closer to completing the entire The Transformers, "G1", season 1 cast in classics style!