This week's haul is heavy (really heavy!) on the transforming robots with a few comic & movie-based toys tossed in for good measure! Hit the "SWARM" button and see what all filled the pot during the second week of October! 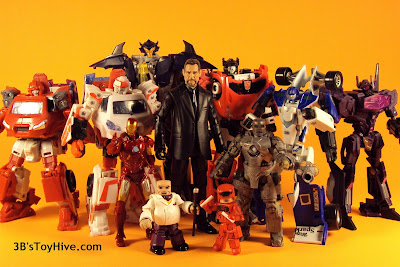 Last week I decided it was time to finish up my "G1" season 1 Autobot team (at least from what's currently available) and pick up the last four figures I was missing: Ratchet, Ironhide, Sideswipe & Mirage. The first three showed up last weekend. I already had the Universe Ironhide, but I always wanted the Henkei version, which features a much nicer deco. However, my hunt was for a classics Ratchet, it just so happens I found a lot featuring Universe Ratchet & Henkei Ironhide. The Ratchet/IH mold is far from the best in the line, but I do like how the characters are represented, I only wish they were slightly bigger than the other deluxe size figures.

Initially I planned to customize a spare Generations Red Alert into Sideswipe, but after disassembling him and having him sit in pieces for over six months, I decided to take the lazier (but pricier) route and just buy one outright. Before winning this auction I'd lost three 'swipes on eBay. This seller had him listed for $59.99 with free shipping. I offered him $45, he declined. I offered $50 and he took it. Not the best deal, but I was tired of playing the bidding game.

Mirage showed up later in the week. At $35 shipped, I think he was the best deal out of the four TFs I found on eBay. He has a very lanky look to him, a stark contrast from the old G1 figure I used to have, but I love it! He stands out nicely when next to the beefier bots. I so cannot wait to put up a new classics G1 display... tentatively scheduled for December.

I also found a Mark I movie series Iron Man last weekend while on a beer run at an unlikely place. I was at a park for my niece's 4th birthday and my brother asked me to pick up some beer. I drove to a nearby Navarro Discount Pharmacy which for those who are unfamiliar is something like a super-sized CVS pharmacy. They didn't have any cold beer, but on my way out I "happened" to pass through the toy aisle and spotted some IM2 figures. I looked through and found the movie version of the Mk1. Now, when the IM2 figures first showed up, I was only interested in the comic versions, always skipping the film toys. Of course, now that they're no longer in stores, clogging up shelves, I decided I want to collect the various on-screen armors, too. So to-date I have Mark: I, V, VI and VII.

Speaking of the Mk VII... I already had the "Fusion Armor" version of the suit, but much like the rest of The Avengers toy line, it lacks a lot of the articulation found in Marvel's previous 3.75" movie lines. But in a somewhat surprising move, Hasbro released another Iron Man (that's not the surprising part...) in wave 4 dubbed "Shatterblaster" and including additional leg articulation. It doesn't make a huge difference because the added points are only in the legs, but I rather have more articulation than less in this case. He also has a nicer color on his ARC reactor, but it's not detailed like the one on the IM2 figures. Although both figures use the same head sculpt, the SB figure loses the silver paint details on the helmet (between the "faceplate" and "helmet") the FA version has. The great thing is that the heads pop off easily and you can just swap 'em around.

SB Iron Man was part of the largest toy haul in a single day this week. On Friday I had a morning appointment which had me up and about early on my day off. When I was done with the appt. I headed to the "uptown" Toys R Us where I found Ra's al Ghul and the final piece to complete my Movie Masters Batsignal. The downside he was priced at $20.99 before tax. Fearing I wouldn't find him anywhere else, I begrudgingly headed to the checkout with him in hand. Once there, the cashier asked if I was interested in applying for the TRU credit card and if I did I'd get 15% off all my purchases for the day. I said "sure", figuring I'd get him a bit cheaper and I could do some early Christmas shopping while I was out.

That led to a TRU-hopping excursion for the rest of the morning (I have three within a fifteen mile radius, 4 once they reopen the one near my job). At the second TRU I found a bunch of My Little Pony toys for my daughter and nieces along with Dreadwing, Shockwave, SB Iron Man and Mini-Mates Daredevil & Kingpin for myself. At my third and final TRU stop I was plesantly surprised to find this: 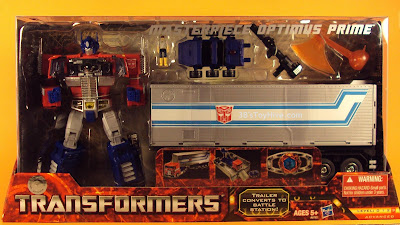 My first-ever TF Masterpiece purchase! I remember when the first MP Prime was readily available in stores. I thought it would be a great item to own, but never pulled the trigger because he didn't have a trailer. Well, the newest version is significantly smaller than the first release and comes with his trademark trailer PLUS a mini Spike figure! I haven't opened him up, yet, but I'm thinking he'll be a long-term display piece at the Hive.

And finally, as if all that wasn't enough for one day, I arrived home to find Mirage sitting in my mailbox. I have quite a few TF figures I'm planning to upgrade with Repro Labels, which I will be doing before putting the G1 team on display.

This week's Honeypot (in order of arrival):