I'm postponing this week's edition of "The Honeypot" because I only picked up two items and felt it would make for a pitiful group shot. Instead I'm jumping right into a review of one of those purchases, Swerve from the newly released (at least in my area) Toys-R-Us exclusive "GDO" series. Just like fellow GDO release, Wheelie, Swerve is a remold of a previous release, in this case, Kup (masterfully reviewed at It's All True last year).

You may notice some differences in the Kup figure pictured below, those are mostly attributed to modifications I've made with Repro Labels, but also includes the IDW-inspired iGear head and painted wheels. So don't freak out if you think you missed a better version of Kup on shelves. It's all "after-market" upgrades! Now, on to Swerve! 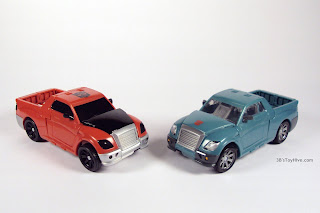 First up, Swerve's alt-mode is identical to Kup's non-descript pickup mode. He's mostly red, but has a somewhat obnoxiously glossy black hood. Why did they paint his hood black? It could be an homage to his "G1" toy, which featured a black hood scoop, but that's kind of reaching. Beats me why they did it, but it does give him that carbon-fiber, illegal street racing look. I just wish it wasn't so glossy.

The trickiest part of Swerve's transformation is the flipping torso/hood & roof bit. Once you get the hang of that you're good because everything else is pretty intuitive. Swerve's robot mode is identical to Kup's, minus a new head, however the new head was apparently part of the original Kup mold, saved as an alternate for a future release.

I don't know if Hasbro always planned to use it as Swerve, but it looks nice if a bit off the mark. I prefer him to have more of an IDW look with a visor over his eyes. I'm sure some third party group will try to make a new head, but I'm going to try to craft my own. I'm just not sure how, yet.

While Hasbro stayed mostly true to his G1 color scheme for his vehicle mode, they took some liberties in his robot form. There's a lot less white on the body and more black and grey. Significantly different from his IDW version, too. I have to admit, though, that I actually like this deco better. To be accurate to those other versions, he'd have to have all red arms and legs and with the truck kibble on those appendages, you'd end up "losing" them when looking at him. 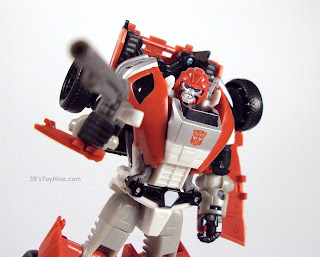 Just like pre-upgrade Kup (I also picked up the iGear weapons for him), Swerve includes one accessory: a laser musket blaster rifle that doubles as one of his exhaust pipes when in truck mode (the other is molded into the leg).

It's molded in a slightly lighter shade of grey than Kup's weapon is. There's plenty of detail on it and features a 3mm clip to connect to Swerve's back/truck roof. The only real problem I have with it is the color. See, the other exhaust pipe, the one molded on to the toy, is white. When you store the rifle underneath the truck Swerve has different colored exhausts! That just looks stupid, so my Swerve's only going to have only one exhaust pipe. 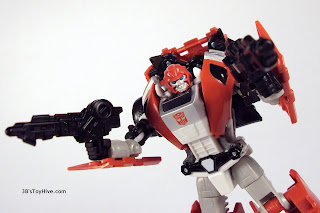 I may try to modify his blaster and give it more of a sawed-off shotgun look to it by shortening the barrel and removing the stock. Just one more thing for the old "to-do" list. Alternatively, I gave him the black weapons from the Renderform Gold Scout kit I picked up a few months back. I think they look a lot better for Swerve, too.

Swerve was a mini-bot in G1 and just like Wheelie, he became a Deluxe-sized figure in the GDO series. That doesn't bother me in the least. I don't care much for mini-bots, unless their alt-mode is supposed to be smaller than the deluxe-sized vehicles. If he were to transform into a scooter or go-cart, then I wouldn't be bothered with having him as a Scout-sized or similar mini-bot. 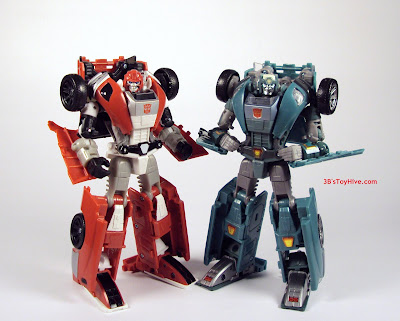 Swerve proved to be a very nice release. I found him last Thursday at my local TRU (where deluxe TFs are still $14.99) along with the rest of the wave. It seems the US packouts include two of each figure per case. I already had Wheelie thanks to Ewan, but had no interest in Springer or Cliffjumper. Swerve may not have received the best deco, but he's a cool figure nonetheless. If you like "Generations" Kup, you should be happy with Swerve and have another member of the Lost Light!