In today's review I'm taking a look at Wheelie from the Transformers: Generations line. He's part of a series that was originally going to be an Asian market exclusive (referred to as the "GDO" series), but was eventually picked up as a Toys R Us exclusive here in the States. Now, if you're expecting me to come up with clever rhymes for this review, you're out of luck. However, you can refer to Wheelie's TF Wiki entry which is entirely written in rhyme. I can't gaurantee you won't go insane after reading it, though, so proceed at your own risk.

Read on to find out why I added Wheelie to my collection! 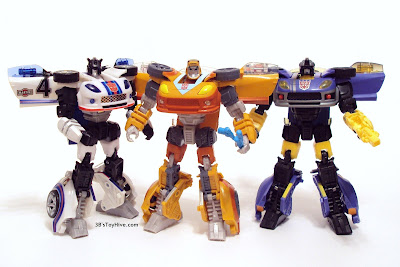 It seems to me that Wheelie used to be generally despised and considered a Jar Jar Binks-type within the pantheon of Transformers characters. I never cared for him personally, but I do consider him necessary since he was part of Rodimus' team during the final half of the "G1" cartoon along with Kup, Ultra Magnus, Blurr, Springer and Arcee. In recent years his popularity has grown apparently due to his Transformers: Spotlight appearance, written by the legendary Simon Furman.

For the purposes of this review I just read that issue (Comixology is VERY convenient, BTW) to see what all the hoopla was about and it's actually a really great story, going as far as to explain the reason for Wheelie's speech pattern. Like much of the third season characters, Wheelie hasn't received many toys (Click here to jump directly to the history of Wheelie toys on his TF Wiki entry).

The lastest release brings his total to three official releases. I say official because there is an unlicensed, "Third Party" version available, reviewed by Phil Reed during a guest stint at It's All True. I don't own that one, but it looks like a neat figure. It's very close to the IDW style for Wheelie, but misses that mark a bit. I think it works better in a vintage G1 collection.

"Generations" Wheelie is built on the "Reveal the Shield" Jazz mold which is a great update to Optimus Prime's first lieutenant. If there is a downside to that mold it is that it's a bit too tall in robot mode so I understand why some fans may be turned off by a Wheelie using that body. However, I really like this mold, it's easily one of my favorites in the "classics" lines, and was happy to see this up-sized Wheelie.

In vehicle mode, Wheelie is no longer a Cybertonian car like he was in the cartoon. Like his mold-mate Jazz he turns into an Earth-based sports coupe. A common trait among season 3 characters is their unique color palettes. I assume the show creators (and certainly, Hasbro, too) wanted to differentiate the new characters from the old cast by offering up, not only new alt modes, but different colors two, avoiding the usual primary colors as much as possible. It's very similar to what Alan Moore and Dave Gibbons did when they created Watchmen that same year.

Wheelie ended up with an orange color palette, giving him a very distinct look from the other Autobots. The Generations figure delivers the same, off-beat coloring. He's mostly molded in the necessary colors, with very minimal paint apps, which seems to be the standard for action figures nowadays.

Transformation is straight-forward, the trickier bits can be lining up the arms correctly when converting to vehicle mode and sometimes the legs don't lock up against the roof easily, but these are very minor issues. Once transformed, the vehicle is solid. In robot mode the chest/vehicle's front end tends to pop up, depending on how you hold the figure.

Wheelie's light in the accessories department, nothing new for the line, but he does get a really nice one: his trademark slingshot! It's molded with an additional handle coming off one side so you can turn it and have him hold it like a pistol. There's no actual sling portion, but I'm not sure how Hasbro would have pulled it off anyway. The slingshot replaces the collapsing blaster originally included with this mold (seen with Jazz and other mold-mates like "Shattered Glass" Treadshot), but you can still store it the same way behind the front bumper. 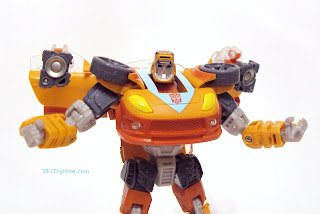 He also retains the fold out speakers hidden behind the door panels. They don't make much sense for Wheelie, but I like to think he's in charge of "morning announcements" and uses them as his P.A. system when out on the field. Rhyming news bulletins...

Although the GDO series is already hitting the States, I have yet to see them in my area. Like I mentioned in last week's edition of "The Honeypot", Ewan of Chase Variant fame was nice enough to track down a Wheelie for me and ship him over.

I'm really glad Wheelie was part of this series, which seems to be the last to offer full-sized, Deluxe figures as Hasbro's newer releases, specifically the Prime "Robots in Disguise" and Fall of Cybertron series have opted for a significantly smaller size Deluxe, but with a higher price point. I was so excited for a new Shockwave figure... until I saw him in-store. Goodness, he's tiny. I still have hopes for the FoC Voyager series which will feature a new Soundwave, Grimlock and Blaster. Hopefully those figures, sure to be smaller when compared to older Voyagers, will still have enough mass to look larger than the old Deluxe standard. And who knows, perhaps they'll revisit FoC Shockwave as a Voyager... or even in the Prime line.

As far as the rest of the GDO wave goes, I'll probably pick up Swerve, but not much else. I have a FansProject Warbot: Defender as my "Classics" Springer and quite happy with it, so no need for the two-mode GDO figure. I considered Hotspot, but I already have that mold in Grappel and Inferno flavors, plus he's not a combiner. I don't like to say never, but it probably won't happen. Nothing else from the series calls out to me, although I would like to get a closer look at the Brawn if it ever sees release. 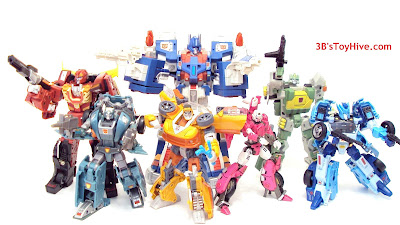 Anyway, Wheelie is definitely a nice addition. He didn't make it here in time to go in the season 3 display, but I made sure to pose him with his Autobot team for a pic.